Success feels good.  It was a weekend of knitting  and other successes.

First up is the completion of a pair of socks. 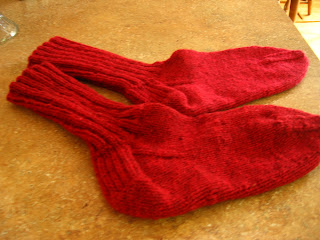 Socks suffering from Supreme Second Sock Syndrome.  Sock number one was knit in 2010 for the Need A Sock? book.  Sock number two was finished Saturday.  Knit with  Briggs & Little Tuffy, my favourite 'big sock' yarn.  At 44 stitches on a 3.25 needle, they will fit a largish lady's or smallish man's foot.  Not destined for any person in particular, they will go in my gift-to-be basket.

Much more  beautiful than the practical socks is Stephen West's   my   Spectra. 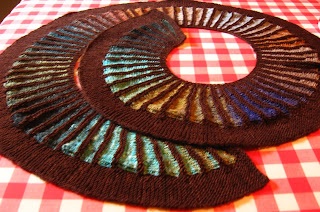 Finished and awaiting blocking, it is gorgeous.  I managed 82 wedges before burn out.  There was a shortage of the brown Malabrigo but still I probably could have squeezed one more wedge.  The fingers are itching to start something new, so 82 it is.  Laurie M of Issues with Knitting  told me a while back that the first yarn to end would be the Malabrigo. To compensate for this, Laurie has knit the pattern with ten instead of twelve edge stitches.  Saving two stitches on each wedge, should give enough plain yarn to do all 86 wedges.  Smart knitter that Laurie. That's a tip I will remember should I ever decided to knit another.

Success number three is my strawberry cake.  Fred suggested we try the jiggle cake - cakello  - of Friday's blog post  before we served it to our guests.  Bleh!  Yuk!  Eight point five times too much  gelatin powder does indeed make a difference.  Into the garbage it went and off to the grocery store I went.  Cake number two. 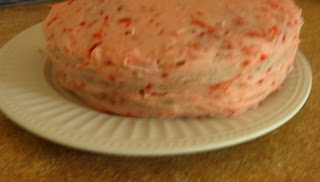 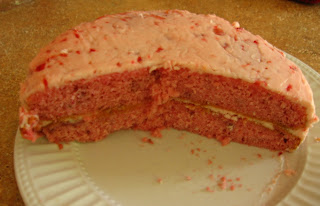 Think so.
Posted by Brendaknits at 2:45 PM

That baking has math explains my cooking. Flashes of brilliance and the rest makes your eyes water.

Three very worthwhile achievements - especially the sock after such an hiatus. I hope you're patting yourself on the back.

I think you're tempting me into a Spectra. Very ingenious pattern.

I had to giggle at your second sock syndrome. That's a long one! Glad to see you got it done.

that cake does look good! love the socks and the spectra.

The Spectra is beautiful and the cake looks yummy.