Today I present to you - still just a bit damp, from the blocking - Miss Scottish Sweatrrr.  So named because it is meant to match and be worn with a pleated Scottish wool skirt I scored at the Church garage sale and because its original incarnation was as this pattern -   Sweatrrr.  And  when you think about it, the Scots roll their RRRs.  So, a perfect name.   When Sweatrrr, after three atemps, still  didn't match my vision, I turned to my tried and true.  Elizabeth Zimmermann and in this case her Fair Isle Yoke Sweater.   Rather than second choice, in the end, I am more pleased with the fair isle yoke cardigan because its  style  seems more in tune with  the vintage-ness of a pleated wool skirt. 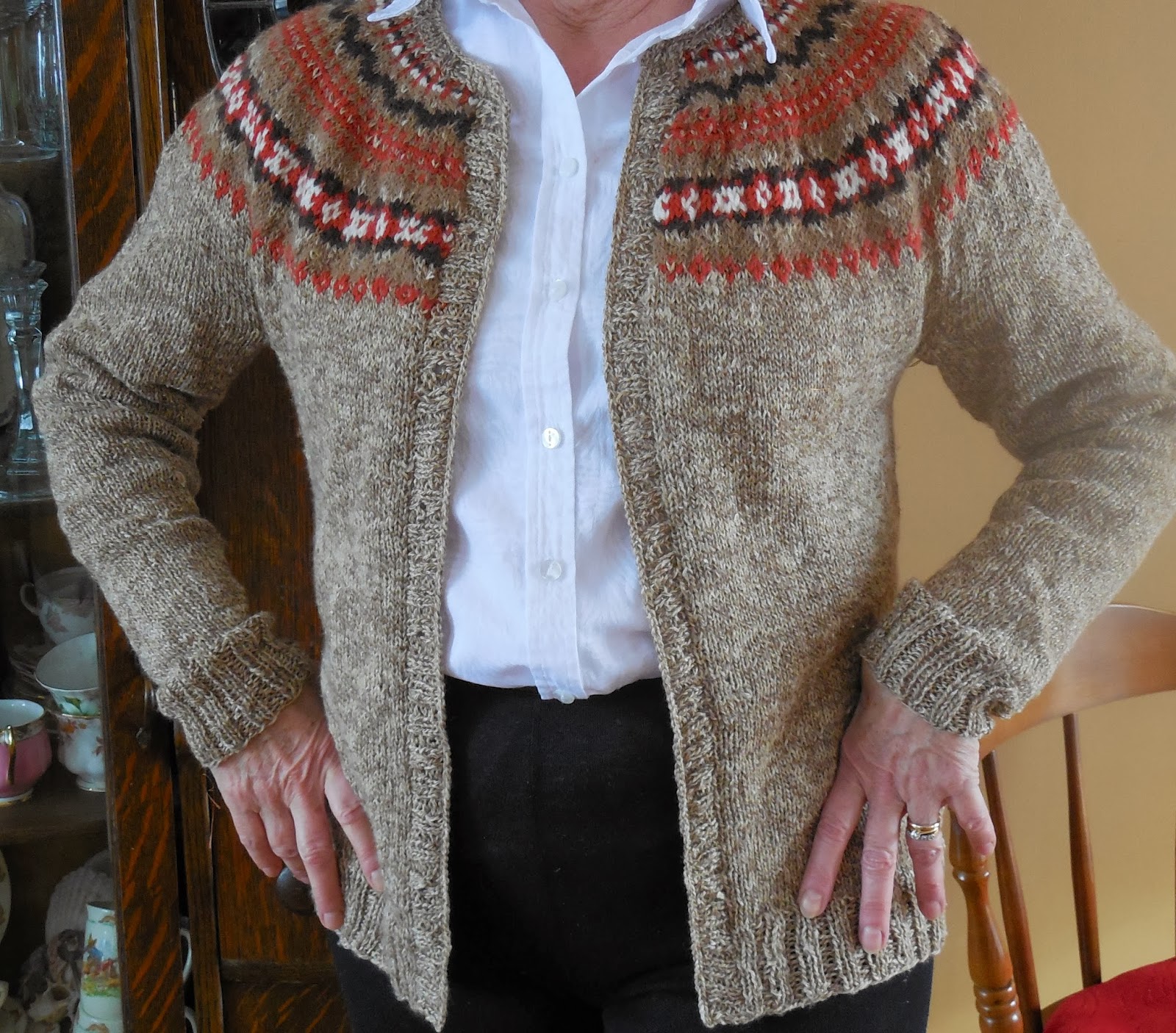 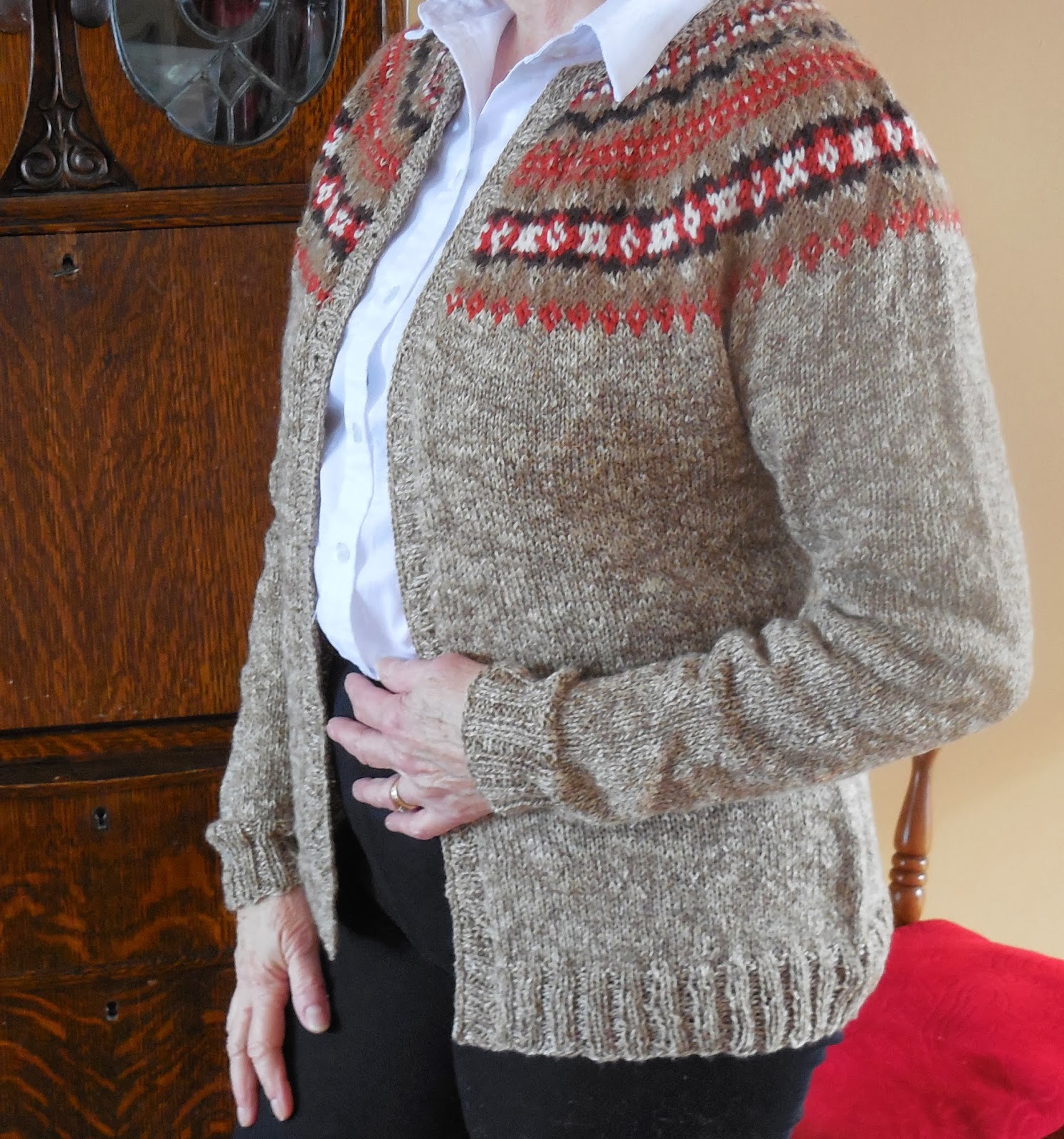 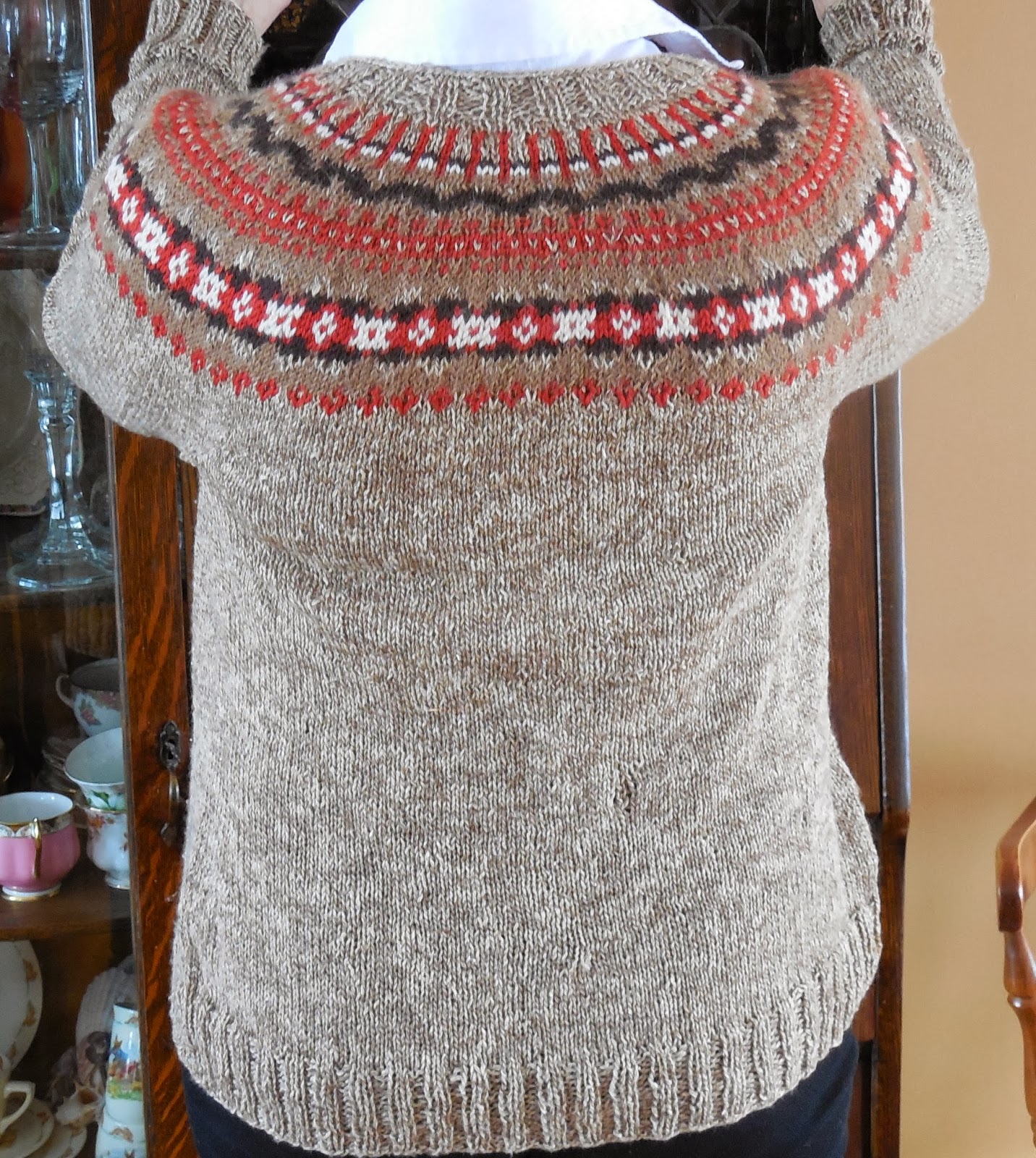 Details:
Pattern:  Eliazbeth Zimmermann, Fair Isle Yoke Sweater
Yarn:  Body knit with 3 strands held together.  2 strands of Centolavaggi Chine Lace Weight wool in a brown tweed along with one strand of Pollyanna  Hand Dyed, Polyester, Flax and Silk  All from stash.
The yoke consists of a couple of stash yarns - the brown and the caramel. The white and orange are both Cascade Superwash 22 Sport weight.

Needles:  4 mm for the body and lower bands of both body and sleeves.  3.5mm for the button bands and neck trim.


Modifications:  Yes  some.
I added waist shaping by 3 sets of decreases above the hip area, straight knitting through the waist then 3 sets of increases above the waist.  All done at the side 'seam' line.
I made the front half of the sweater a  Half Plus.  Deb Gemmell taught me that in her
Need A Plus Size Cardigan book.  In that book she reminds knitters that  most women have bigger fronts than backs and suggests that we make our sweaters like that.  More anatomically correct -like Ken and Barbie.  I accomplished that goal  by adding bust darts from the underarm out towards the bust to increase each front side by one inch.  Two inches total for the entire front 'half'.
I also made this pullover into a cardigan by adding 5 steek stitches up the centre front and cutting it open.  I did a crochet steek which Meg Swansen taught  me in a previous knit and which I have come to prefer because there are far fewer little threads to tidy up.

Did I Learn Anything?  After three attempts to make Sweatrrr work out for me, I learned that new is not always best.    Back to basics for me.
I learned how to take Deb Gemmell's instructions for a top-down bust dart and reverse the info to get a bottom up bust dart.   Could I ever to it twice?  Probably not.

Did I Make Any Mistakes?  Yep. I was intrigued by the neck trim on Alpine Tweed, Jared Flood's design from Ann Budd's Top Down book.  Completed with short rows to raise the back neck as is not uncommon, but leaving the front neck only  a few rows deep which is not common.  It gives  a  slanting form to the front trim.  I liked it.  Opposite to most finishings which start with the neck trim followed by the vertical bands, this design, I thought, would work better if the vertical bands were complete before the neck band was started.   But  - I forgot that placing the top buttonhole a half inch from the top of the vertical band - as is common - would actually make that top button about three fourths - ish -  of an inch from the top once the few rows of neck trim were added.  Is is bad enough to rip back?  Nah! 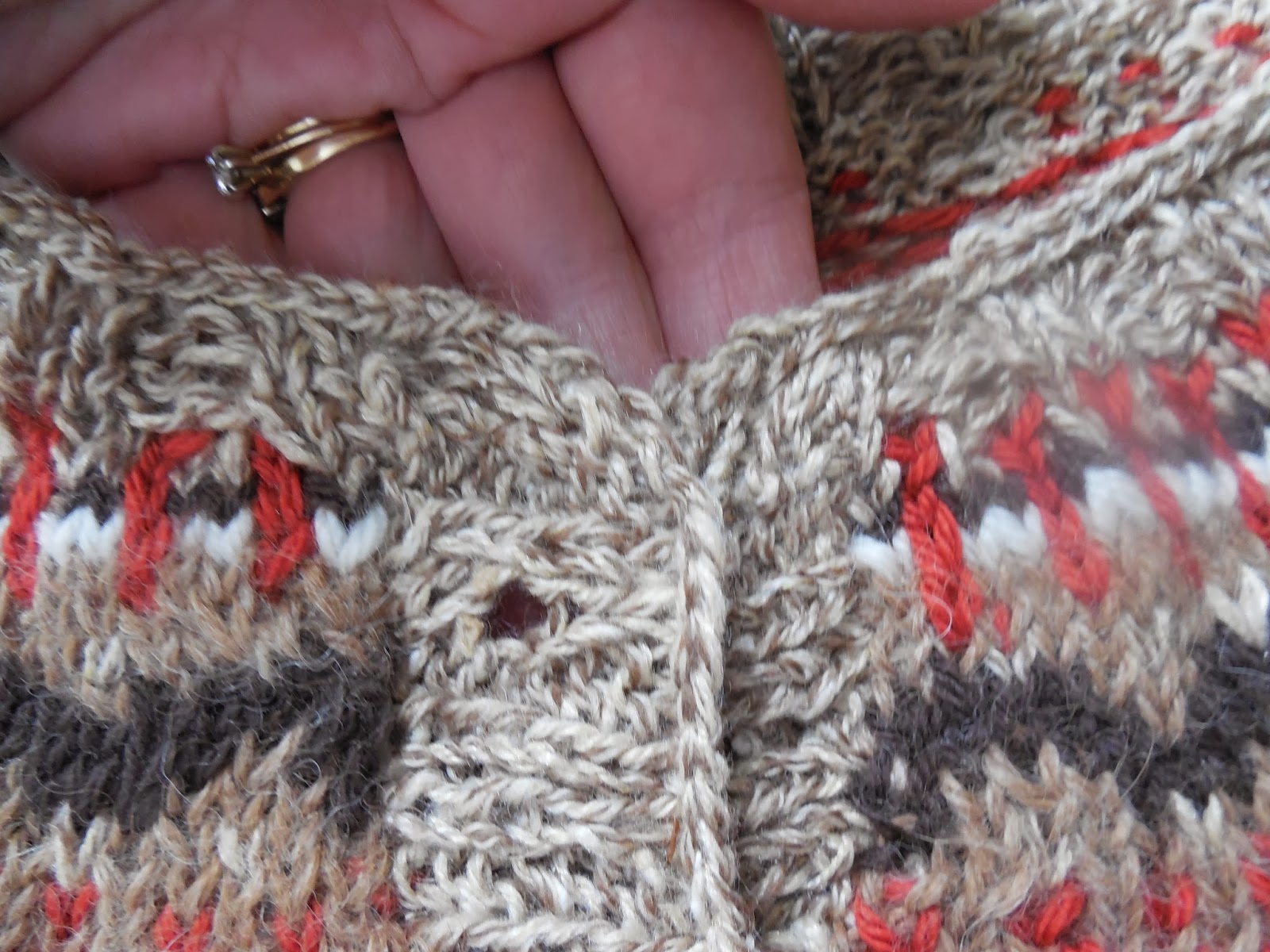 And the other mistake I made concerned the yoke decreases.  I read EZ's  3 step decrease  instructions then read Meg Swansens's  revised,  4 step instructions.  decided I liked Meg's better, then proceeded to decrease at Meg's 4 step rate but only at 3 locations -  as per Elizabeth's original pattern.  What happened?  Well - I reached the top of the neck, put the stitches on  a  piece of yarn to try on the sweater and said "What the heck?"  The neck was VERY wide.  Was it worth ripping back?  It might have been.  But a fix was worth a try.   One more row with a bunch of decreases and it looks fine.  Whew!

All in all a great knit.  Nothing beats Elizabeth for trustworthiness in my books.  I hope the sweater lasts me as long as the skirt has done its previous owner.  If so, I'll be wearing it for years to come.

Posted by Brendaknits at 2:59 PM

I love it Brenda..you nailed it this time! Beautiful fit.
teresa_a

Ah, so THAT is why all those cardigans that don't close in the front give me a chill! Thank you for explaining about women's anatomy and how to knit for that anatomy. Love the FO-rrr!!

Absolutely Fabulous! And you are so right. EZ all the time perfect and sensible.