Knitting for babies is the best thing.  They never complain.  Never roll their eyes.  Never say they don't like it.  They let their knitting aunties be as silly  creative as they like and sleep right through the trying on and wearing of  the latest hand knit to come off the needles.

At least,  at less than a month of age, I am hoping all the above will be Baby Jack's reaction to his new Santa hat. 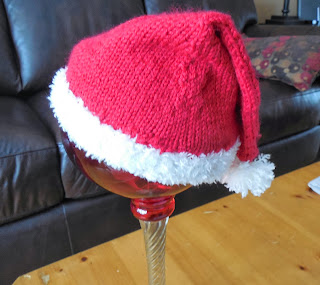 Needles: 3.75 mm
Mods:  I knit the ribbing with a no name fuzzy white yarn purchased in Romni's bargain basement.  I also put a pom pom on the tip of the hat instead of the I Cord tassels.  Most importantly, the 64 stitches that Nancy said to cast on seemed way too small to my eye. So again I referred to my Hat Encyclopedia and cast on 88 as it suggests for the   newborn size in DK yarn.

So cute.  I hope Baby Jack likes it.  Washable wool so Mom will be pleased.
Posted by Brendaknits at 10:55 AM

Oh that is adorable!