When  knitting, rarely do I admit defeat.  Even when clearly I am defeated, I carry on regardless.  I  finish the garment and declare 'Never  Again.'  But rarely do I say 'uncle'.

This summer, though,  I have been defeated.  Twice.  By the same project.

Early in the summer,  this pattern, Contrasts 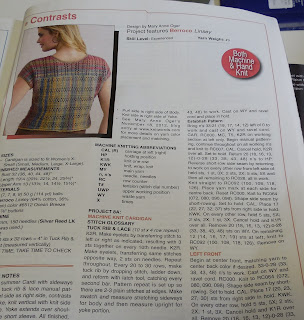 At Riverside Yarns, one rainy, spring day when co-conspirator Wilma and I decided to escape the damp weather by doing a yarn run, I purchased 5 balls of Sirdar Crofter. 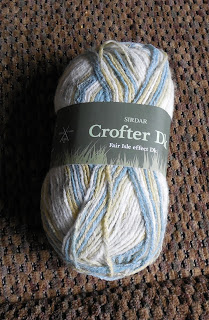 Despite the different colour, Crofter so closely mimicked the yarn used in the pattern that I thought it would be perfect for Contrasts

And there is nothing wrong with the yarn.  It is me.  But I prefer to blame it on  the pattern and/or  the designer or maybe both.  My first attempt was on the machine. And guess what?  I was able to do it.  But it was not fun.  There are so many things going on at the same time with this pattern -  dropped stitches, yarn overs, short rows and more.  The yoke is knit separately from the body of the sweater, and there are three pieces to that yoke.  I was into piece number three when it occurred to me that I was not having any fun.  I know, slow learner.

For me, it makes sense to use the the machine  when a pattern calls for miles and miles of  boring, plain, straight, stockinet  knitting. The intricate, interesting  knitting is what  I want to do by hand.  I  asked myself why I was struggling with this complicated knitting on the machine.  When I couldn't come up with a good enough answer, I asked myself if this maybe was a pattern that would be better knit by hand.  The answer to that was Yes!

But the summer passed and it wasn't until last week that I got around to starting  re-starting Contrasts.
Defeat wasn't long in coming.  Either my brain cannot understand the special genius of Mary Anne or the pattern is poorly written  not for me.  I admitted defeat after a mere couple of attempts.  Life is too short.

Down, but not out, I decided that  Sirdar Crofter will look just  lovely as a simple, side to side, (vertical striping that way)  short sleeved, summer cardi.  And just like my  bread  bath salts from yesterday's post, Mary Anne's pattern has gone into  the garbage.
Posted by Brendaknits at 2:07 PM

If it isn't fun to knit it isn't worth knitting :)