Finally, finished.  Contrasts, the nifty little number that, in early June, I thought I would machine knit, is finally finished.  In a totally re-invented sweater.  You might remember that I wasn't having any fun knitting Contrasts on the machine.  Since the pattern included both machine and hand knitted instructions,  I switched to the hand knitted version.  For about 10 minutes.   The pattern escaped me. For the second and last time, I gave up on Contrasts.

Following that failure,  I went pattern diving in my extensive collection and came up with a pattern I initially knit probably 25 years ago. 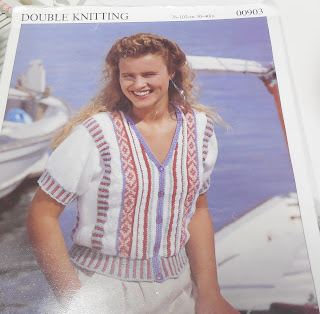 The  pattern called for several different yarns.  Knit side to side, the multiple yarns created a very interesting, vertically striped sweater.  Since Crofter has it's own variety of colours, I didn't need any other yarns to give it that vertical look.  Here is my version.  Instead of Contrasts, I think I should call mine, Contrarian. 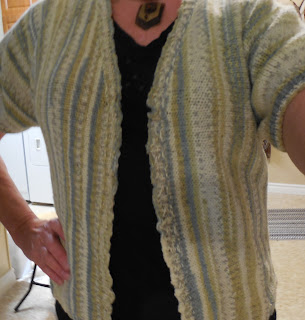 Pattern:Sirdar 00903
Yarn:  Sirdar Crofter, DK Weight
Needles:  4.5 for the body and 3.75 for the trim. A bigger than called for needle because - well, can't really remember my thinking there but  that is what I did.
Mods:
1) I knit the bottom trim at the same time as the sweater by doing a series of 2 rows garter, 2 rows stockinet. 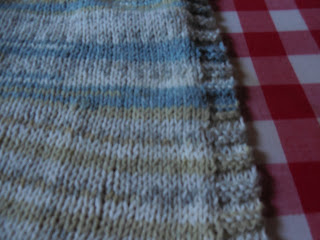 2)I added short rows to give more hip  belly  room.  I did them at Rows 20 and 40 on both the front & back and both left & right pieces.  Eight short rows in all.  Good thing I did.  It  just meets nicely in the middle. Without those short rows, there would have been quite a hip-gap.  I did those short rows by working up 20 stitches, wrapping,  turning and working back to the beginning of the row.

3)The ruffled edging is a result of several other types of edging giving me the frights.  I finally chose this ruffle one, 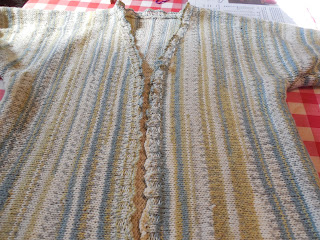 and worked it  by knitting 2x2 rib for 5 rows, then one rwo of Kf&b in every stitch followed by the cast off row.  This gave a very loose row for the cast off which was good.  And it lies flat.  Another bonus.

4) Knit to pattern, the underarm area had lots of fabric.  Too much for my liking. Once all seams had been sewn, I re-sewed a deeper, second seam under the arm to get rid of some of the excess.

Not a highly technical cardi, but after so many trials and errors with Contrasts, I am completely satisfied to have a wearable piece - finally finished.

Are you more tenacious or clever? I can't decide...very impressive indeed!