Thanks goodness everyone else at knit group today was lively and well.  I'm still battling a two-week- old cold and now have a severe case of Laryngitis. 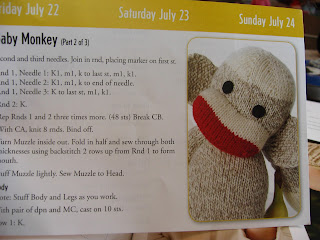 Using Briggs & Little yarn and a pattern from a 365 Days of Knitting calendar, she is knitting both monkeys at once. 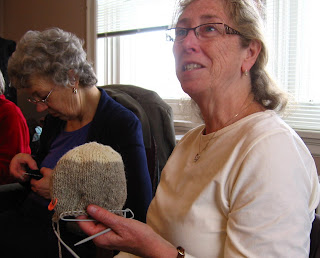 That should prevent the dreaded second monkey syndrome. 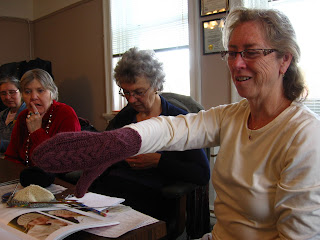 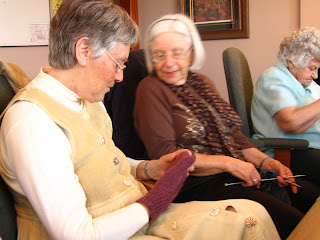 Knit flat and then seamed, claimed Mona.  But her seaming is so expert that we had trouble finding it.

Doreen's curly scarf is giving her grief.  Both Bonnie and Nicki have made these scarves and Bonnie  tried to help.

But apparently this pattern is a bit different and it wasn't long before she handed it to Nicki.  That attracted quite a crowd. 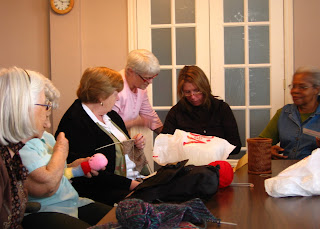 Pat, seen here with a  just-finished toy, has the project to take all projects. 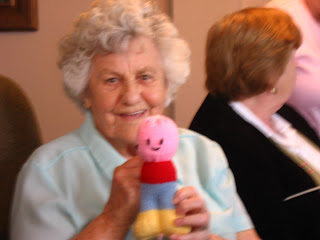 She intends to knit the Royal Wedding.  You've go to be English, I think. 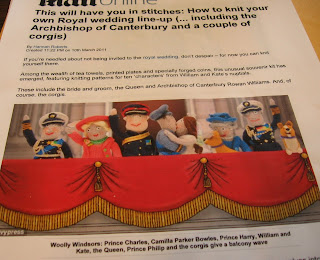 A universal remedy for my cold was suggested at knit group and I decided to come straight home and try it.  Doreen from Guyana, Ingrid from Germany and Gloria from the UK all suggested rum in a hot liquid with lemon and sugar.  Tea was mentioned.  Woo Hoo!  I sure do feel better now.  Or maybe I just don't remember that I'm sick.

Posted by Brendaknits at 5:54 PM

Honey Brenda Honey! There is suppose to be something healing in the honey. So I believe you'll have to make another drink ;-)

So sorry you are voiceless! I'm fighting off the same thing...crazy people come to choir practice with NO voice and then sit next to me. ugh...

I'm going to laugh about "second monkey syndrome" for a LONG time!