The One Hour Hat

I've often been mislead by knitters who  knit faster than I.   The Two Movie Hat   did come closer than the Six Hour  Sweater , but still, neither made their deadlines.

But Wilma's One Hour Hat was just that.  One hour. A quick little crocheted cutie.  Double crocheted all around except for the butterfly which is the chain stitch stretching over nine double crochets. Four rounds  like that and on the last 'butterfly' round a single crochet in the centre ties them all together forming the wings of a butterfly.  Cool!  Finished off with a round of single crochet and the hat is on the head in less than an hour.  Perfect for the "I want it and I want it NOW' set   me.  Pattern can be found here. 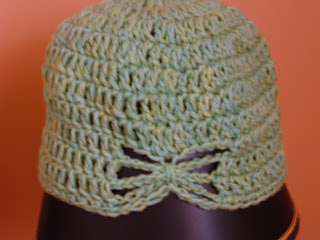 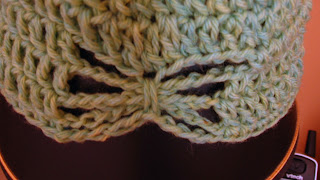 Thanks, Wilma.
Posted by Brendaknits at 10:34 AM

Really cute pattern! I'm working on another 5-Hour Baby Sweater. I think the first one took longer than five hours, but I'm keeping track this time, just to be all OCD about it. LOL!