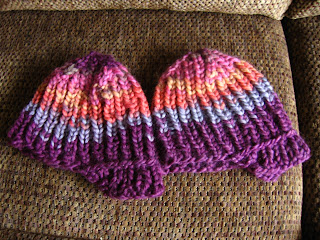 This is one quick knit.  Perhaps not a One Hour Hat but darn close. Knit with bulky yarn - I used Indie by Sirdar, and on large needles - I used 10 mm, this hat is  a 'done before dinner' project.

A few tips regarding this pattern.  When starting the decreases for the crown, the pattern DOES say "work 8 (9) stitches"  but my brain  read knit 8 (9) stitches.  It took a few rounds for the needle to drop before  I realized,  " Hey this doesn't look like the picture".   A short 'rip' and I was back on track.

The hat is knit first, then stitches picked up for the peak which means the cast off row is the outer edge of the peak.    This requires a very loose cast off  to allow the peak to achieve maximum peak-ness.  The peak on my first hat  under achieves.  Knitting the second hat, while working the cast off row, I inserted three extra stitches spread evenly across the row.  A much perkier peak.

And lastly, I always, always, make increases or decreases one stitch in from the edge.   Even though the pattern called for the decreases on the peak to be worked at the edge, I used my superior knitting knowledge (Superior to Sally Melville? Really, what was I thinking?)  and worked the decreases one stitch in from the edge.  It didn't look that good.  With hat number two I followed the pattern as written.  Much better!  Hmmm.  I guess Sally's been doing this for a while. 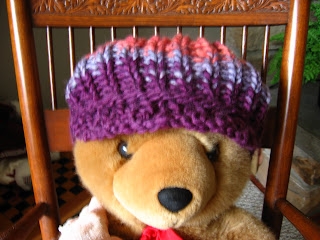 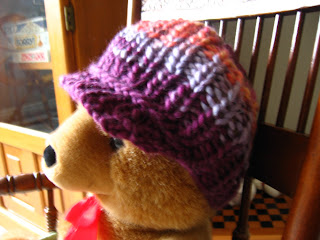 Very cool cap. I too amaze myself at trying to out-guess the professionals!

I have tried to outsmart "smarter" patterns as you did in your "one stitch in the from the edge" approach also to be quickly put in my place but the opposite has also been true when I trusted the pattern despite knowing better and wished I'd applied a bit more critical thinking when working a project. 'Seems often its a question of knowing the source rather than the tricks!

Very nice hats. I really like the cool colors in the yarn. :-)