To Party Or To Knit

My knitting plans goal for the weekend was to finish the mate to the solo green sock I've knit for James for Christmas. 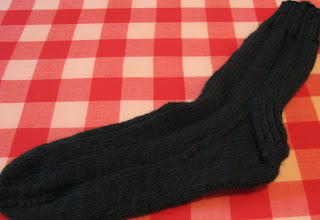 That box of gifts needs to leave Thornbury soon! My plans were well founded because we were off to visit my sister - a three hour drive from home. That's a total of six knitting hours.

Going over, I did well. I finished the leg AND the heel flap of sock number two! The heel turn and foot I left for later. Wrongly, as it turned out, expecting some quiet, conversational visiting/knitting time. Heck no! The four of us can still party hardy. Unfortunately, we don't recover quickly. There was no knitting time as Sis' house. No problem, there was still the three hour drive home.

As soon as I buckled the seat belt, I picked up the needles. A round heel was the aim, and knowing that my heel flap had 28 stitches, I knit across to two stitches past centre. A few rows later, I was out of stitches on one side and still had some left on the other. What the heck? Counting was required. Oops! I had spent the three hour drive over to Sis' house creating a heel flap on the incorrect number of stitches. Rip!

Picking up little, tiny, sock stitches in the car, with poor lighting and bumpy roads didn't go well. In the end, I gave in, put away the sock and slept. Home again, Fred was off to a Grey Cup affair. Me? My partying time was over. I stayed home to knit. The sock now has a correct heel flap, a turned heel, and most of a gusset.

The box has to go soon. Mid-week, perhaps.
Posted by Brendaknits at 8:16 AM

I hate that when it happens... and you want to be productive on car rides... Slept? That's novel! I'm going to really try to take my camera AND take pictures at knit nite. Which of us will succeed?