Third time is supposed to bring on the charm, but the 'sweater to match the Dragon Fly necklace' (STMTDFN) I want to knit for Abi is testing that point.

Once I realized my sizing was way off, I looked for a different pattern. Thank goodness, I suppressed my knitterly denial on this one, otherwise I would have finished the sweater, not simply the yoke. Not to be fussy, but I decided to look for a pattern with the same gauge of yarn as mine and a pattern sized for a child, not an adult.

That took a few hours of magazine reading research.

In the end I settled on Morgan's Cardigan from Teens & Tweens. It is definitely for a child and is 'close' to the same gauge as mine. Using a slightly larger needle, I think I can make it work.

Searching a bit early for that charm - after all it was only the second attempt - I cast on.

It's a top down pattern, with the cast on being at the edge of the collar. Ingeniously, the cast on is done with a much larger needle to give the collar enough fabric to turn without resistance or rolling. I remembered the larger needles but managed to work about 2 inches of the collar, before I realized I was working the wrong size. Abi is bigger than the doll-sized sweater previously started, but at nine, she sure doesn't have a 40 inch chest. Rip!

Third time's - well still not so charming. I was only into the collar by an inch this time when I realized I had forgotten to cast on with the larger needle. Rip.

Fourth time's - well, just too late at night after a tiring day to be correct. Rip.

Fifth time's on the needles now 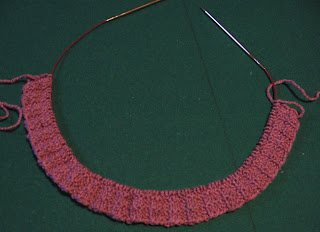 and I'm sure the charm is just around the corner. Elusive it might be, but not impossible. Of course, that could be my knitterly denial talking.
Posted by Brendaknits at 7:20 AM

What a time you are having. I totally sympathize. When things get going like that for me I go and read a book for a whole day and ignore my knitting completely. Then I start again. Here's hoping you can turn the karma around.

You have so much more patience than I ever would!