Morgan's Cardi - known in this house as Abi's Cardi - is finished. 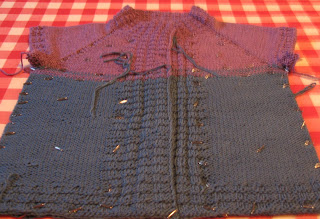 and ready for the tying in of ends, it's finished! Buttons, hopefully on the weekend. Notice the very loose definition of finished here.

It fits my vision perfectly. A cute, little, cardi vest knit especially to show off the Dragon Fly necklace I am giving Abi for her Christmas Day birthday. 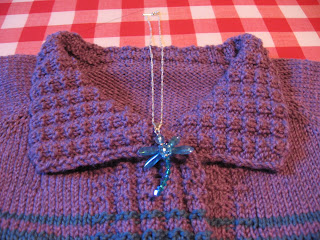 This pattern is from the Cabin Fever book Teens & Tweens. I made the second size - with a 31 inch finished chest but shortened it to 16 inches as per my instincts and Mom & Dad's confirmation. Other than sizing and the two-colour version I knit for Abi, the only major modification I made was to knit a smaller collar. The pattern calls for a five inch collar. That seemed to me that it might overwhelm little Abi, so I made it three inches instead.
The purple Zara yarn photographs poorly, looking drab and more pink than purple. In real life, it's a delightful purple heather. Purple being Abi's favourite colour, it made sense to couple it with the blue Cantata Crepe for the body of the sweater.

The pattern was well written and easy to follow, but I would make a couple of changes if I were to knit it again. Knit top down, the sweater begins with the collar. To help keep the collar from tugging tightly across the back of the neck, the collar cast-on is done with a large needle. Next time I would not only cast on but also knit a row or two before switching to the smaller needle. Just to really relieve the tugging problem.

The only other change I would make is to re-locate the buttonholes. The pattern calls for nine stitches to be knit before working the buttonhole. A few less stitches would put the buttonholes closer to the edge which IMO would be a better location.

PS. You might have read the comment from Kim, Abi's Mom and my DIL a few days ago. I incorrectly mentioned in my post that Abi will turn ten! Not so. She will be nine this Christmas Day. Mom commented that I must have too many grand kids because I can't keep their ages straight. I'd like to ask who's fault is that? :):) LOL!
Posted by Brendaknits at 8:05 AM

She will love it. And thanks for the neck tip. I am just about to knit something that starts with a collar, and I'll bet this is gong to solve my fitting concerns too!

Such a pretty knit! And perfect with the lovely necklace. Lucky g'daughter.

Oh, and if you're anything like I am, you might tell your DIL that it's a good day when you can remember your OWN age without having to "do the math". ;-)

I just love that tonal colour transition! What a lucky grandkid, a birthday on Christmas *and* a handknit sweater!