Early on this summer, seven year old Abi, leaned her chin on the chair where Iwas was knitting and very wistfully and very dreamily told me the story of her long-lost hat.

It was a much-favoured hat with ties under the chin and 'thingies' that covered the ears. And on top there was 'the cutest little' Pom Pom. Abi, very wistfully and very dreamily said " I loved that hat. I don't have it anymore and I miss it."
Well, well, well. How much of a hint does a knitting Grandma need?
Now Abi has a new hat with braids, 'thingies' that cover here ears and a lovely little Pom Pom on top. She loves it.

Problem was, so did her Mom. Once Abi finally took it off , Mom put it on. Abi had to coax to get it back.

Well, well, well. How much of a hint does a knitting 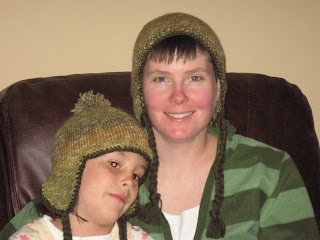 Grandma need? So I knit another. Identical but a bit bigger. Twin hats.
Posted by Brendaknits at 10:41 AM

Oh I like the darker green constrasting trim and braids hanging off the ear thingies!