And the title goes to -
Megan. She is definitely 'productivity queen' this week.

She made a vest like Nicki's. The one that starts as a blob 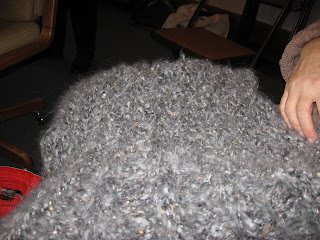 and finishes as a work of art. 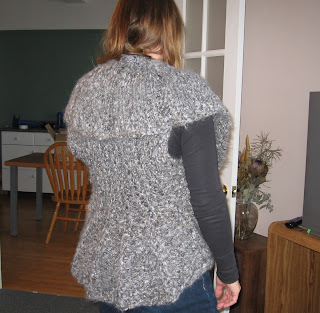 Megan used lighter-weight yarn than Nicki and cotton versus Nicki's Mohair. And guess what? A totally different look.

Looks great on me too. Although, since I'm the photographer, you will have to take my word for that.

With that vest done, Megan was on a roll. Look how much of this top

she finished this week. Megan's storing up productivity because she knows that for the next few weeks she won't be doing much knitting. Her hubby, the one she hasn't seen in how many months? arrives from Australia soon. He is staying for five weeks,and I suspect that Megan might be too 'otherwise' occupied to come to knit group.

Poetic Pat has finished her baby outfit in Popcorn stitch.

Before leaving today, Pat treated us to a recitation of one of her poems. Next Wednesday, we are heading over to Southampton to visit the knitters that came to Meaford last month. I told Pat to practise her poems as I'm sure the Southampton group will want to hear them.

and one almost done.

She used this yarn. Marble by James Brett.

And Doreen shows off a great ear flap hat.

But her 'pièce de résistance' today was her salute to the Red Hat Ladies. I imagine when the Red Hats see this,

Doreen will have a new career.

And now off to see Survivor. Thank Goodness! New stuff tonight.
Posted by Brendaknits at 4:57 PM

Nice pages!
we like your blogging style and we want to advertise your blog.
If you want us to link your blog in our site,
put us in your blogroll, write in a mail :

1. your site/blog address;
2. a representative image of your blog (if you have one);
3. a detailed description of your site.

we would be honored to advertise your blog on our blog!
anyway my friend, keep on with your great work!