Thursdays Are For Knit Group - But No More Survivor Until Fall

Thursdays are for knit group. Thankfully, unlike Survivor, knit group takes no summer break.
Production never ceases! Look what is happening this week. 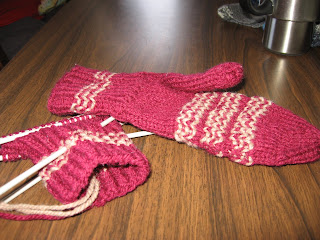 These are Joanna's mittens. Great colour work.
And Wilma is trying to convert herself to continental knitting. It is great to have two methods at your finger tips - no pun intended - but it's no easy task retraining those fingers. 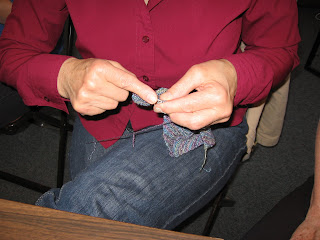 And here is Nicki in the TD PF R SS KAL. She's adamant that it was not a race. But she's done and I'm still on sleeve number 2. If it had been a race, Nicki would be at the stage where by-standers are congratulating her, giving her cold drinks and cookies, pats on the back, smiles all around, directing her to the podium to receive her ribbon. Me, I still climbing that last hill.

And she's just as elusive about having her picture taken. "Not my face. Not my face" she said. 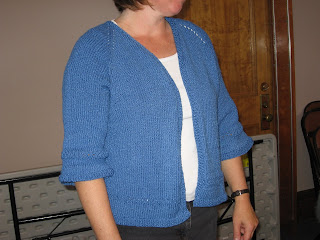 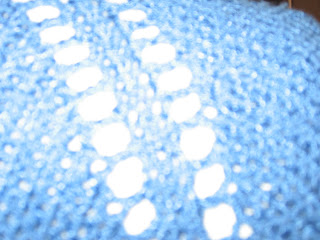 Her seam lines. Done with a Yarn Over to give it an open lacy look. Nice, eh?

Then the cries went out for a photo of both of us. I had to stand on Nicki's right so the needles in my unfinished sleeve didn't jab her. 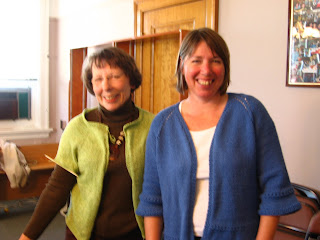 And she forgot all about the 'not my face' rule.
Thursdays are for knit group. And ain't it grand?
Posted by Brendaknits at 4:50 PM

Brenda,
I would like to thank-you for helping me with my wonderful top-down no pattern sweater. I love it and have had many compliments. Thank-you.

You are very welcome.