When, a few days ago, I blogged about starting the second Opal & Mohair sock, I mentioned that I started it with a provisional cast-on. Why did I do that?

With Opal and Mohair spread all over the rec room couch and threatening to become so tangled I might never get sock #2 at all, I had a brain wave. The pattern repeat was off - or short - only about eight rows. But parts of the pattern repeated themselves within the total repeat. If I used a provisional cast on, when the sock was done, I could find those eight rows in the leftover yarn. Pick up the live stitches from the provisional cast-on and knit up. And that's exactly what I did.
Can you tell which is which? Bet'cha can't. 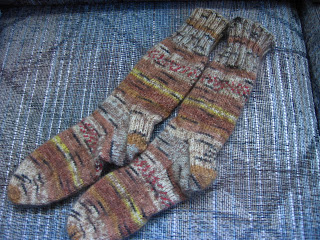 It's the one on the left.

Posted by Brendaknits at 1:39 PM

You sure are clever!

That was genious Brenda, and the socks are awesome!! I had the same problem with a pair of opal socks a couple of years ago and I was NOT as smart as you [smiling].