August means canning at my house.  Top of the list today is the sweet pickles.  Called 9 Day pickles  in kitchens across the country for generations, yet recently named, in my kitchen,  Scummy Pickles.

A few years ago one of my neighbours asked me for my recipe.  With this variety of sweet pickle, the cucumbers sit in a salt-water brine for 9 days.  During that time they become very scummy.  And they stink.  Following the brine period, they are washed a few times then put in a vinegar/sugar solution which gives those cukes the best taste ever!  (especially  since I omit  the Alum  and have drastically reduced the amount of food colouring traditionally used in Grandma's day)

So used to the scum and the stink have I become over the years that I didn't think to mention it to my neighbour when she took the recipe.  As a result, every day for 9 days, in a state of shock and disbelief,  she called to say   " Brenda, these pickles are really scummy.  Are they supposed to be that scummy?"

It was a puzzle to her, that first year,  how anything that started so disgustingly  scummy and stinky   could possibly be the delicious pickles that she had tasted at my house.  Since then she and I have re-named the 9 Day Pickles, Scummy Pickles.

One more day of syrup solution to be poured over these and they will be ready for jars. 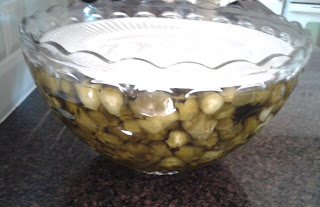 Once the pickles have been attended to, I move on to my knitting.  The Serendipity Vest is bigger than it was. 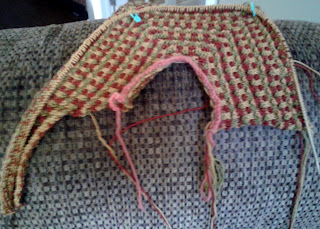 Though I can only guess at where I am.  I am hoping that the designer, like Elizabeth Zimmermann is a genius and has published a pattern that only makes sense upon completion.  Hoping.
Posted by Brendaknits at 11:43 AM

When I knitted Elizabeth Zimmermann's Surprise Baby Jacket I was torn between the distress of not knowing where I was and pleasurable anticipation about how it would come together. I hope that for your vest the pleasure is outweighing the distress. Good luck! But I do want to see the completed vest.