Not so with Serendipity Vest.  And to make it worse, I can find no mention of the pattern on Ravelry and therefore no one else who has ever knit it.

It is one of those lengthy, wordy patterns.  Eight pages in total.  Lengthy and wordy versus clear and concise.   My first issue is that the pattern does not state clearly where the start point is.  As mentioned in an earlier post,  when I first began the vest, I thought that I was starting at the arm pit and working up, down and out from that point.  Having knit several inches on my first version, I can now tell you that I was right.
Dear Designer, a simple statement to start the pattern would  save knitters much head scratching.

Then comes these instructions:  Before you begin next row, using a 2nd skein of yarn (or remaining yarn end of 1st skein) knit cast on 38 sts with next colour in sequence for remaining armhole.
(?? remaining?? Have I already knit one??)    Cut yarn and place these live sts on a stitch holder.

I kept knitting until the next major bit of info gave me another  stitch count and said to start the 'V' neck shaping.  The stitch count was supposed to be 101 at each end before the corner stitches.  Well of course I had one side that was at 101 but the other side was short.  Guess how much short?  Right - 38 stitches.   See the difference? 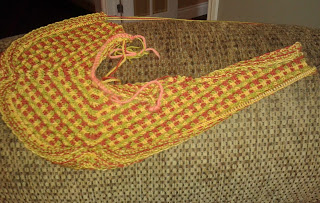 According to the hand drawn schematic, mine didn't look right. 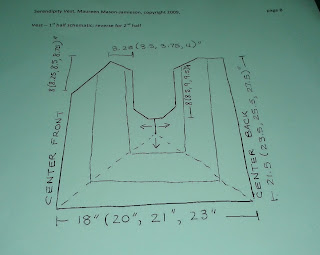 Rip. At least a week's worth of knitting, gone.
Dear Designer, Just becasue I'm retired, doesn't mean I have nothing to do.

Oh - and see that orange yarn at the centre of the work?  That is waste yarn used for the crochet
cast-on.  At the very end of the pattern the designer says to remove the waste yarn and weave the two edges together.  Ah Ha! So that is what I do with those live stitches and now I better see the shaping.  Now wouldn't  that have been nice to know at the beginning!
Dear Designer - Tell the knitter where she is headed so she can enjoy the journey.


After ripping I cast on for a vest of my own design.   I would steal the slipped stitch pattern from Serendipity, work it  from the bottom up, all in one piece.
Dear Designer, I do NOT feel guilty about stealing your stitch pattern.

But before I really got into my own version, I decided to take a stress break.  Knit on something else for a night or two.  And when I did that I began to think - well, why not try Serendipity  your way, Brenda?  Why not cast on those 38 stitches at both the beginning and the end of the row.  Afterall, if the vest has to climb the armhole in the front, it makes sense it has to climb it in the back as well.  So  - Take Two.

If this version doesn't work out,  the designer will get a real letter.

Posted by Brendaknits at 9:16 AM

Did you forget where to find me?☺ I'm retired, too, and might just have a bit of spare time to help solve a problem or two.☺

Sent you an e-mail.