Sheer Panel Top, a pattern I first noticed in the Summer 2013 issue of Vogue Knitting, is finished. 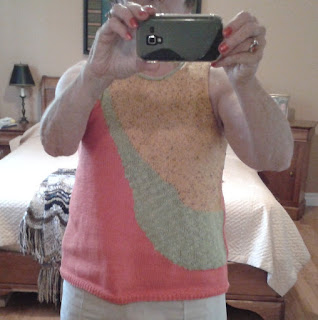 Two years  from inspiration  to completion.  About average for me.

Pattern:  Sheer Panel Top from Vogue Knitting,  Summer 2013 issue.
Yarns: Coral - Super 10 Cotton.  Green -  Americo Cotton Flamme. Yellow -  Cotton Tweed.
It took a ball and a bit  of the Super 10, all but a small amount of the ball of Cotton Tweed and about a third of a ball of the Cotton Flamme.  The Super 10 and the Cotton Flamme were scores at last fall's Knitters Fair.  I purchased them for  $4 each.  The Cotton Tweed had been a gift. No bank accounts were damaged in the knitting of this top.

Needles:  4mm
Mods:  #1. At the armholes, I continued to make decreases beyond where the pattern suggested stopping to knit straight.  The idea was to  better fit my 14 inch shoulder width.  But - I neglected to account for the rolling under of the un-trimmed armholes, so now I have a bit of a racer style top.   I like it still.
#2.  I wouldn't guarantee that the colour changes were worked precisely where the designer intended.

I knit this top a bit longer than my normal length, as it has a bit of an A line and is meant to drape and  swing a bit.  The Super 10, though, seems  a bit stiff for the 'swing'.  At least, in this new state, it is stiff.  Hopefuly it will get more drape with wear.

As always,  the proof is in the wearing. I have worn it twice now. 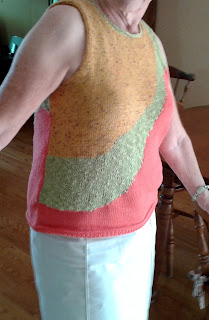 Yesterday, to knit group  where it received  many compliments.  This morning,  to the car dealership  - my car needs brakes - where it went completely unnoticed.  It feels good on though and that's the test. 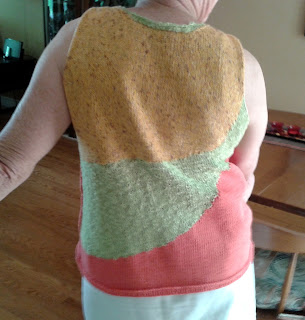 Making a sleeveless top feels so free without having to make sleeves doesn't it?

The colours remind of sorbet - cool and perfect for summer!

Nice! You/Me, we are on the same wave length! I'm all about sleeveless this summer! Love your colors!
Going to Pattie's in a few weeks for knit camp...

Wonderful swirl of color in your summmer-welcoming sleeveless top

It really does look like my favourite sorbet! Just enough of each flavour to be utter perfection!

Perfect summer color combo..cool to look at.Love that length on you.
t_a