Back From The North

20 plus hours of driving.  Tons of socializing,  visiting and getting caught up.  Shopping with grand daughter number two, Abi,  to buy her an appropriate outfit for the funeral (which she wore for the hour long service then tore home to change into sweatshirt and jeans). Picking up and delivering  Sarah, our oldest grand daughter,  from her out-of-town school.  Experiencing once again the extreme weather that is Hearst -  26 degree heat and sun followed by 2 degree cold and rain. And now home again.

And how much knitting did I do in the 20 hours of driving?  Here it is.  My little poncho to use as a cover up for my black outfit.  Not yet complete but only a few inches to go. 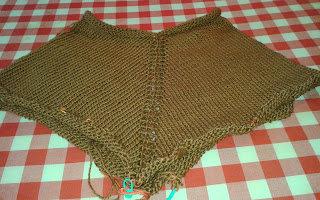 You are looking at the third attempt.  The first try, I cast on the number of stitches and used the needle size recommended in the Yarnharlot's pattern.   I didn't like the very loose look.  The Yarnharlot used wool and I was using cotton.  Those two fibres react differently  to such loose knitting.

The second attempt, I used a smaller needle - 6.5mm.  Larger than the 4.5mm the ball band calls for, but smaller than the 9mm the Yarnharlot  recommended.    But - with the same number of stitches cast on, the poncho now became  way too small.  Hard to get over the head and   not wide enough to fall over my shoulders.

Try number three, I used the same 6.5mm needle but took the cast on number from 64 to an arbitrary 84.  It seems to be working.  I want the point to fall near  my waist line - similar to  the lower right-hand sketch 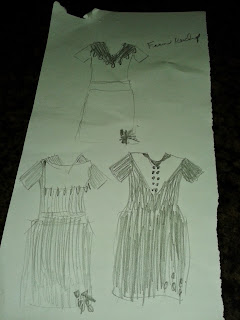 -  and I am almost there.  I estimate two more inches of plain knitting, then the Fern Kerchief lace pattern just before the cast off.

Posted by Brendaknits at 9:57 AM