Today's story is about a baby-sized,  Hippie Blue for my Great Nephew, Jack.  As I knit Hippie Blue for my niece, Jack's Mom, I realized I was going to have some yarn left over and immediately started planning a baby size replica of Mom's sweater.  I finished Mom's in time for our big family get-together on December 13, but not Baby Jack's mini version.  I said nothing to Mom, but hoped I could surprise her with Jack's sweater by Christmas Day.  And so I did.

Jack's sweater,  I knit on the machine.  That should have made it a very quick knit.    But...
The struggle with   One of my struggles with machine knitting is the lack of patterns available.  I eventually found a baby-sized, raglan- sleeved pattern online and used it as a template.  There was one issue, though.  It was for a gauge of 28 sts/4 inches.  Sock yarn gauge.  I was using Cabin Fever Cotton Tweed at 22 sts/4inches.  There was math to be done.

When  the sweater was finished, the sleeves looked a bit wonky.  Additional internet research revealed that the pattern I was using gave very different sleeve directions than  a second  pattern for the same style and same gauge published by the same  designer.  I emailed her to ask which pattern would be the accurate one. Unfortunately, she replied to say she was 'slammed' with Christmas stuff and couldn't get back to me until after the new year.

Hmm.  That didn't do me any good.  More research.  A third pattern was found.  Still for sock yarn - what is it with baby sweaters out of sock yarn?  But this pattern  was for a dropped-shoulder style.  That straight, rectangular shaping, I thought, would be easier to translate to a different  gauge.  Rip effort number one and begin effort number two.

Even so, when that sweater was finished, the sleeves looked way too big around.  A 12 inch circumference at the upper arm.  Wow!  Almost adult in size.

Rip.  New sleeves reduced to a ten inch circumference were what I settled on.  Partly because the 25th was only hours away and partly because I really had no idea what circumference was best for a one year old for whom I was knitting a size two sweater.  See how things get confusing?

Anyway, the sweater was presented and  thrilled over. It fit and has been   worn.  No better thanks than that.  Take a look at my Hippie Blue Twins 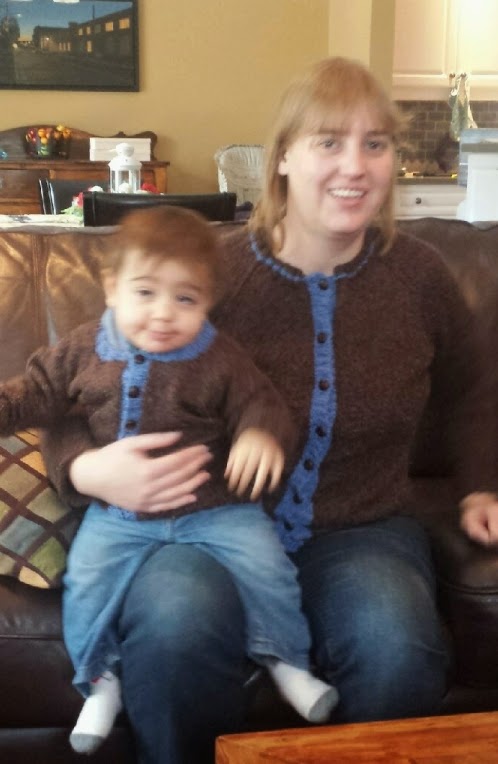 Posted by Brendaknits at 1:59 PM

Happy New Year, Brenda! I admire your persistence and problem-solving with the little blue cardi...and it sure paid off! Lovely pic and projects!
~ Gina

adorable! And can I suggest investing in Sweater Wizard software? Not expensive, and you can plug in the size and style of sweater you want , and it spits out the schematics and even ROW COUNTS! It's perfect for the machine.

As always, I'm in awe of your knitting problem-solving skills. Happy New Year!

Wonderful pair of twin sweaters. Look at you go.