I seem to be still lingering in the year just past - but this will be the last post about things from 2014.  I promise.  I wanted to show you  Radicchio.


This sweater was started in August and set aside for more important things, -  Hippie Blue to be precise.  Since the yarn was purchased in May at the Maryland Sheep and Wool Festival and the knitting started in August, I thought it should be finished before another year rolled in.  So after Christmas, I got to work and knit the final touches.  Just missing  buttons, here she is. 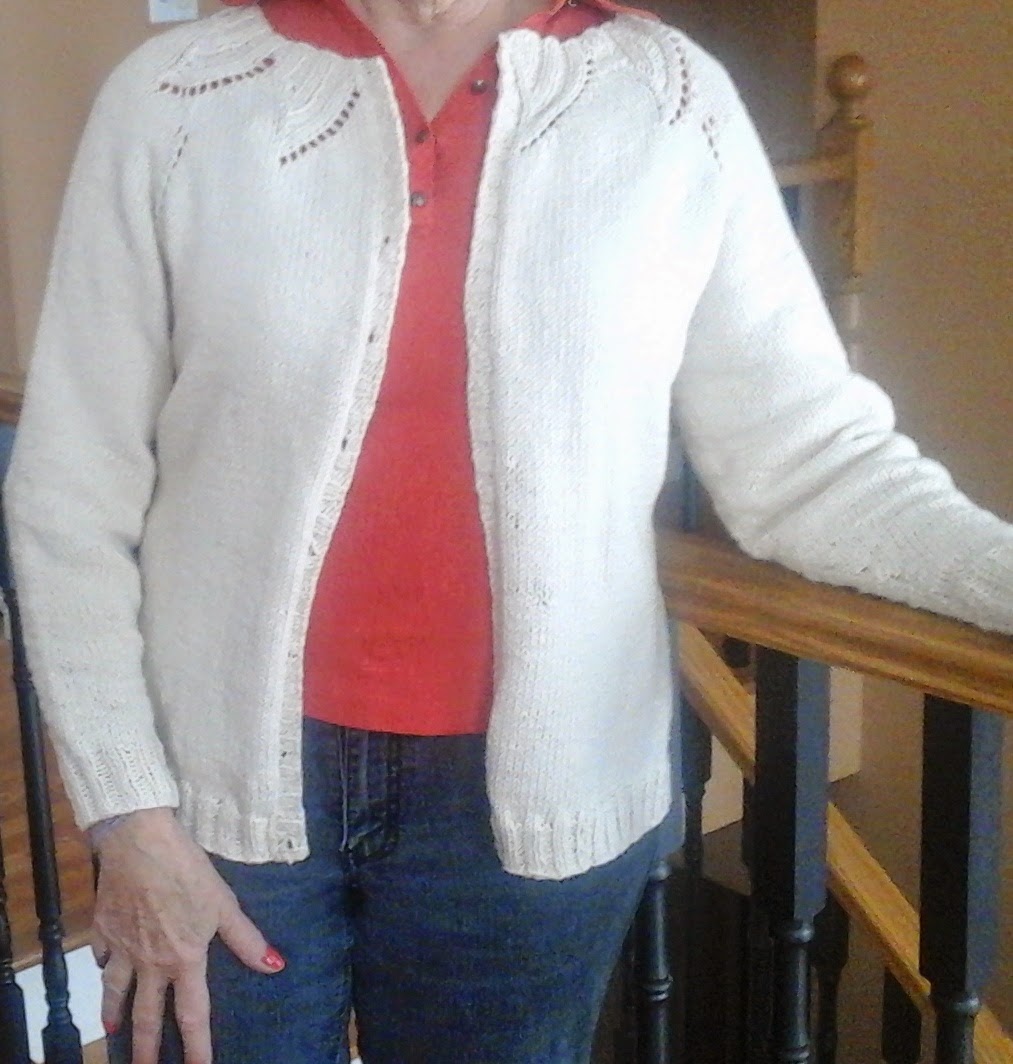 Pattern:  Radicchio by Giovanna Vacchi. A  top-down with some basic, lace work in the yoke.

Yarn:  Cestari, Heather Collection  75% cotton, 25% wool.  Knits to 20 sts over 4 inches.  Called Knitting Worsted by we Canadians, but the US label refers to the yarn as DK weight.  I have long wanted to try a cotton/wool combo yarn.  I suspect  it will offer the best of both worlds.  The coolness of cotton for a summer's day, but the memory of wool to prevent stretch and sag.

Objective:  I wanted a neutral-coloured, summer sweater with long sleeves.  I have a couple of short- sleeved summer cardis and one with 3/4 sleeves.  Fine for hot days but for cooler evenings, I wanted a colour that would go with anything and have full length sleeves.

What I Did: To begin, I started the top-down knit and did  exactly as the pattern suggested for the yoke portion.  Radicchio knits the  button-band trims at the same time as the sweater body.  The trims  were vertically-appearing ribs.  In my mind they were too bulky, not snug enough and just plain not pretty.  Check out some of the projects on ravelry to see what I mean.

On my second attempt, I subtracted a few stitches from the overall numbers given and knit just the sweater minus the trims. Those I added after completing the sweater and that gave me the same circumference as prescribed in the pattern.

Once I finished the yoke pattern, I tossed the official pattern and took out my new Need a Circular Yoke?  book.  From it, I used the numbers for total stitch count before the great divide, the bust darts and also waist and hip shaping.  That shaping was done as  the book suggests, on either side of the added underarm stitches.  This separates the increase/decrease lines by several stitches.  In my mind, they look better this way - they do not pull on each other as some side-by-side shapers do.

In addition, I added a couple of Dowager Hump short rows into the back.  If I were to knit this again though, I would add a few stitches between lace patterns across the back.  Mine looks stretched much more tightly across the back than at the front. 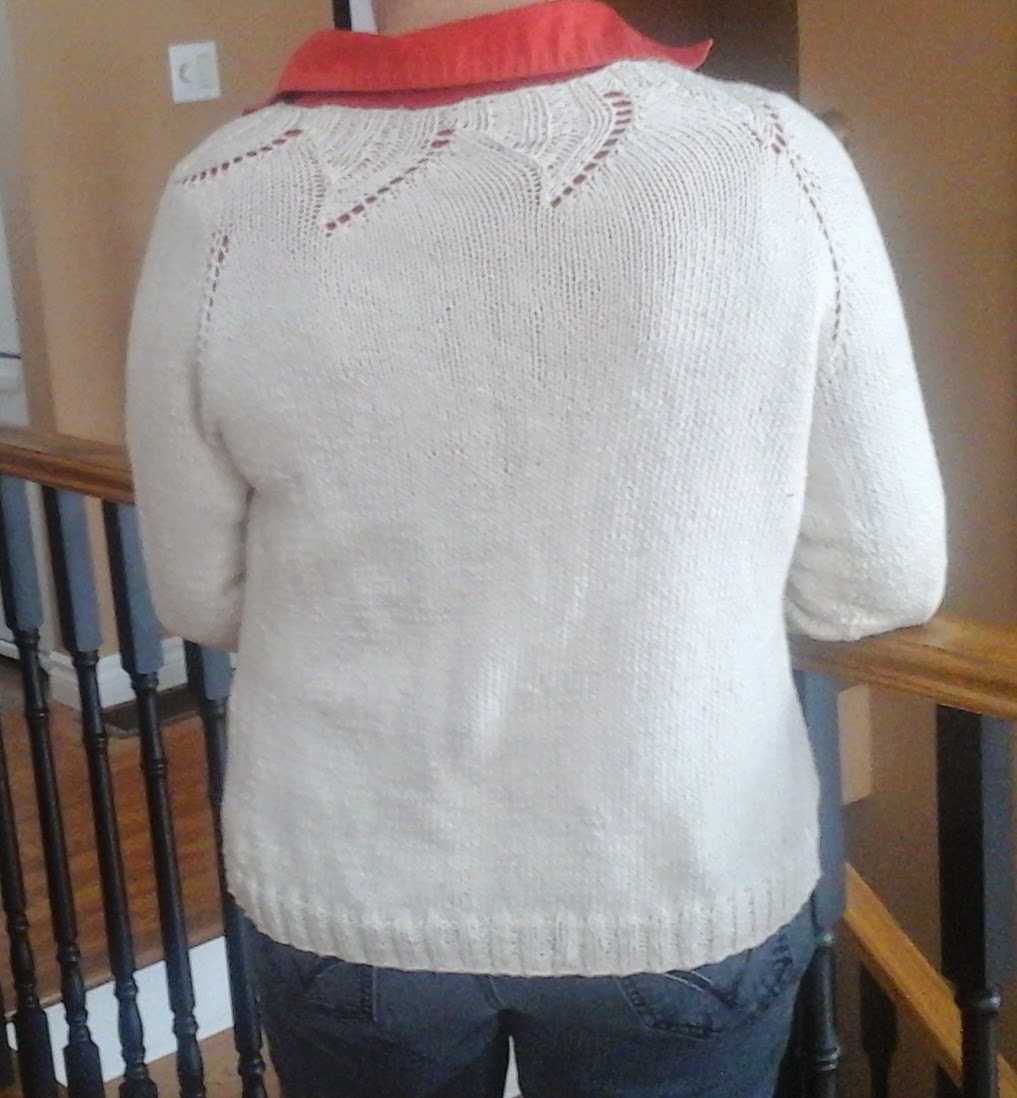 That stretching verifies the truth of what was once told to me by a customer at the yarn store where I worked. I was explaining to an elderly, little-old-lady customer  how to choose the correct  pattern size based on bust measurement.  Using myself as an example, I said
" For me, with a 38 inch bust ..."
That was as far as I got because this sweet, little old lady interrupted to exclaim
" 38 inches?  Must be all in your back!"
Radicchio proves she was right.

Radicchio fits eactly as I planned.  Not too much fabric under the arms,  defined bust, waist and hip areas and it is a perfect length.  But there  is one issue.  Having purchased only 4 skeins of yarn at 250 yards per skein, I had to get the sweater out of that 1,000 yards.  I knew it would be tight and in fact I finished with a mere 5 grams of yarn to spare. 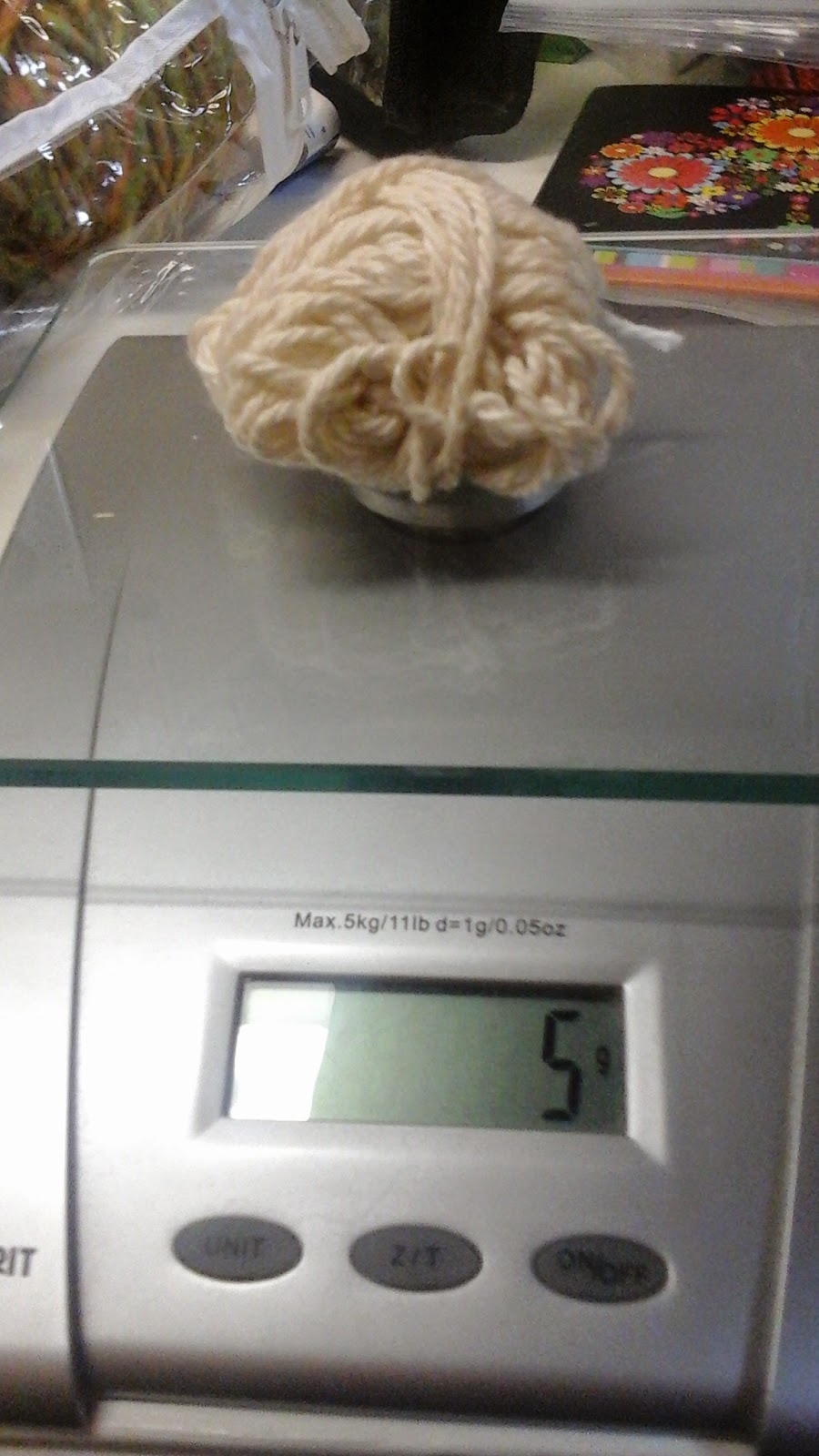 But, the sleeves are a bit short of perfect. 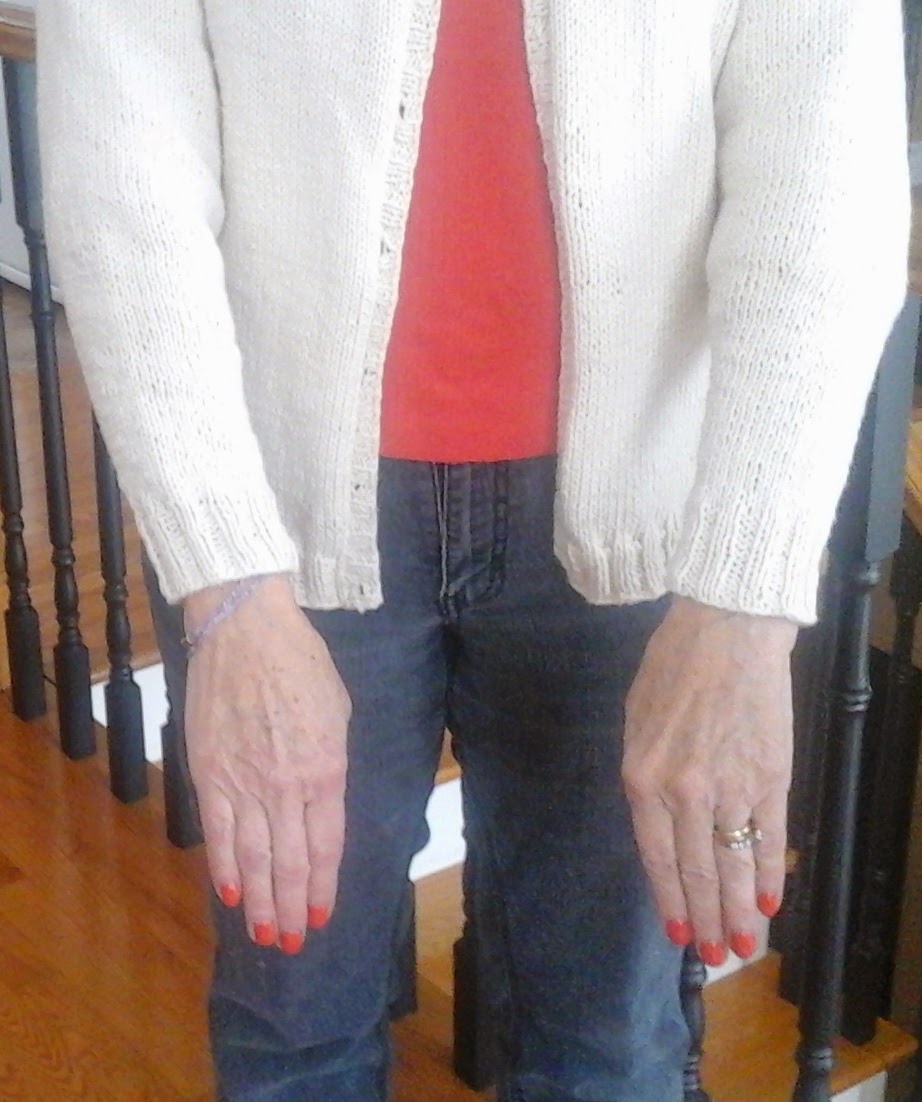 Bracelet length some might say.  Too short I say. 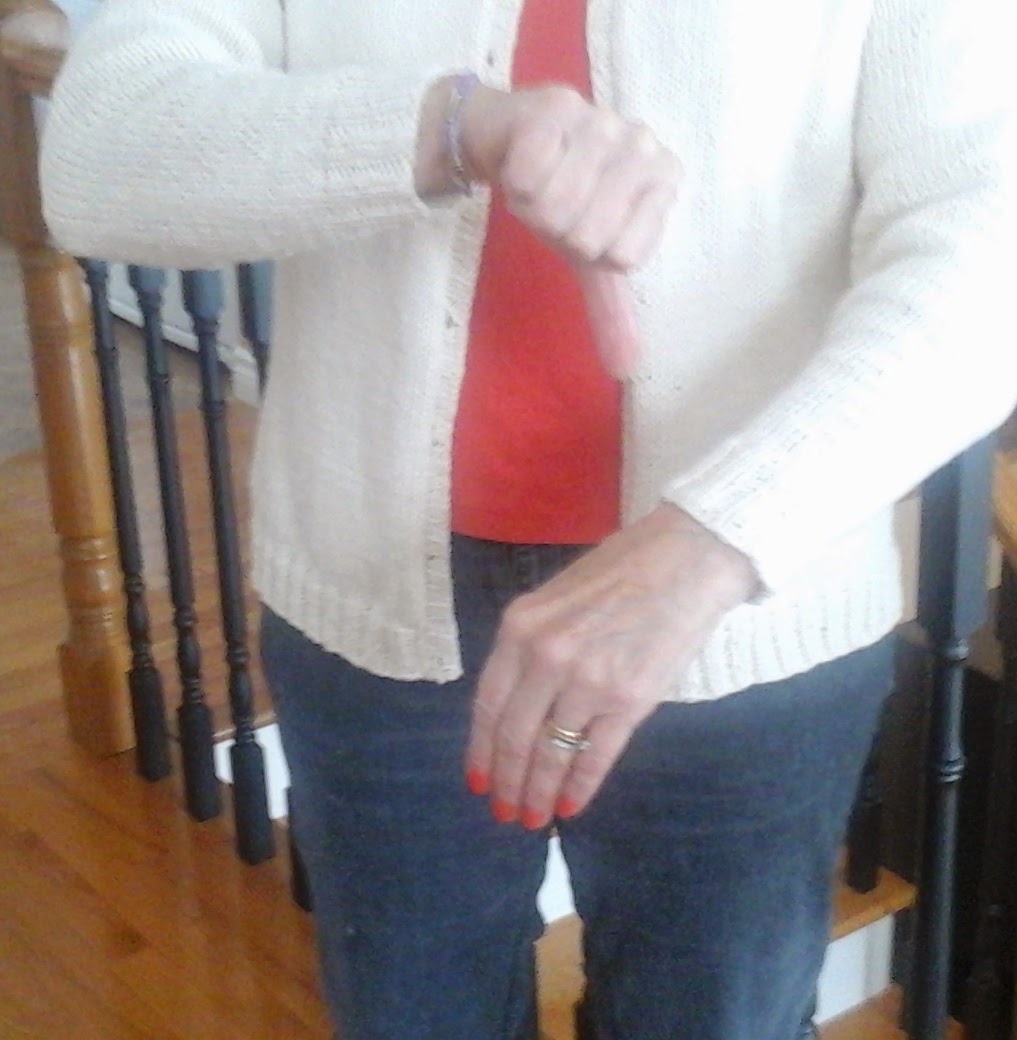 So I will divide the 5 grams into two parcels of 2.5 grams each and lengthen the sleeves.  It might just be enough.

My goodness but that is a perfect summer sweater isn't it? I particularly love that sweet yoke design!

BTW I think its perfectly acceptable to linger in last year blogwise! Its what I'll be doing for the next week for sure!

I loved your assessment of this pattern. So many look a little stretched across the back.