Lately, I have been whining about  mental overload.  One of those times in my life that I sure wished I had some drugs in the house.

It started, a month ago, with the new van. Always, in the past, we have had vehicles with the bow tie on the front  (Fred's extreme prejudice)  but this time we diverted our monies to another of the 'big three'.  One would think driving was driving, but there were so many things different about the new van, that I had a steep  curve to climb before I could even climb in.

Next was my ipod.  The van salesman told me I could plug my ipod into the van and listen to my own music.  All I needed was a cord. I bought the cord, plugged it in, and   -  nothing happened. Another learning curve to figure out what else I had to do to make that work.  Currently I have achieved 50% success with that item. I get music out of the driver's side speakers only.

Third up was a new camera.  The Hearst gang surprised me with a new camera for Mothers' Day.  What a wonderful thing to do.  It relieved me of the job of studying cameras and listening to sales reps, but of course there is still the  new-camera-different-from -old- camera curve to navigate.

Next up was WiFi.  Yep, as astonished as you will be to learn this,  despite owning a laptop, I did not have WiFi in the house.  I perused that market on the phone with the big R but had to go to the store to actually get the device, then  install it myself.  Not a bad curve that one, but still there is the curve accumulation factor.

Most recently, I decided to de-fossilize myself and get a cell phone.  One that can send those non-intrusive, text messages so favoured by the more enlightened amoung us.  Big, long, Rocky Mountain style curve here now.  First up, there were many emails arriving in my box before the phone came, keeping me informed about the status of delivery of the phone.  Every one that the big R sent, Canada Post sent a similar one saying "we have been asked by the big R to send you this email to say ..."    Double the number of emails.  Same amount of information.

Once the phone arrived, I suggested to Fred that he call me from the home phone to see if the cell worked.  It did.  It rang.  Too bad I couldn't figure out how to answer the call.  Had to call son #2 to find that out.

Then the Big R sent an email saying I had to activate an online account.  They gave me a temporary password and warned me to set my own password ASAP.  But, as often seems to happen, I ended up on one of those infernal, cyber loops. The system would not take my new password becaue it didn't recognize my temporary one. But, luckily for me, the-about-to-have-a- breakdown customer,  right there on the screen was a help desk called Live Chat.  Oh yea.  I had seen that advertised on TV.  Figuring it would be better - or at least not worse than being on hold on the phone, I logged on.  It reminded my of the old MSN system of messaging someone.  Except s-l-o-w-e-r.   By the wait time between communiques, I am sure my service rep was servicing multiple customers at one time.  My help took one hour.  As a result, I fell the big R should rename the service.  With all that dead air time, it is not so much live as dead.  It should be called Dead Chat.

All this mental exercise has done nothing to improve my mood or keep my brain healthy for my old age.  In fact, I'm sure the brain is on life support right now.  But what it has meant is that I have become quite interested in mindless knitting.  No  Cinnie lace for me.  I am working on my skirt - 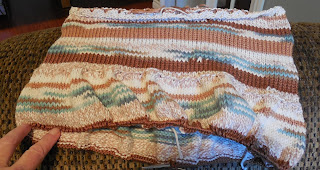 Plain old stockinet knitting.  Round and round and round.  Change a colour when I feel like it. I tried it on  to make sure  it would go  over the hips.  Seeing that it fit, I put it back on the needles and have knit comatosely since.

Have a great weekend everyone.  May all your techno gadgets work easily and as imagined.

You're scaring me. I need a new cell phone--but I'm not buying a data plan--just transferring my $13 a month (20 min. of talking a month--that I've had for emergencies and asking DH about some widget or gadget I'm supposed to pick up at the hardware store. I want a new phone because I'll get better signal strength (something about the 6-yr old phone not having the new band width capability), and I want the phone. They assure me I can do all kinds of things on it when I'm near my WiFi at home.

Well done. I would have been blubbering in the streets in no time. No patients with techno thingys.

Lovely skirt you're producing there, in the thick of the techno nightmare. Today I got a series of Senior Humor cartoons, one of which had an inset of a contented, bald senior using a cell phone, the detail of which revealed an old-fashioned dial instead of the keypads. I, too, long for the 'simple old days'!

Ha, i was experiencing brain-freeze myself, just reading all the tech adventures you had in a short time span. An overdose for sure :)
Would be great if that wealthy big R corporation would employee a few more people who need work...and actually provide customer service!
Gina