But He's worth It

Working on Fred's scarf for the last few weeks, it was the on-the-go project I took with me for  Knitters Night Out.   During  'show & tell',   I mentioned that I had first thought to use my ball of Quiviut   for Fred's scarf but after knitting a few rows, realized it was much too delicate to risk in the hands of a   man   Fred.

Instead, as I showed  the knitters, I  used Patons, Kroy sock yarn.  Two label-less balls I had purchased from my Southapton, 'crankin' friend Elena a couple of years ago.  Elena had scored a large quantity of  Kroy at Paton's Annual Tent Sale in Listowel at a very good price.  She charged me $1.00 per ball.  Fred's scarf took 2 balls.  The original plan to knit a scarf for Fred with $90.00 of Quiviut  changed to the reality of a $2, sock-yarn scarf.   "But,"   I  told the assembled knitters,  "He's worth it." 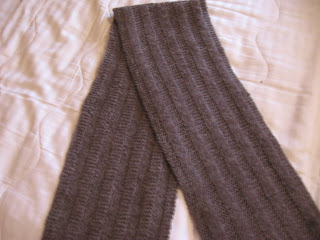 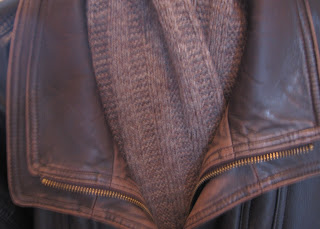 Repeat rows 1 & 2 until - as Elizabeth Zimmermann might say -   ' you get sick of knitting or run out of yarn, whichever comes first.'

Finish by knitting 8 more rows, then cast off.

I used my own version of a stretchy bind off.  I do it like this - *Cast off  5 stitches, then create a stitch by picking up the purl bump from behind the next stitch.  Knit it,  cast it off,  then repeat the process from * across the row.  This gives about 20% more stitches for the cast off  and kept mine nice and loose. 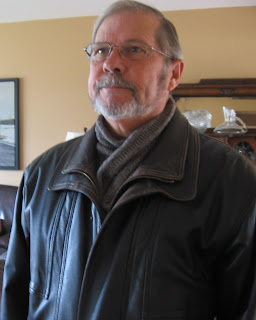 Colour suits, looks good with the jacket, matches the beard.  Should keep him warm this winter and as I said   "He is so totally worth it."

I love that cast off!

Ya know? I think my hubby might be worth it as well. Thanks for sharing your pattern.

I am going to try that cast off asap! I needed it earlier this week for my EZ square shawl. Too late for that project though. Next time!

As for Fred's ensemble, as I often say to my hubby - he may look too good to go out - 'might cause a stir among the women! "You mean more of a stir!" is always the reply I get to that!

Seriously that scarf looks so good with the leather jacket!

I think he's totally worth it! I can tell.

Great job! Any guy who would pose for a picture for his wife's blog is a "keeper".

I lust over quiviut. My wallet says "maybe". I've instructed my daughter who knits that when I die, no flowers for me....I want her to stock up on quiviut for herself.