Stashed years ago, following a day at the Kitchener Waterloo Knitters Fair,  was my pattern for Cabin Fever’s Fern Kerchief. 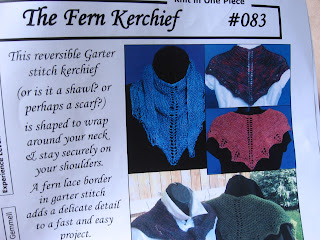 A  shawl-like scarf that appealed  because of it’s simplicity and small size.
About the same time, I stashed two skeins of Sibelle.  Rochelle of Grand River Yarns created Sibelle by spinning/twisting together a thick yarn of autumn-coloured, variegated wool with a thin strand of blue Viscose.  It reminded me of a fall day with all the colours of the brilliant woods under a blue sky.  Originally, I thought to  knit a colour block sweater making the novelty yarn one of the colour blocks near my face.  But it never happened.  Obviously my knitterly brain was waiting for the connection between the yarn and a better, more appropriate pattern to register.   In packing my knitting for summer at the trailer the penny dropped.  I knew it would look great as a Fern Kerchief.
Despite the pattern being written for two weights of yarn - DK and Worsted or Heavy Aran - neither    of which describes Sibelle, I knew that with a small shawly, scarfy, necky, wrappy thing, gauge was not crucial.  The pattern and yarn seemed made for each other.
A quick knit – something that pleases me at all times, but  especially ­­­­­ at the trailer where seasonally-specific, summer activities can really disrupt knitting tim­­­e, my Fern Kerchief is complete.

Envisioned as something to wear  atop a white blouse in the fall or winter,  it is, even after blocking, a bit scratchy.  So most likely  it will be Black Coat Art for me.
I used approximately 100 metres of  Sibelle  or  about one and a half skeins - far less yardage than the pattern recommended.  But with Sibelle being much heavier than the prescribed yarns I simply knit until I reached my desired, centre-back depth then began the lacey ‘Fern’ design.  That approach has produced a 14 by 40 inch shawl.  For me a perfect size.  Big enough not to overwhelm, but certainly big enough to do what a shawly, scarfy, wrappy, necky thing is meant to do.
This turned out to be a perfect yarn/pattern combo and  given the scratchiness surprise, a much better use of the yarn than a colour block sweater.  I’m happy.
Posted by Brendaknits at 10:57 AM

Perfect! I love the description... I'm right there with you, and it will be perfect for the little neck thing you need with Fall jackets! Really interesting colors, too.

The variegated yarn is fun. Glad you enjoyed it Brenda.