I have made a new knitting/world-wide-web friend.  It started last winter when  the ‘Wednesday Afternoon Gang’ at Grey Heron chose to do a KAL.  The KAL project they mutually agreed upon was anything that involved thrumming.  Hats, mittens -  they didn’t’ care   as long as they learned to thrum.
As their ‘teacher’ my self-imposed  requirement is always  -   I can not lead if I do not join.  So I decided to KAL with them and to knit a thrummed hat. Blogged about here.
I no sooner published that particular blog post about  my finished, thrummed hat when I received an email from ‘J’ in Nova Scotia. Having already had some thrumming experience with mittens, she was taken with the hat and wanted to knit one herself.  “What pattern did you use?” she asked.  I replied that I actually didn’t use a pattern,  per se.  Instead, I used my ‘Need A Hat?  book to establish the number of stitches to cast on, then simply inserted thrumbs every few stitches, every few rows.
A number of emails followed.  Firstly, ‘J’  couldn’t find the ‘Need A Hat?’ book in her neck of the woods and emailed to ask if I could get her started.    After learning of her gauge,   I answered with the number of cast-on stitches that I thought would work.  ‘J’ did well with the beginning of the hat, then emailed to say she was stuck on how to  decrease for the hat top.  I rattled off a quick decrease sequence based on  multiples of eight that suited the number of stitches in her hat  and thought she would be fine.  Not so.  Instead of reducing to a few stitches ready to thread yarn through,  ‘J’ somehow had 42 stitches remaining.
At this point in our email correspondence,  it occurred to me that the thrummed hat  might be ‘J’s first hat and  I enquired if that was the case.  Indeed it was her first.  I backtracked and emailed more details about traditional hat decreases and was soon rewarded with this picture of ‘J’s  great hat. 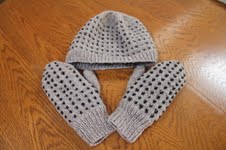 By now, ‘J’ and I were email buddies.  When her next kitting issue arose, it was natural she thought to  contact me.­­­­­­­­­­  She asked  if I might know someone who had a particular, baby-pattern book.  ‘J’, thinking she was long done with baby knitting, had no sooner donated all her baby patterns to Value Village when she learned   a great, grand baby was expected.  She was asked to knit for this new baby and specifically  to knit the family-favourite pattern.  With, I’m sure, fingers crossed she went searching for her own books at  Value Village.  But dang!  They had been sold.
As knitterly fortune would have it, I happened to have that very same  baby pattern book.  A friend who owned two copies had given it to me. Having never knit any of the garments from the book in the many years that I had owned it, I felt it would be put to better knitterly use in ‘J’s hands and I mailed it off to her.
In exchange, I have received a lovely card with a little gift tucked inside.  As well, there was an open invitation in which ‘J’ said   that for as  long as she owns her house, Fred and I have a place to stay whenever we might be in her corner of Nova Scotia.
The world wide web of knitters.   Isn’t it wonderful?
Posted by Brendaknits at 11:19 AM

I know it all started with scientitsts at CERN, but the way things have worked out, they actually built it for knitters.