A couple of weeks back, I stopped into Meaford's tiny version of Winners -   a privately-owned store with the big W's buying strategies.  There, I spotted a 100% Linen, summer vest.  Very light-weight, knit in a drop-stitch pattern, longish, A-line and  sporting a one-button closure. 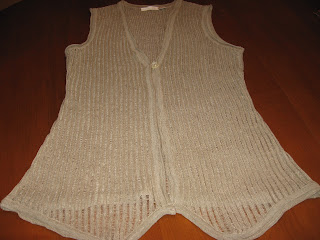 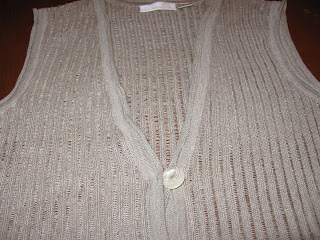 A perfect layering piece for summer - or more importantly - New Orleans.
Leaving the store with vest in hand, I did   what I most often do when on the main street of Meaford.  I stopped into the LYS to chat with  the owner.  There, I noticed, on the bottom shelf, some Baby Bamboo in the exact same colour as the vest in my bag.  At least under the fluorescent lights it was the exact same colour.  In natural light, it's close.  "Well now I said,   "wouldn't that  make a great scarf for my new vest?"    Indeed it would.  Three balls came home with me.

A few days later I was back.  Having decided that the best look for the scarf would be one of a combination of neutrals, I had chosen some shiny white from stash,   but came looking for some 'shiny' black.  A thin black ribbon did the trick.

There were a few false starts trying to  get the colour proportions just right - the vision was mostly taupe with a dash of black and white. 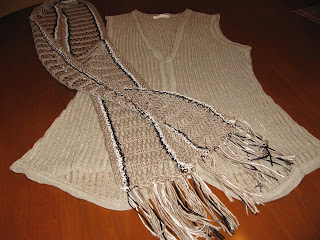 The addition of the black and white means the scarf will look dashing over  both colours. 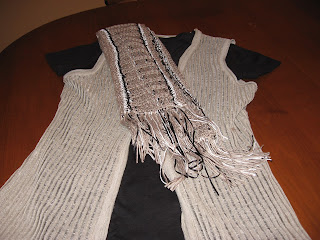 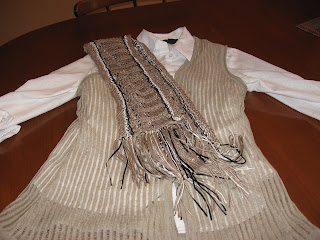 I see tees with  summer skirts or capris.

Bordered by a few rows of garter stitch, the centre of the scarf uses my favourite scarf stitch - K1, YO K2tog.    I knit it lengthwise, casting on 180 stitches and used the yarn tails for fringe.

It is a 'Just In Time' scarf.  Finished yesterday and blocked last night.  Ready for the suitcase this morning.
Posted by Brendaknits at 10:15 AM

This blog is turning into a fashion blog! What fabulous combinations you've "put together" (literally!)

fantastic! I love the vest and scarf over the black tee - very stylish. You're making me want to go beyond my jeans, yoga pants and hoodies!