Tanya,  with  a new work assignment for the next few weeks,  left today for the far, far north.  Sharon, if not already gone, is leaving soon for a much needed vacation in the far, far south.   We missed you both at knitting today.  Nicki leaves Saturday for the mid-south - Georgia,  to attend her daughter's wedding.  Such a travelling group.  The rest of us knit on.

Marlene has knit several hats since the last time her work schedule  allowed her a free afternoon to come to knit group. 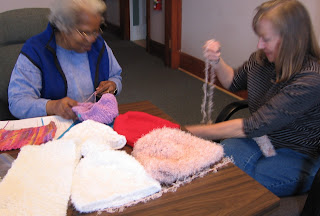 Doreen obviously enjoyed trying them on.  Knit your own darn hat, Doreen! 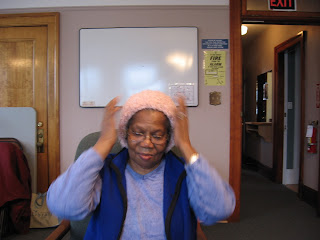 Ingrid was wearing another famously, lovely piece.  I admired the great mitred corners on the neckline and loved the colourful buttons. 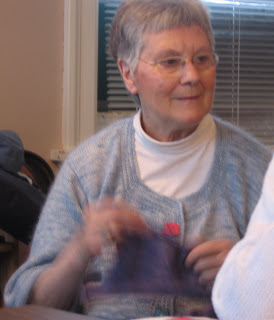 Wilma finished her Nimbus, knit with the specified yarn - Peruvia Quick.   It garnered much attention and Ingrid asked if Wilma would help her knit one!  What?  Who would think Ingrid needs help?  But everything Ingrid knits, she knits pattern-free.  She has difficulty reading patterns because English is not her native  language. 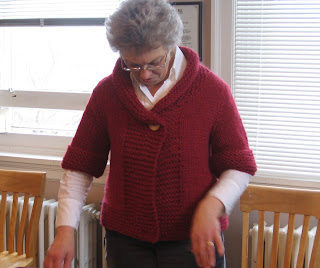 It looks lovely on you, Wilma.  Wilma choose to knit Nimbus with a larger-than-called-for needle which resulted in  a much more open neckline.  I like it.  Taking a cue from my Nimbus, Wilma   made her jacket two inches longer than the pattern suggested and shortened the amount of  garter stitch trim.  Modifications that make yours perfectly perfect, Wilma. 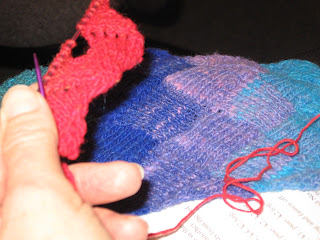 This one, like the first you see there, will be knit with Noro and should make  good car knitting.  It's a long drive to Georgia.

As the laughter and giggles pour out of the room, the library staff, I'm sure, must wonder  what we are up to.  Any knitter could tell them - Yarn, plus needles, plus knitters equals fun!

Posted by Brendaknits at 7:27 PM

A long drive to Georgia, indeed! LOL! Love the Nimbus. :-) There's nothing more fun than a rowdy knitting group.