Following the Baby Trilogy and Woodsman's Thick Socks, all small and quickly done, I think I am ready to tackle the 50th Anniversary Cardigan. (picture on left)

This cardigan design of Elizabeth's, found a few years ago, was written on a scrap of paper, never previously published and released on the 50th anniversary of Schoolhouse Press. Not normally a big, yoke-cardigan fan, this one, nonetheless appealed. Most likely it was a 'stars alligning' thing. An EZ pattern, a special anniversary, an intriguing story behind the design, and the great colour combo.

That year, 2008, at the Kitchener Waterloo Knitters Fair, I purchased the yarn for the sweater. My cardigan will be done in this monochromatic, caramel and vanilla colour scheme. In Alpaca. 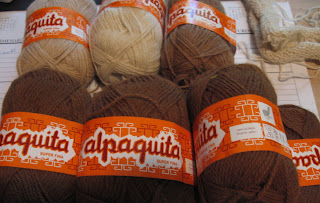 The ball band on this yarn gives no gauge - Don't ya' love that? But given the stated needle size of 2 1/2 - 3 1/2, I can see it is a fine knit. Not only will I be using EZ's design, but her method of gauge swatch first, then knit-to-my-gauge methodology. Again.

And should I be able to finish it before Saturday - HA! stop right now. That will never happen. But Saturday, I put away the needles for awhile. Saturday is the day the Grand Kids arrive.

They will 'vacation' with us until early July when we all head back north for the remainder of the summer. Once they arrive, there isn't much knitting time energy. Elizabeth might find herself on vacation.
Posted by Brendaknits at 7:58 AM

Aw...love the pic of your grandkids. You'll have a great time with them!

I love the Alpaquita yarn - can't wait to see the cardigan (never did find that "picture on left").

Elizabeth recommended a Pi shawl, no lace, for family vacations. It's in the Knitter's almanac.

The anniversary cardigan looks a lot like the aspen leave pullover in Meg Swanson's Knitting. I've always wanted to make that one, but with the proper gradations of color.

Do I detect a hint of 'imp' in the young master in the middle?

You'll have so much fun! Enjoy your visit!

Oh, that cardigan looks absolutely gorgeous! I think it will be super in that yarn.

Have a great time with your grandkids and beware the energy loss. I sure can empathize with that one, much as I love my two grandchildren!