Thursdays Are For Knit Group and Survivor!

Knitters make the world a better place, I tell you. If today wasn't Thursday, I would certainly have titled this post - Creative Crafters. Big Hearts.

Look what the knitters were doing today.

Pat is almost finished her teddy. She gives them to the police to give to frightened children in traumatic situations. 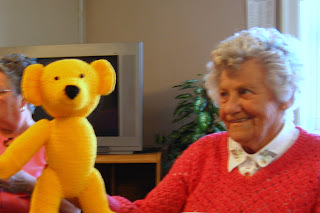 I accused Teddy of revealing his political preferences, being extremely right winged armed.


Nell knits ONLY for a mission in Toronto. ONLY. All her knitting goes to other people. People she doesn't even know. That's a big heart, Nell.
"I had nothing to do one night", said Nell, "and I thought, some little child would like a cuddly teddy." 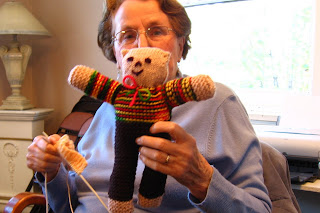 Doreen made all these scarves for her Church bazaar. Last year, when Doreen was recuperating from breast cancer treatments, she knit 36 hats. When the Church called to ask if she had anything to donate to the bazaar, she gave them the 36 hats. This year, she's donating scarves. They're lovely, Doreen. 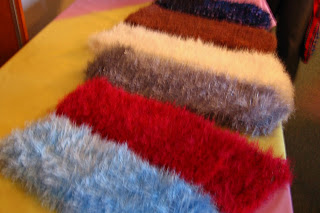 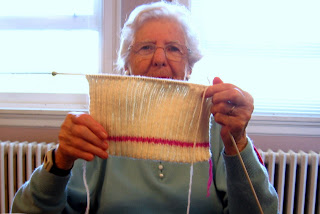 And creative Ingrid describes how she knit the ruffle on her new shrug. Not your average shrug, Ingrid. It's gorgeous. 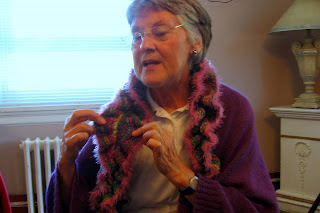 To top it off, we celebrated the upcoming Thanksgiving weekend, with Apple Cider and Maple Cookies. Thursdays Are For Knit Group. Something to be thankful for.
Posted by Brendaknits at 4:33 PM

I'm thankful for your blog Brenda. It's a nice way to keep in touch. Any cookies left?