Having finished my Need A Yoke? sweater, I grabbed a ball of James Brett Chunky Marble and started a cowl. An easy, simple, fast-to-finish knit to fill the gap between major projects.

Last year, my great Christmas give-away was a pile of H20 Hats but this year it will be a stack of cowls.  The pattern for this one was a freebie, given to  me at Shelburne's Wool & Silk  LYS where I purchased the yarn.  It is a very clever design of spiralling ribs. 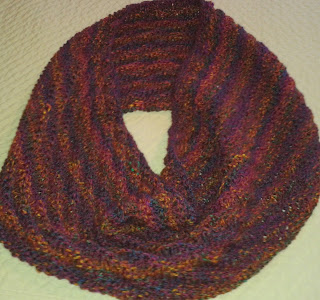 Spiralling ribs I have done before but never as easily as in this cowl.  In the past, when I knit spiralling rib socks, the beginning of the round had to be marked and noted so that the  rib pattern could be offset by one stitch each time a new round was started. That required - at least for me - an excercise of  stop & think  at the start of each round. The clever folks at Estelle, the designers of this knit-in-the-round, spiral ribbed cowl, used a bit of simple math to make the spiral happen automatically.

The 143 stitches, knit on a 6 .5 mm needle - a bit bigger than normal  for this yarn - gave me a cowl than when held against my five foot frame reaches from neck to thigh.  Large enough to wind twice comfortably around the neck. 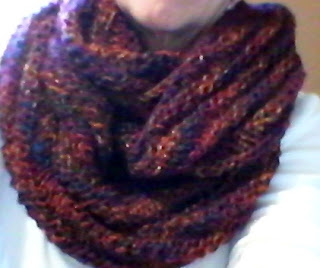 The basket now holds three cowls.  Not full yet, but on its way.  Afterall,  Santa's arrival is still serveral knitting weeks  away.
Posted by Brendaknits at 10:47 AM