Where Where We Wednesday?

Wednesday was a grand day.  We started the morning with a tour of the Painted Dessert.  What a sight!  Vistas of rock formations that appear to have been coloured with crayons or paint by number kits.  Some pinks, some purples, some greens.  The only word to describe the landscape here is breathtaking. 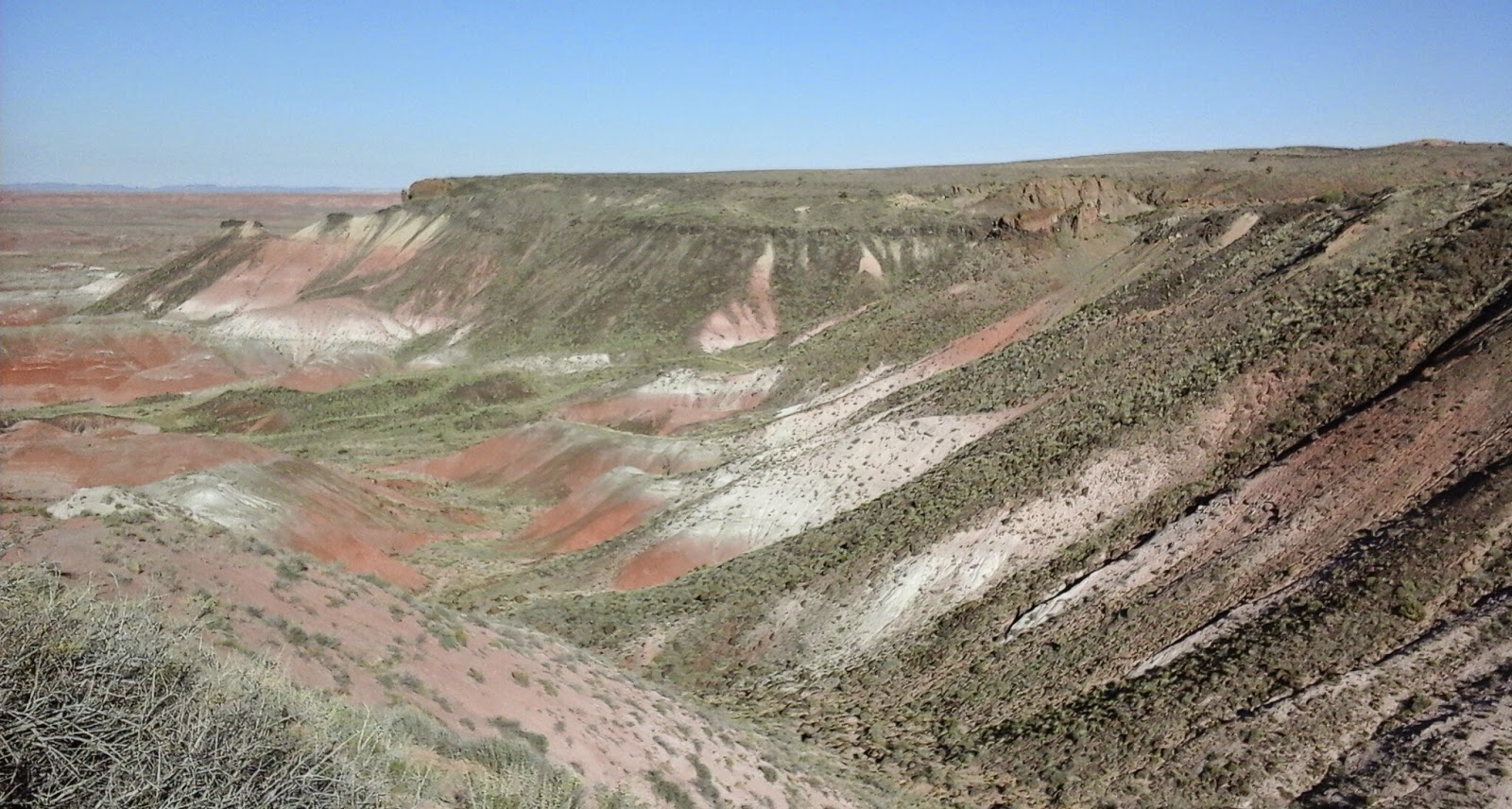 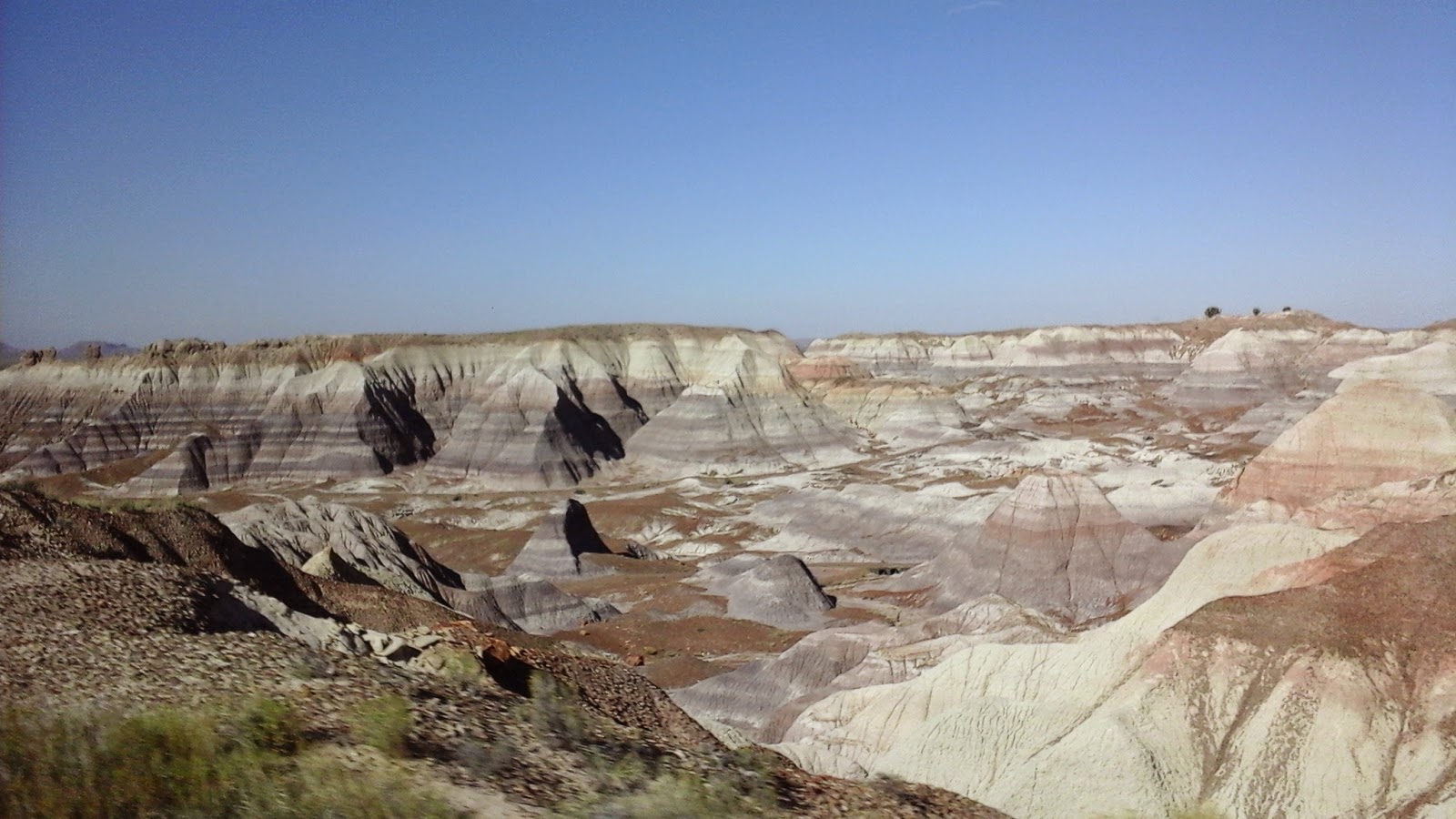 Then we were off to see the Grand Canyon.    We wondered if we would be impressed after several days of being impressed at every turn.      The Grand canyon was by far the most visited, therefore the most tamed??? commercialized?? canyon we saw.  But impressive still.  The cost was so minimal - $25 per car to enter the park.  With four of us in the car - do the math.  Inside the gates are  trolleys which one can ride for free to whatever part of the canyon interests you.  They run every few minutes, so you can get off, explore and  get back on the trolley later.  We stayed until dark, the last trolley run. 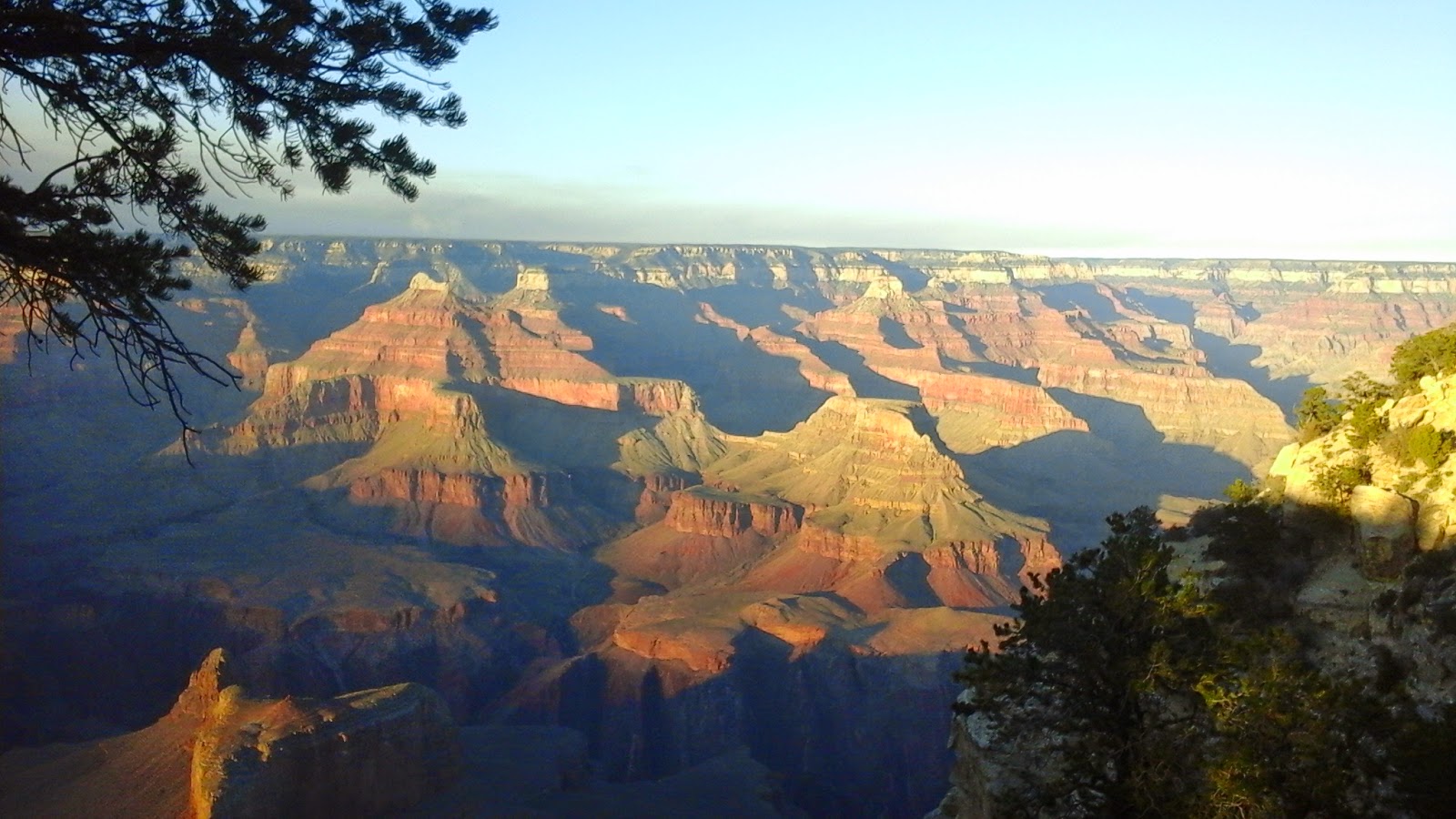 The sun setting on the Grand Canyon.
My pictures of the canyon are the poorest of our trip.  A forest fire had been burning for 4 days and was sending a haze over the canyon

Park management must try to keep the night skies brilliant  as there are no lights in the parking lot at the end of the trolley ride.  We had trouble finding our car then trouble finding the exit.  "Oh, well."  as I said often on the trip. " We're from Canada.  What do we know?"

Sitting next to us on the Canyon trolley was a Santa Claus of a gentleman.  Very large girth, red shirt, white hair and bushy beard.  The next time we saw him, he had climbed the railing at the edge of the trail to sit on a rock ledge, legs dangling over the canyon, watching the sunset.  His wife, we noticed, was  sitting several feet back on the safe side of the railing.  Guess Santa hadn't read the brochure that said almost 2 people per month die in the Grand Canyon.  Among the causes cited were  dehydration and  heat exhaustion.  They forgot stupidity.  The picture below is where we later saw him sitting, legs over the edge, of  that big rock beyond the railing. 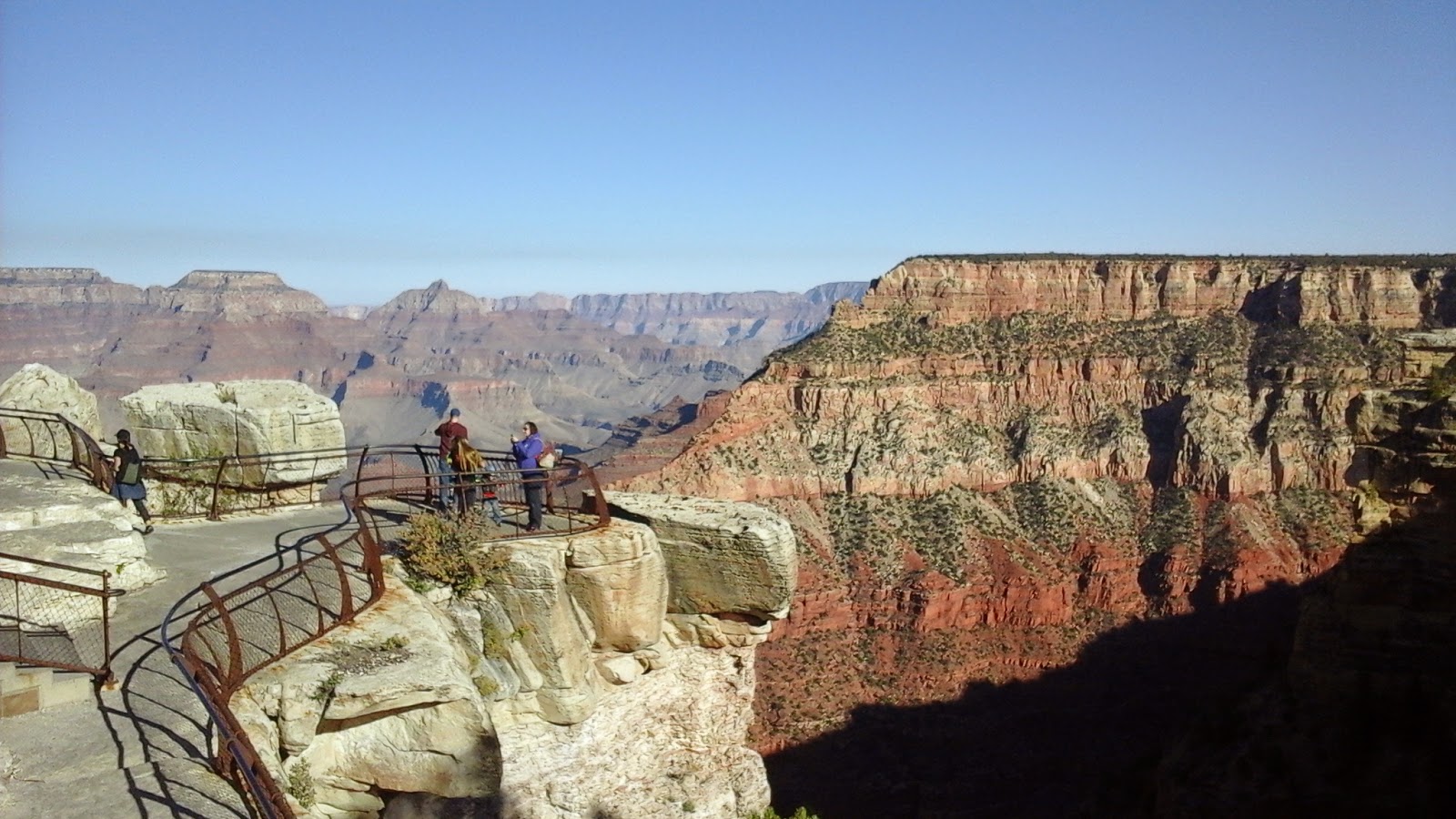 Hiking trails in the lower part of the Grand Canyon valley.  That's a long way down! 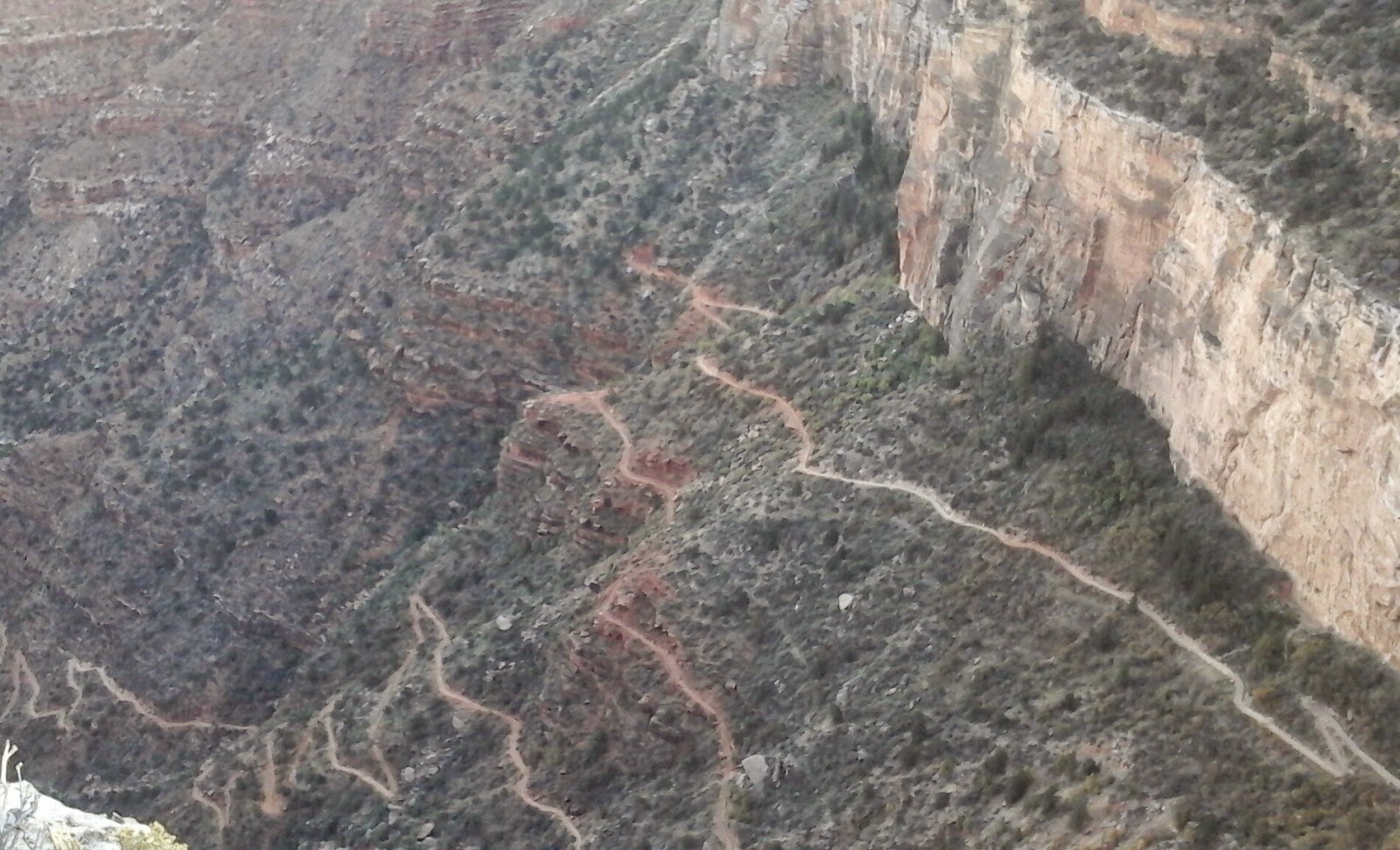 And how is my niece's cardi coming along?  Well, it backtracked a bit.  About to make the third buttonhole, I took a serious look at the buttonhole spacing.  I realized I had put mine so close together that by the bottom hem I would have 20 buttons.  Nah!  Ripped it was and I am back to where I left off. 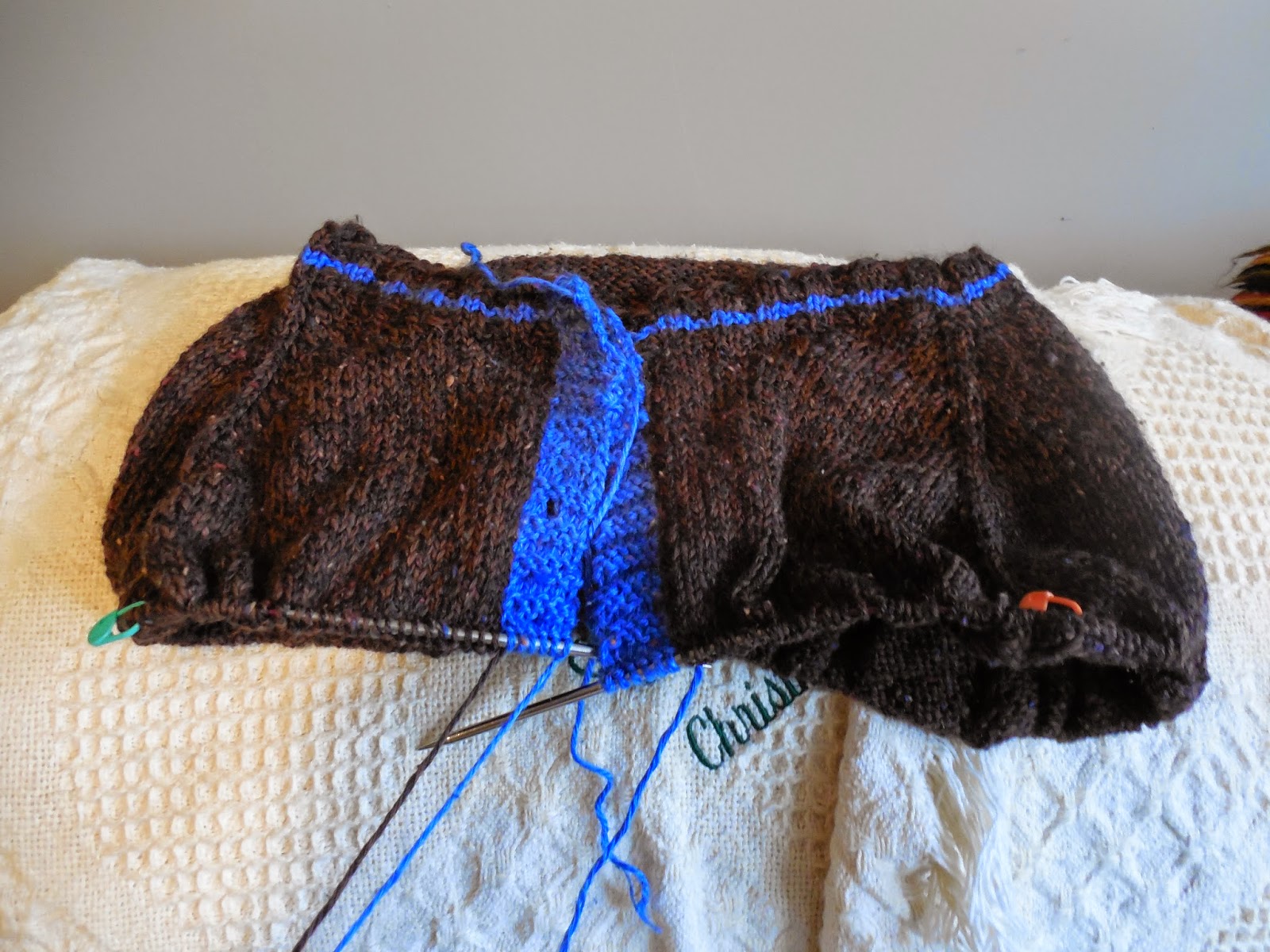 Come with us next time Brenda, and we'll take you waaaay down there. The world looks different from down there!