Sorry about a Friday post regarding Thursday's knitting but a girl's gotta have fun.  Right after knit group yesterday we knitters took off for Owen Sound, some great Chinese food and Riversides Yarn's previously-postponed-due-to-weather, post-Olympic party.  All of which meant by the time I got home and relayed the day's events to Fred it was too late to post.  Too late for me to post, that is.

So day-old, but-just-as-jaw-dropping, knitting news is what I present today.

Deanna is wearing her lovely, lovely scarf.  Knit with Sweaterkits Mulberry Silk, it is the perfect colour to brighten an end-of-winter day.  As well as your eyes, Deanna.  Gorgeous. 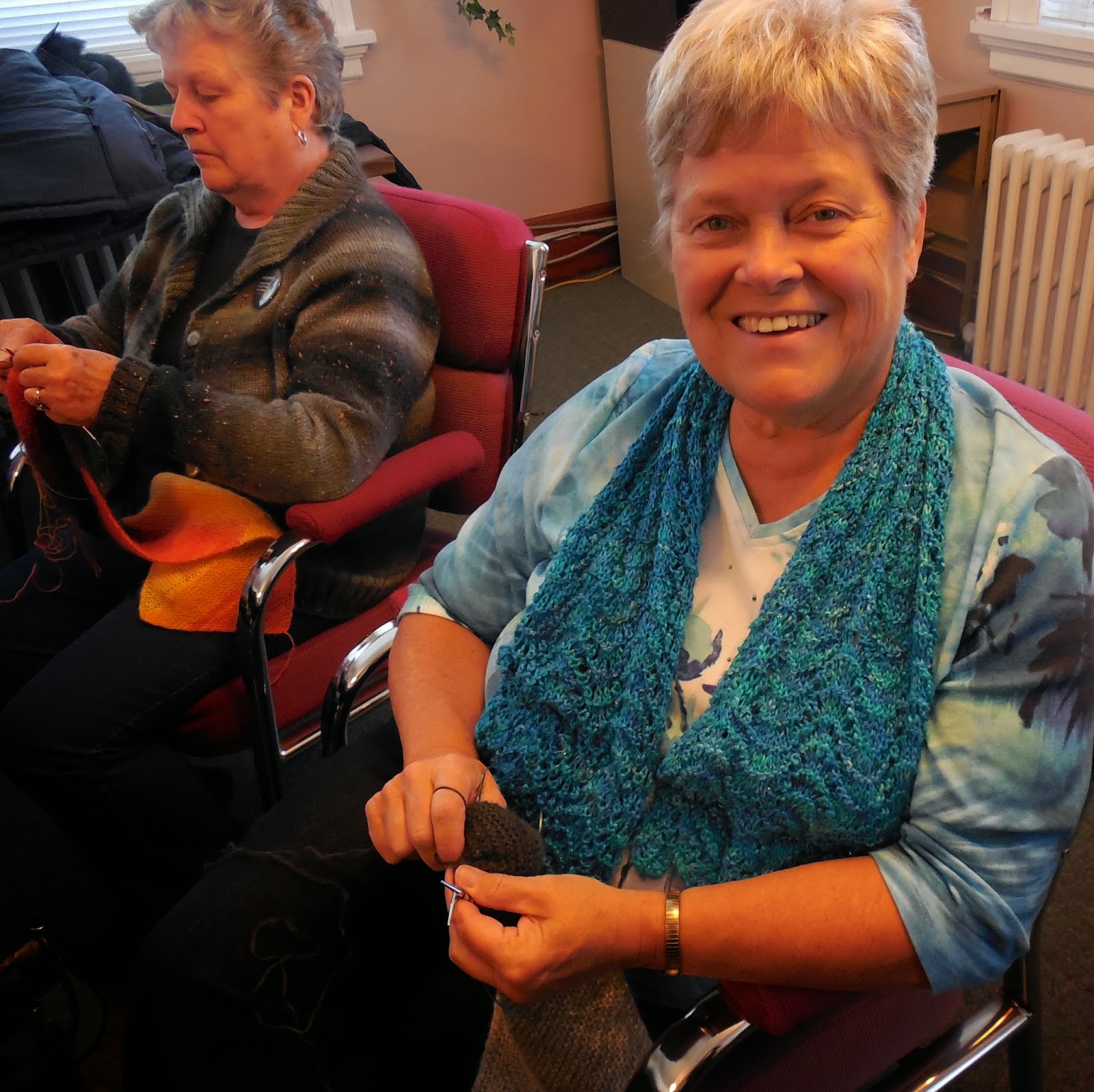 Gail has a scarf on the go.  A Diagonal Scarf,  she is knitting with a ball of Patons Lace  she scored on one of Sandy B's sister Sue's (bag lady Sue)  great give-aways. 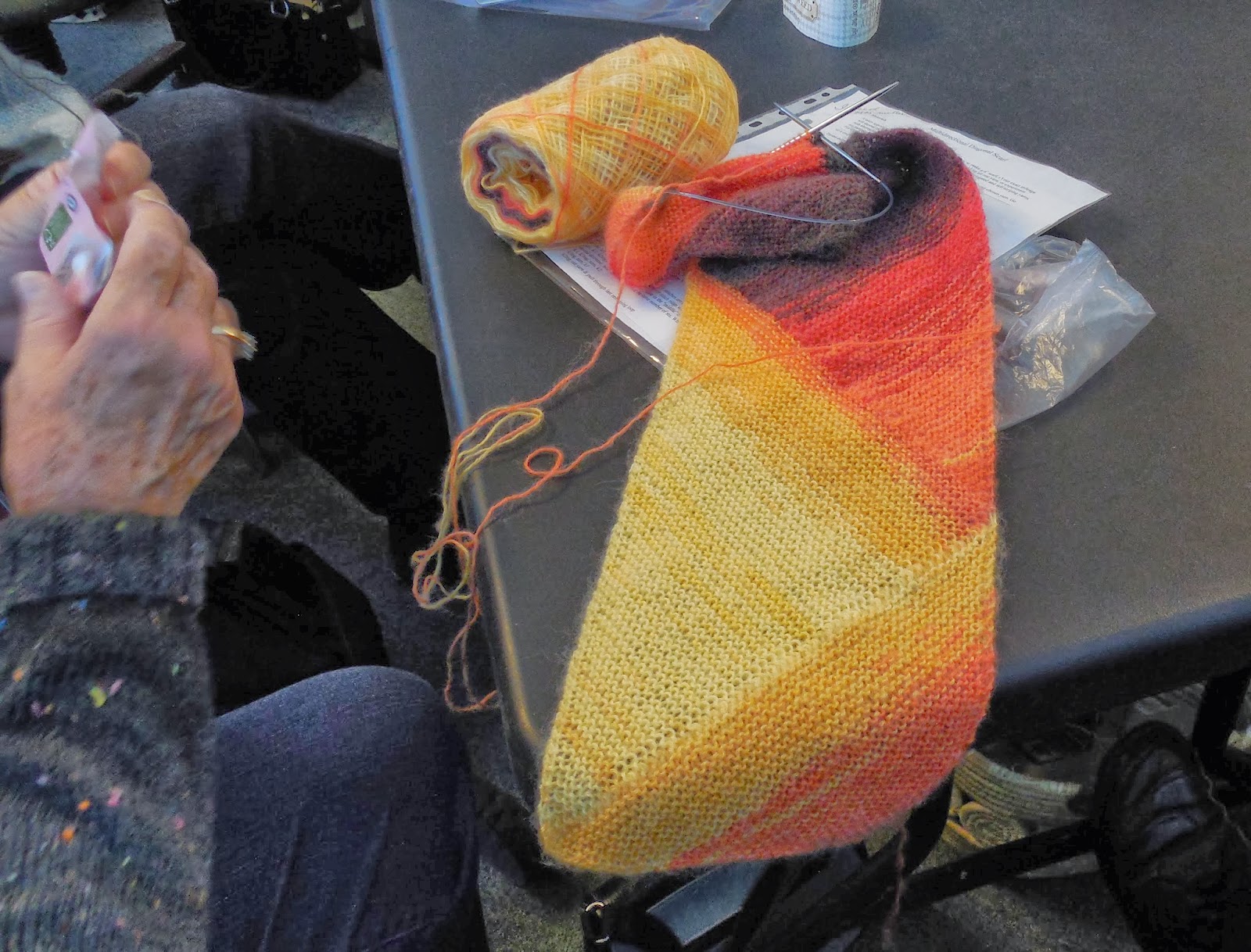 Another bright colour to offset winter, but the perfect part of this knit is the way the colours are transitioning almost precisely on the directional change.

Wilma and Sharon, our two injured/sick Olympic knitters are back to full knitting steam.  Sharon working on a pair of cabled socks - a first for her -  and Wilma working on her intended Olympic project, The Sarah from Button Up Your Top Down. More knitting in Wilma's favourite colour! 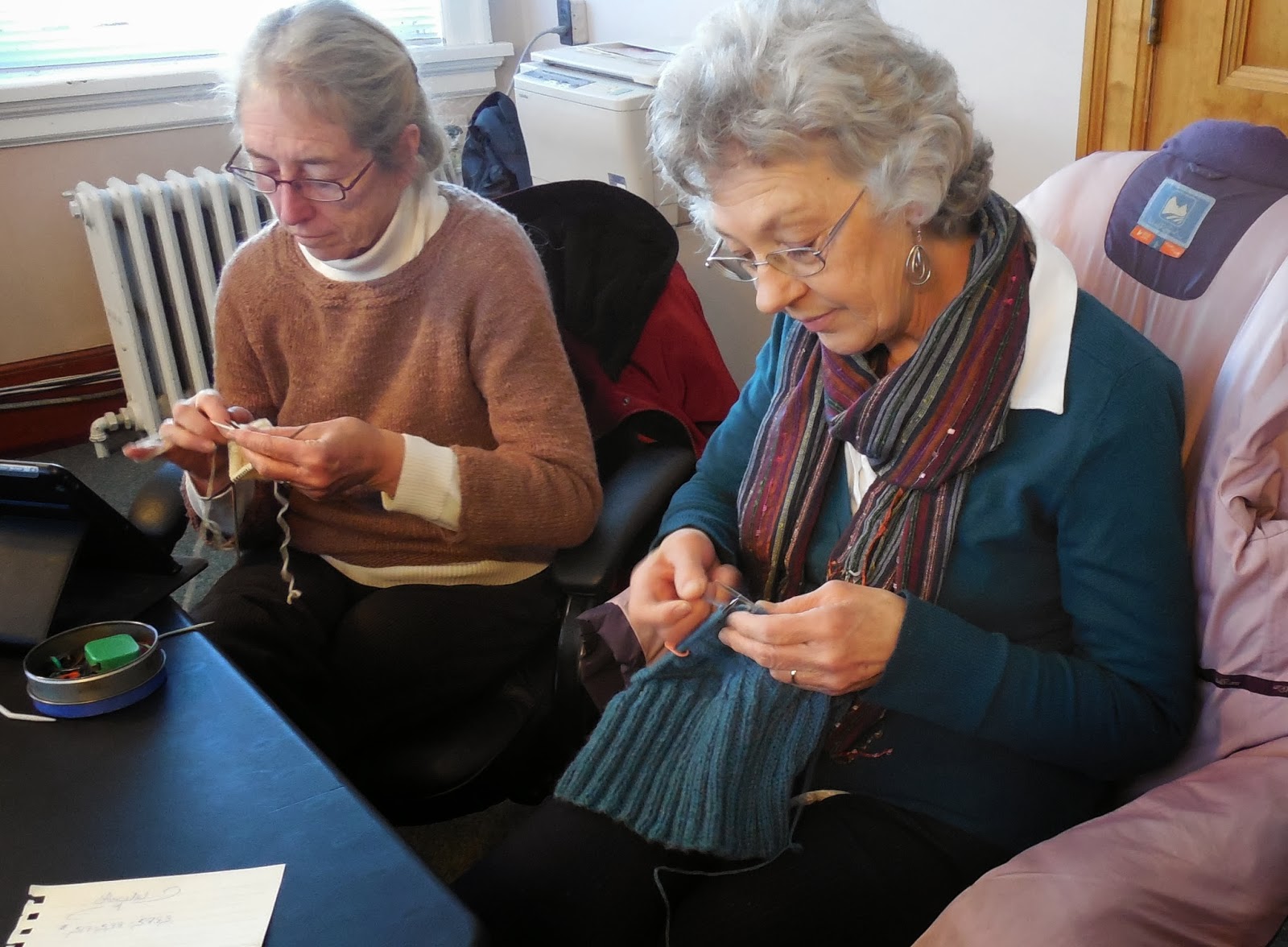 Now what is Miss Jean doing? 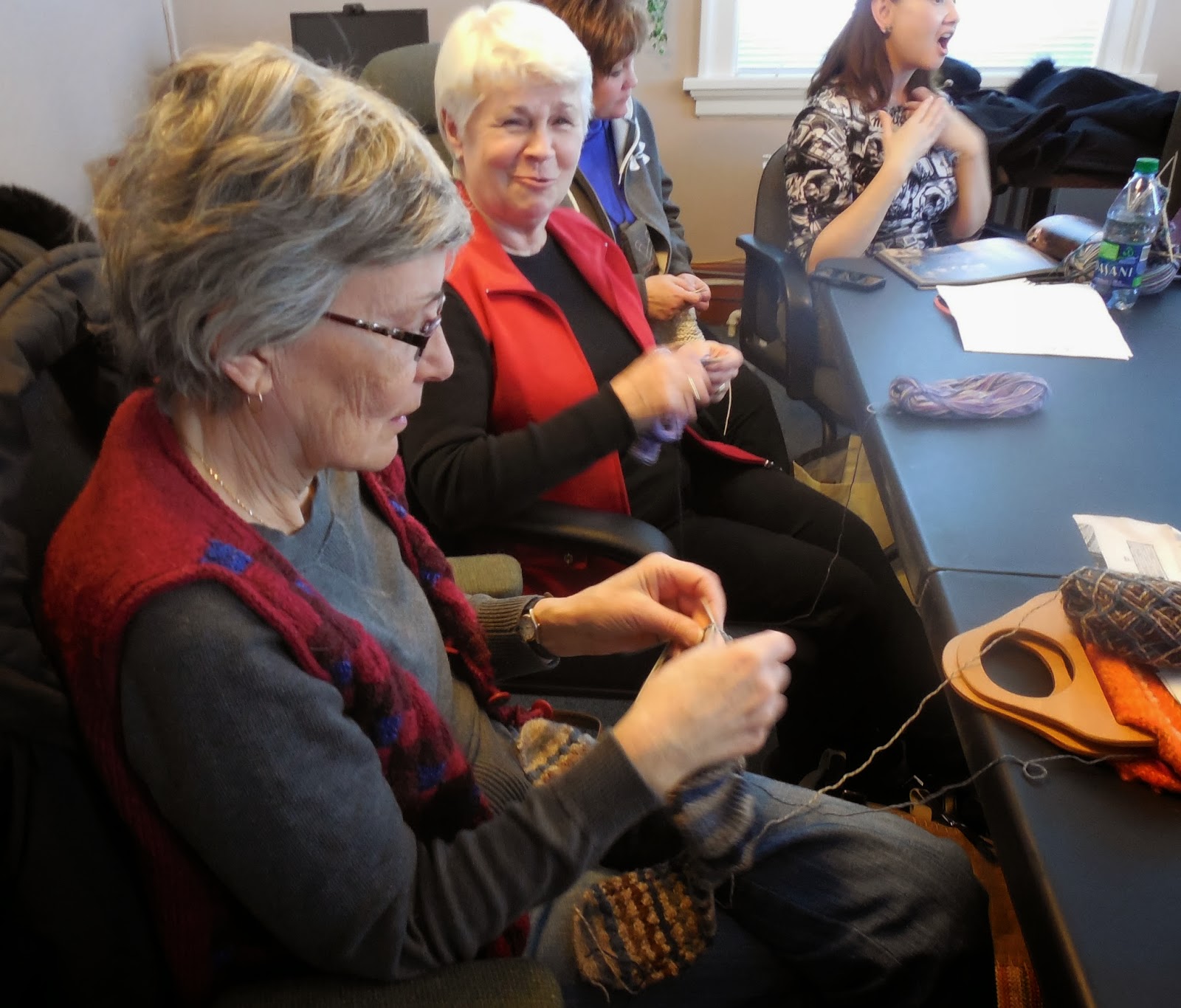 Seems to be socks.  Seems to be circs.  What!!! Seems to be two socks at once. Toe up, 2 socks on 2 circs.  Imagine!  A great psychological advantage over the one-at-a-time sock knitting which leads to second sock syndrome, claims Jean. 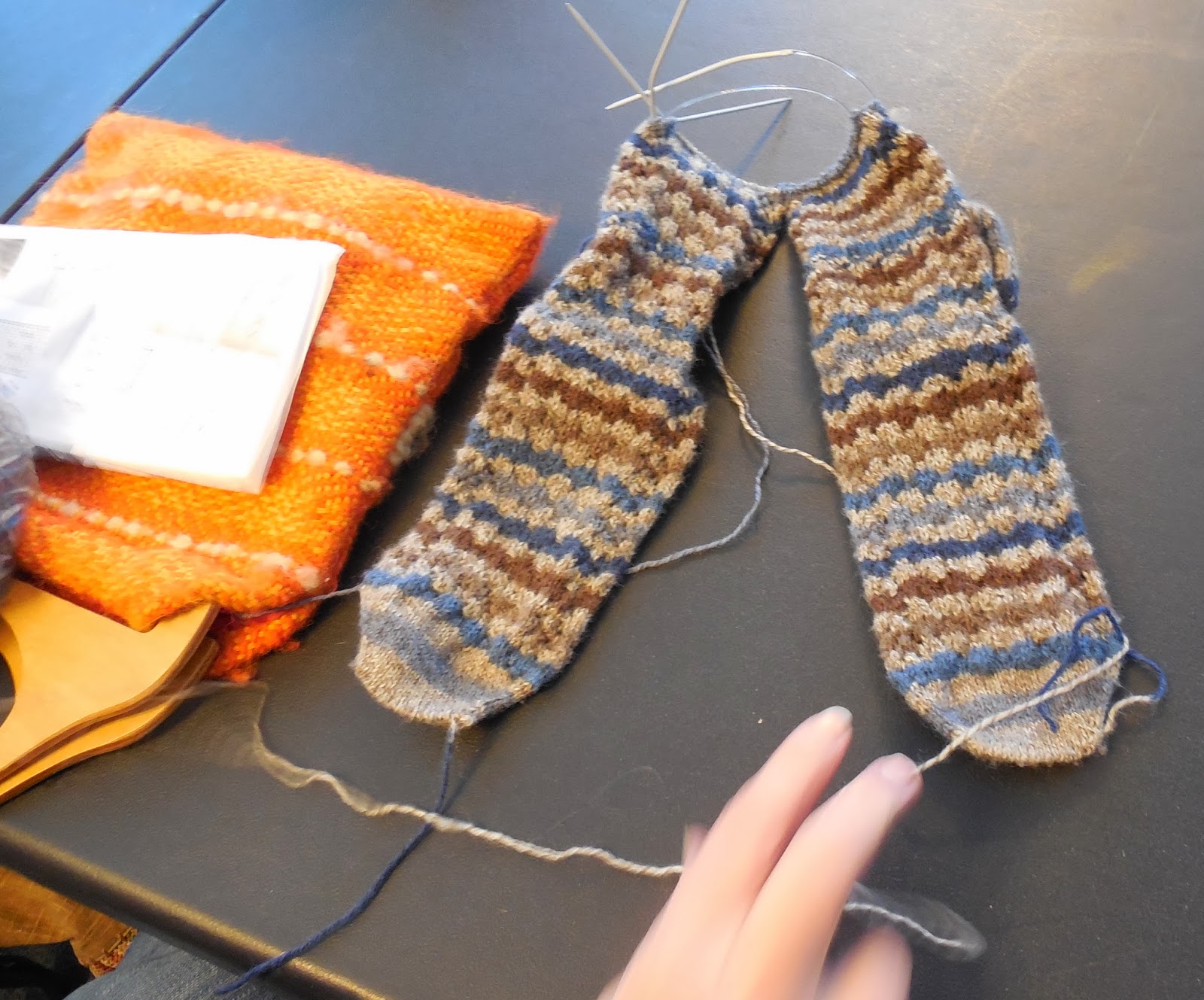 Doreen is working on a pair of the war-time socks for the gallery display in Owen Sound. 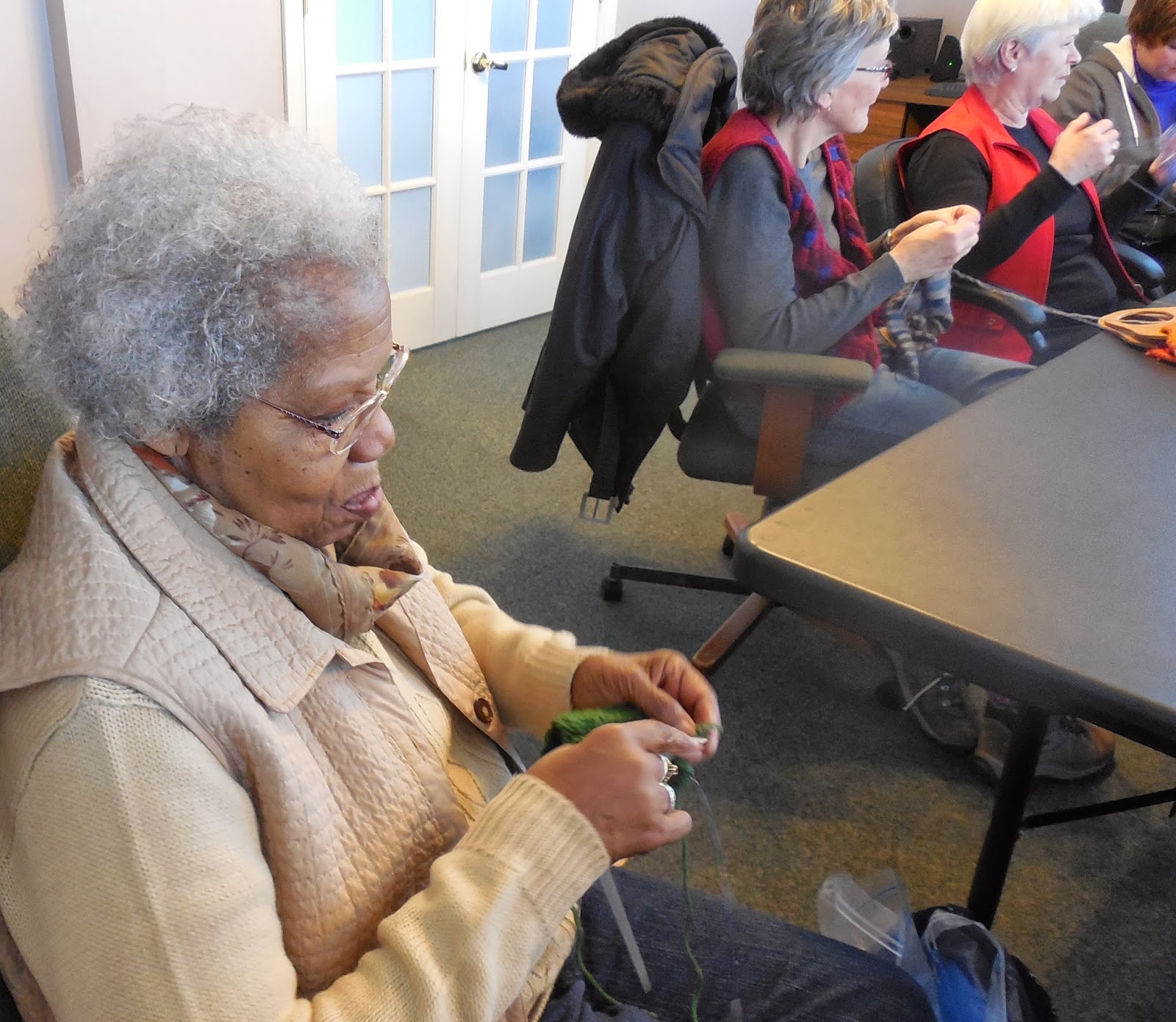 With one finished  - according to pattern she wants you to know - she thought it the most bizarre shaped sock.  I suggested she give it to the enemy! 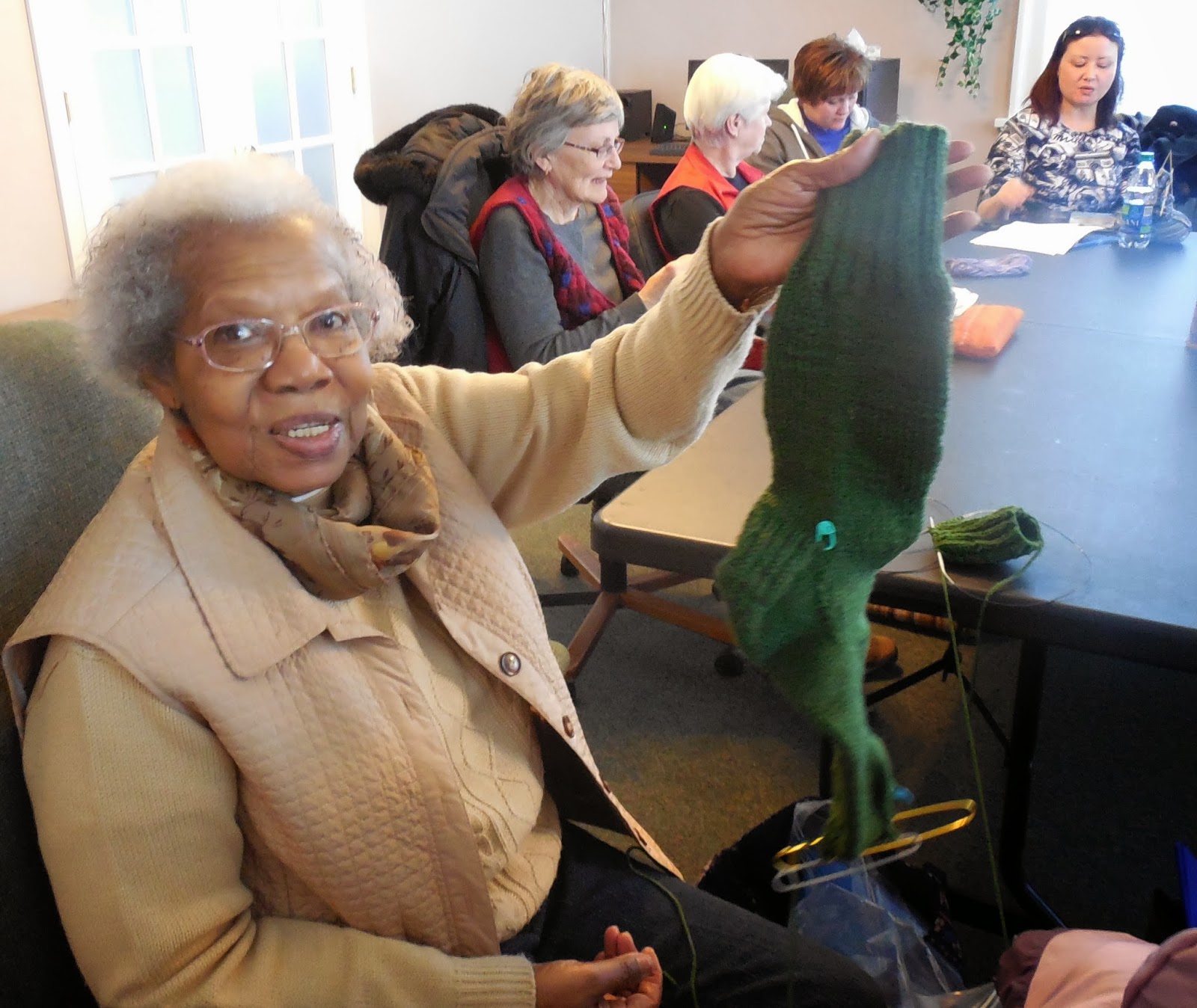 Michelle, new to knit group and new to knitting shows off her dishcloth.  Well - it was intended to be a dishcloth but - things went awry.  Or went down designer lane, because she ended up with a hat.  A darn nice hat, I might add. 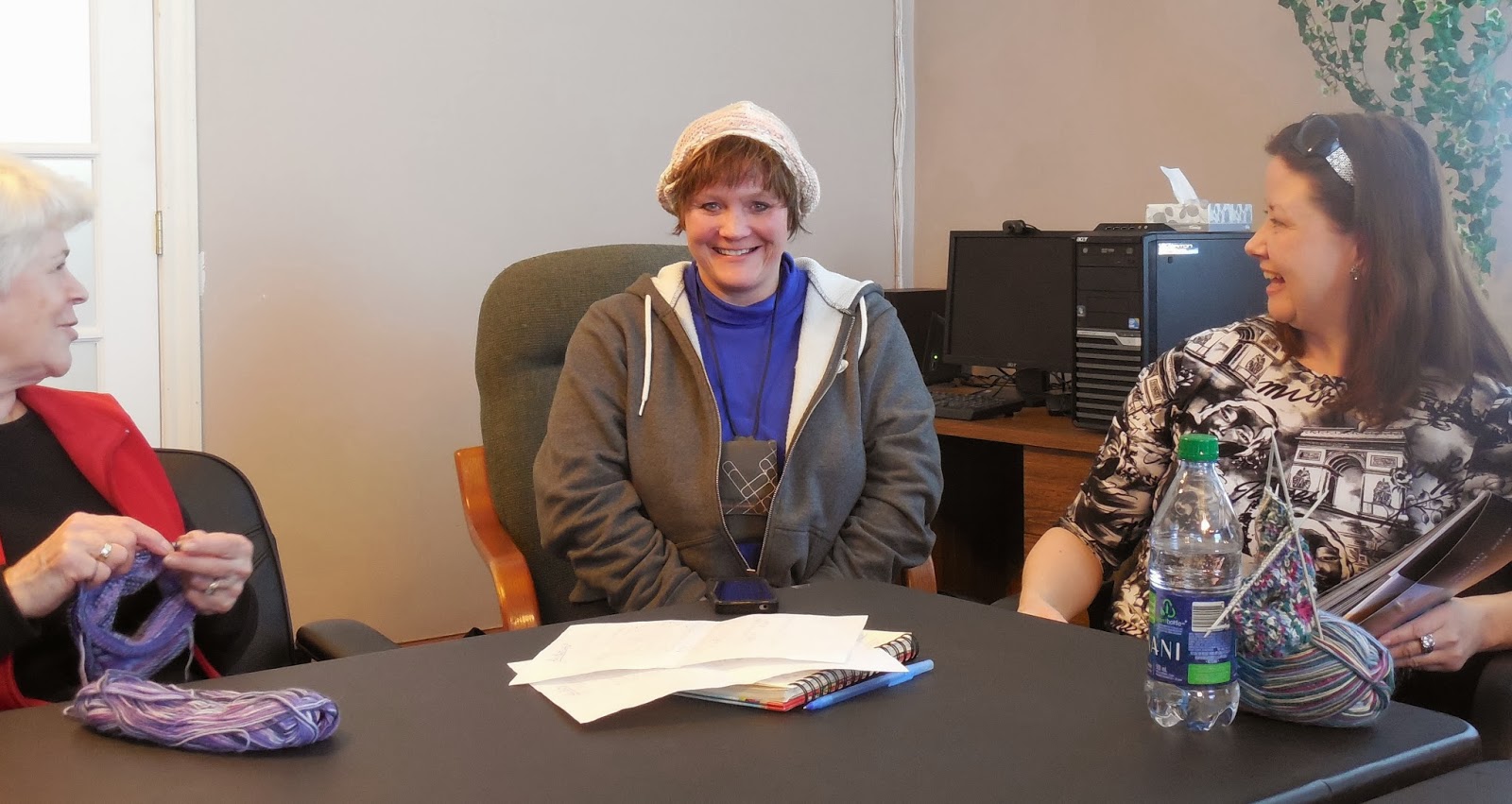 She is now working on project number 2 and when asked what she was knitting replied  "I have no idea."  I predict big things from Michelle.

Another fun day with lots of laughs.  It has been said that we sure do liven up the library.

I wish I could join you!!! You all seem to be enjoying all around!
teresa_a

Oh wow. Give everybody a big hug for me. So many nice things!