Summer 2013.  There was knitting.  Not much, which I cannot understand.  With the cool wet weather we had one would think I had more time for knitting.  But it doesn't seem so.  Maybe it was the hours I spent playing Abi's latest card game - Speed.  It involves the lightning speed of slapping your cards down on the table to great guffaws of laughter. She won most often as her hands move faster than mine.

Anyway - the knitting.  First up, I finished the little sweater for the baby that is going to make me a great aunt. 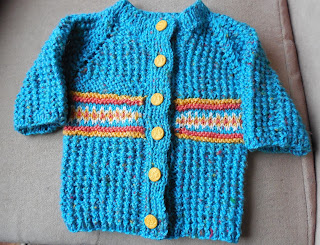 The pattern is  Ring Master  from  Cabin Fever and  I knit it primarily with Cabin Fever
Cotton Tweed.   The yarn in the fair isle section is stash stuff.  This sweater has been delivered and declared 'so cute'.

Then I knit a shawl. 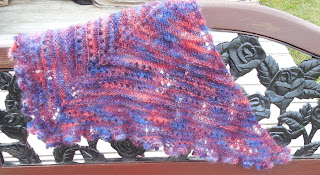 Called Judy's Ruffled Shawlette, it is another Cabin Fever pattern.  This one knit with Wellington Fibres Mohair.  I was a bit shy of yarn for  a complete pattern.  No rules on shawl depth though so it looks fine.  I gave it to my trailer neighbour who is my early morning walking partner.  With a big grin, she wrapped it around her shoulders immediately so it appeared to be a hit. 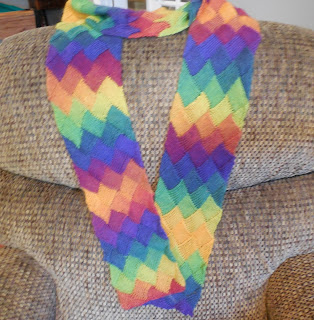 When I spotted the Sock It To Me yarn with it's long colour stretches at Hearst's finest yarn store - Ruby's Tool/Wool Napa Auto Parts Store - I knew immediately it would be perfect for an Entrelac project.  And it is. The scarf used just one 100 g ball.  Can't beat the price at  $9.99 a ball.

Then there was a rainy day drive to Hearst's neighbouring town, Kapuskasing .  There I discovered a yarn and quilting store.   Imagine:)   I left the quilting side to the other customers and headed for the yarn. I picked up one  100 G ball of Patons Lace with sequins.  At some point in time I had scribbled down an idea for a scarf with a ruffle on each long side.  Cast on 800 sts.  Knit 12 rows.  Decrease to 400 sts.  Knit 12 rows.  Decrease to 200 sts. Knit 12 rows and repeat in reverse.  But I was not at all sure my one ball would go that far.  Instead, I put only 4 rows between decreases.  Once I got down to 200 sts, I simply knit every row until I ran out of yarn.  I have a scarf with a ruffle on one side. 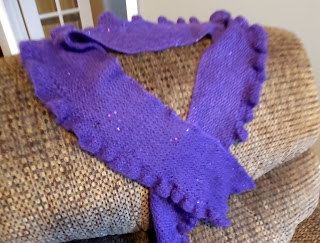 It's asymmetrical-ness only appeals to some - but I like it.

And that is it!  All the knitting I accomplished in the summer of 2013.  Shocking.

Posted by Brendaknits at 8:27 AM

I just bought a ball of the Sock it to me yarn. What a great scarf!

I love all the projects you made!