Colour Block is growing rapidly.  Seen here from a Friday shot, it is now even longer. 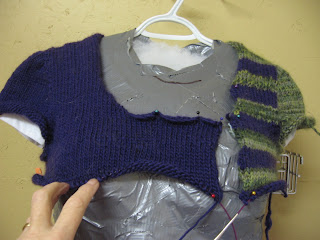 Since there is so much to talk about with the construction of this sweater, I thought it better to dole out  information in small doses.

As my Colour Block vision materialized, I knew I wanted set-in sleeves.  And I wanted to knit CB in a top-down fashion.  Suzie M has created a newer style of top-down knitting with simultaneous set-in sleeve which she calls The Contiguous Method.  It starts at the centre-back neck then works back and forth making increases until the knitting reaches  shoulder width.  At that point, on either side of a few stitches set aside at the shoulder 'seam',  increases are made in the sleeve portion of the knitting to create enough fullness to cover the upper arm.  Ingenious!  But--

The one thing that concerns me about Contiguous is the lack of a shoulder seam. After all, the entire weight of the sweater hangs from the shoulder.  Doesn't it stand to reason that it is a good idea to have a seam there?  To support that weight?

Some knitters, I know,  would argue that there is no 'shoulder' seam in a raglan.  Sure,  the pieced raglan has sleeve seams that probably give some support to the upper portion of the sweater, but the top-down raglan has no seams.  At all.  Does that bother me? No.  Why is that?  I have no idea.  But the idea of a set-in sleeve without a seam bothers me.

Ann Budd, in her Handy book Of Top Down Sweaters  has top-down, set-in sleeve designs.  Instead of  simultaneous, set-in sleeves, though, her designs get the armhole ready for a finishing application of a short-rowed, set-in sleeve to be added after the body is  complete.  It works.  But it wasn't what I wanted to knit.

But - Ann's system does create somewhat of a shoulder seam.  The entire back stitches are cast on and short-rowed across each side to  shoulder  width.  Next the fronts are begun by picking up their stitches from the cast-on stitches of the back.  Although not quite a seam, there is, I feel, some support given by that pick up.  The fronts are then short-rowed just like the back until they reach  shoulder width.

What I decided to do was a combination of both systems. Call it the Suz-Ann method.   I cast on and followed Ann's instructions until I reached shoulder width, then switched to Suzie's method of  simultaneous, sleeve-cap construction.  It worked.  Really well, I think. There is just  a slight puffiness on the purple side, that I should be able to block out.   But...

There is always room for improvement.  Next time, I would start both back and fronts with a provisional cast on, work  short rows to reach shoulder width,  join the fronts to the back with a Three Needle Bind Off then carry on a-la Suzie.    That should be the perfect start to the perfect simultaneous, set-in sleeve.

My head is spinning at this prospect. Don't know whether its post "holiday" weekend mental fog or just that I don't mind sewing in sleeves enough to really engage with this idea. I'll have to re-read it later!

I am able to understand you've put the two systems together though and that I can readily recognize as ingenious! I especially love the Suz-Ann name!

Can't wait to see this progress!

one other option - if you are looking for a stabilized shoulder seam that won't droop.
Simply make the sweater using Suzie's Contiguous method (which I love!). Then, once the shoulder "seam" is complete - you cold crochet a line along the seam on the underside. This will give it stability and prevent any stretch. You could use the same yarn, or possibly even a thin cotton or other non-stretchy fibre.
Just a thought.

The answer to will it support is yes. I have washed my Undercurrent twice now, and though the increases are very open (my bad increase method) and worried me greatly before wearing, there is absolutely no problem supporting the fabric. And if I may say, there is a whole lot of sweater weight below it, much more than average, think large mans sweater by weight. I am completely sold on this method, though I know it won't ever be the only thing I use. Wouldn't it be sad to only knit one way? How dull.