With Thanksgiving, Sis' socks and a house full of people now behind me, I fully expected to be able to finish my 50th Anniversary cardigan 'toute suite' as we say here in bilingual land. Tuesday night I expected completion.

Tuesdays are my night to howl knit as Fred plays darts on Tuesday nights. He leaves at 6:45 which gives me tons of uninterrupted knitting time. Finished pictures Wednesday morning, I so foolishly thought. After all, it is down to two little bands of I-Cord. How hard can it be? Well, hard enough that third time wasn't so charming.

Now, you might remember that I did I-Cord trim on my Elizabeth Zimmermann Green Sweater during the 2010 Olympics. So it's not that I don't know 'how' to do it, it is just that I can't remember how to do it well.

The second attempt went poorly, but in true knitterly-denial fashion, I kept going until about half way around the neck. By that time - quick learner, me - I knew I had a poor I-Cord on my hands. Rip.

Third time - close to bed time - and I am about half-way up the front of the sweater. One might talk about the charm at this point, but I'm not thrilled with the results. You be the judge. Which picture is a picture of I-Cord? Without the needles in the photo, it's hard to tell. Which to my knitterly mind means - not worth the effort. 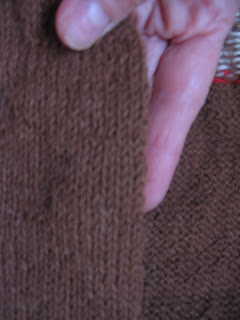 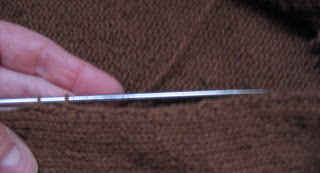 My options are to trim in something other than I-Cord, or carry on until the second layer is complete, then decide. Wanting to stay true to the original pattern, I have decided in the bright light of morning, to carry on. It will either work or it won't. The next few days will tell. I'll keep you posted.
Posted by Brendaknits at 8:13 AM

Well, let's hope it will work this time. I've done the I-cord edge before but I'm confused by your last picture.

I think it's worth the effort if the i-cord will keep the edge from curling and give you a firm finish.

There are tweaks and tips on doing a smooth i-cord without blips. I can't recall where I read them, but they are out there!

I'm with LaurieM. If it gives you a good finished edging, then you have it right.

Sometimes yarn and sweaters don't fight fair. You have to take the victories where you can.