Last week, I was introduced to Carol - a lively, 80 year old Grandma. When Carol came to see me, she was very excited about the recent news that her Grand daughter is expecting her first baby - Carol's first great grand child - in March.

With her, Carol had a plastic bag filled with her Mother's knitting things. Yarn, needles and the un-joined pieces of a small, white, hand-knit, baby outfit.

Since her Mom passed away in 1995 and for several years before that was too unwell to knit, Carol struggles to imagine when -and for which baby- her Mother might have knit the little outfit. But, with the next generation on the way, Carol really wants to see the baby wear her Mother's handiwork. "After all', she emphatically told me, in case my genealogical math was poor, "that would be the baby's Great Great Grandma!"

Carol asked if I might be able to sew the pieces together, knit a picot edge around the neck and affix some type of closure. "'Not ribbons - my Grand daughter hates ribbons".

Once my 50th Anniversary Sweater was finished, I gathered up the little pieces and spent a lovely couple of evenings sewing them together, thinking of babies and the wonder of knitting that crosses generations to bring love from a Great Great Grandma known to the baby only through stories.

There are, as requested, no ribbons, but rather three little pearl buttons for closure and a picot edge around the neck. The bonnet, - since I am now so good at it - has an I-Cord tie. 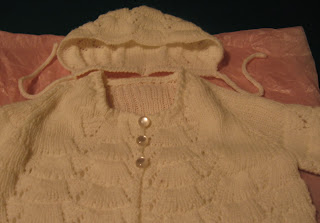 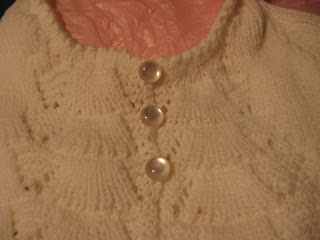 May the baby wear it in good health, Carol.
Posted by Brendaknits at 7:47 AM

Just beautiful, and how wonderful of you to help out. Sigh...makes me wish we were having a granddaughter...all this knitting of dark blue, gray, and red things (nursery colors) is getting a little tiresome...I'd love to do lacy pink. :-)

I like the pattern of that little jacket. Nice of you to help out.

Its quite satisfying work to assemble another knitter's work isn't it! How lovely to have G.G. Grandma's handiwork adorn a wee G.G. child!

what a great family memento - nice of you to help out.

What a great story. I love the sweater it is to cute.

What a wonderful story. The sweater is beautiful and will be even more gorgeous with a baby wearing it.

What a lovely thing for you to do.

That's emotional, and spans two people that aren't "here". What a lovely story that babe will have. There must be a heavenly knitter saying,"thank-you for finishing that, I thought it wouldn't ever get finished!"