When Stephanie knit this hat, she called it "Unoriginal Hat". Stephanie examined, then 'duplicated' her daughter's friend's 'cool' store-bought hat. Since I am 'duplicating' Stephanie's version, I am calling mine "Twice Unoriginal"Hat".
Stephanie's version is lovely, looks lusciously soft and she said was fun and fast to knit. My version?? well...
In my trailer-trunk, I had no yarn of the right gauge, so I used this. 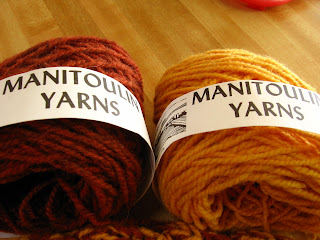 Holding two strands together got me 'close-to' gauge. A bit thicker than required but close.

Stephanie suggested 7 mm needles. In my trailer-trunk - you guessed it. No 7s. 6 1/2 was the closest I could come. Yarn? a bit thicker than called for. Needles? a bit smaller than called for. Knitting? That combo is not so fun. The hat? a bit stiff and hard. 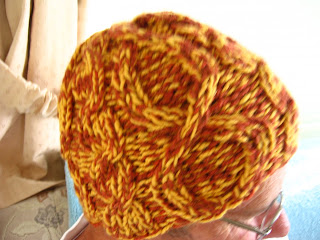 Three people have tried it on and all three have grimaced. Not the best reaction. Great pattern thought, Steph. I'll try it again when I get some Blue Moon Leticia.
Posted by Brendaknits at 1:17 PM