First knit group meet-up of 2016.  Well, first, official knit group meet-up.  A few of us gathered at the LYS last  week for some knitting.  But back at the library, back into routine?  Today was the first of 2016.

And it was special.  Marilyn, who calls herself a lazy knitter, realized that her favourite cast on for toe-up socks would also work for  Izzy Dolls, eliminating the need to sew up the bottom.  Marilyn's dolls will never have rough bottoms like a couple of mine.  Marilyn offered to teach us how to do Judy's Magic Cast On and like a new-age teacher, she broke us into small groups to do the teaching. 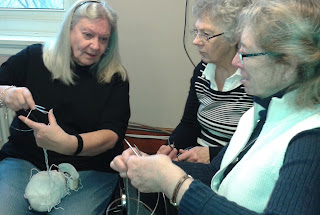 Wilma and Sharon mastered  this new skill much more quickly than I did, for sure. I need practise otherwise my bottoms will still be rough.


Wilma,  spent several knitting nights searching both  the Internet and ravelry for the perfect pullover pattern. Over the holidays, she finally found what she wanted.   Martie  from JoJo Knits is top down with a bit of cable. And it looks as if it is a speedy knit.  Just look what she got done between holiday activities. 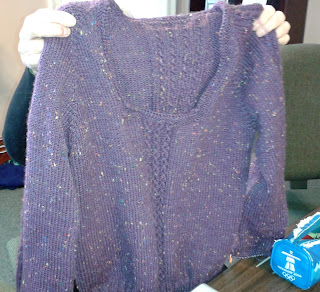 Ingrid arrived today  in a 'years old' piece.  I loved it.  Shorter length than  most she wears and with a beaded bottom. 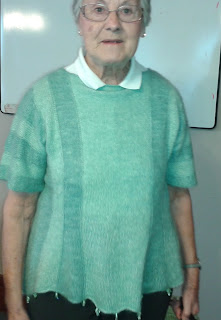 She has a similarly shaped piece on the go at the moment.  This one, though, is knit in Ingrid's more customary and I'd say, favourite, construction method - strips. 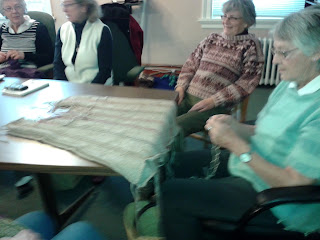 After knitting, the strips are crocheted together and while my photo doesn't show it clearly, each line of crochet is done in a different, but similarly toned colour.

The library  received a donation of knitting magazines and left them on the table for us to peruse and take home if we wanted.  Bonnie was deep into them. 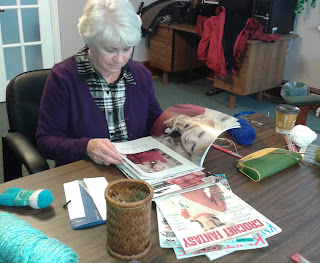 Back to routine.  Knit Group on Thursday afternoons.  But for me, my last meet-up for awhile. Fred and I have decided, this winter,  to try something different.  We are going south for a few months.  By next Thursday we'll be on the road.  There will be knitting for me, both in the car and in Florida.  But, I'll miss my Thursday afternoons.
Posted by Brendaknits at 7:43 PM

Labels: Thursdays Are For Knit Group 2016

Enjoy your trip! 'Have to say I'll miss the Thursday updates from Meaford!