Wow.  This   'year of the small'   is certainly motivating with its several-per-week FOs.

Sticking  with the same era as the Downtown Hat   I knit a 1920 Stripes. 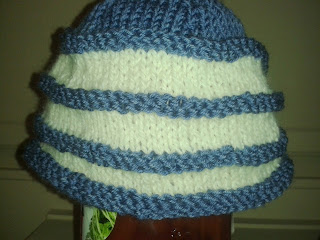 A fairly new, Cabin Fever pattern, that  was such fun to knit.  Knit with chunky yarn on size 6mm needles, it flew by.  For me, fast almost always  equals  fun.

I used stash yarn for the entire hat.  The white for the stripes was leftover from my Moose Eh? sweater.  (You never saw that sweater as I ruined it so completely by thinking  I could design it better than the designer that I tossed it upon completion.) The yarn was a lovely, soft, chunky weight and its leftovers look great in this hat.  For the main colour, I used a doubled strand of Shelridge Yarns DK in blue.

With most Cabin Fever  designs, at first glance, a knitter might think - 'Oh yea.  Another sweater/hat/mitten pattern.'  Often though, there is  a technique or two of technical genius that makes the design a teaching tool within a pattern.  1920s Stripes is no exception.  Basically a toque it seems.  There are  some reverse stockinet ribs and short rows that create a longer-in-front-than-back style. 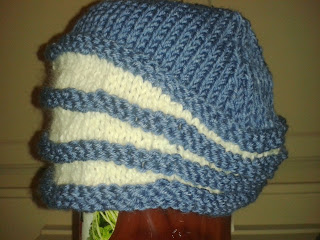 Reverse stockinet?? Short rows?? Been there done that, one might say.

BUT - the short rows are done with CF's latest, easy-peasy method - the Twinned Stitch Short Row.  Such an improvement  - easier to do and better results - than the wrap&turn type.Then there is the crown of this hat.  Four decrease points, two at the centre front and two at the centre back. When the stitches are decreased by 50% the opening is closed with a three needle bind off.  It looks like this. 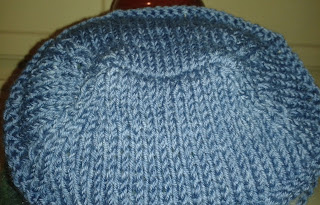 How cool is that?

Again, I say, Wow!   A big WOW! for the pattern - thanks, Deb.  And a lesser Wow! for my already growning list of FOs.  As of January 8, I have three pieces, all started and finished in the new year.  At this rate, I should see the end of my stash in 2016. Not many knitters can say that.

Oooo are you aiming to end your stash? I've always been essentially stashless and its such a great way to approach knitting (and housekeeping!) I can't believe more knitters don't do it.

I love this one! It is very nice winter hat. I think that combination of white and blue colors is great.