My final,  planned sweater for 2015 is my second Glenora.  This Glenora will be for my niece.  The same niece that asked for a sweater last year and at that time, I knit her a top down brown and blue raglan knit in  Cotton Tweed.

This year she only mentioned that she would like a second sweater as I was about to walk out the door for home after our Thanksgiving dinner.  That meant little time to search ravelry for pattern ideas.  I was wearing my Glenora and asked "Well, do you like this one?"

"Oh yea," she said "and especially the buttons."

So Glenora number two it was to be.  In a maroon colour she said.  Finding Cascade Eco in maroon was a challenge and in the end had to be ordered.  That took two weeks.  Then I had to finish Snowflake which took another week, delaying the start of  Glenora #2 until November 30. 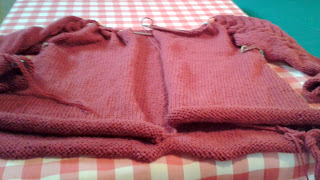 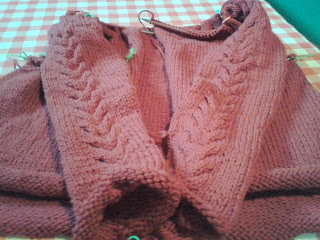 Mind you, that still was no  cause  for concern,  as my first Glenora took only  10 days to knit.    Number two however has been on the needles two weeks today and still isn't finished.


Now the deadline looms, as my family Christmas is this coming Saturday.  Five days to finish.   Wish I could knit with crossed fingers.