Summer is here.  Knitters are travelling or planning to travel. But that doesn't stop the knitting.

Ingrid was at knit group to day.  She has been otherwise occupied these last few weeks so it was great to see her today. She was working on another interesting piece, but I was more intrigued by what she was wearing. Here she shows me how the only shaping is done with the two side strips. 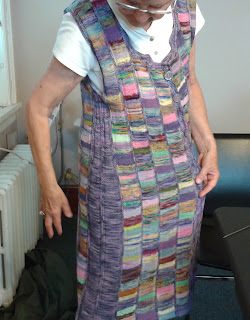 Being wider at the bottom than the top, those two strips provide sufficient room for the hips.  Knit entirely in Koigu  each strip combines many different skeins.  Tons of ends to sew in, Ingrid said.  She especially likes the front neckline which she shows off below. 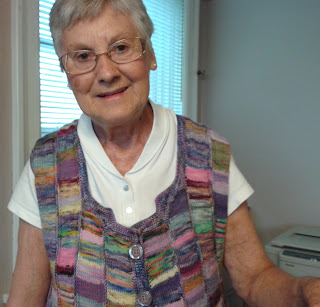 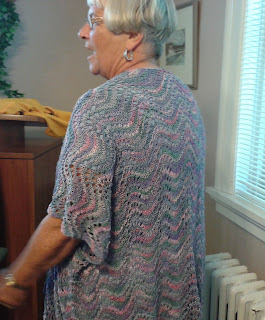 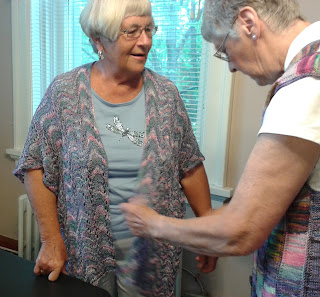 This she hopes to wear often next winter in Florida.  I imagine you will, Carol.

Sandy B brought her friend, Christina,  with her today.   Christina said she was taught to knit at the age of 8 and between then and now, had only knit one item.  Until sandy convinced her to pick up the  needles again. 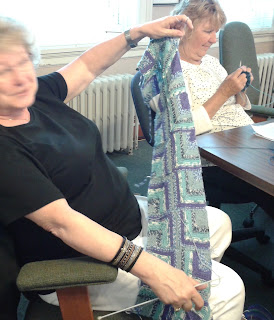 Who but Sandy would have her end a multi-decade knitting hiatus with mitered squares?

Wilma, today,  had one of the most unique pieces I've ever seen.   The Mermaid Blanket. The first of the two crocheted blankets - one for each of her two grand daughters - is finished. 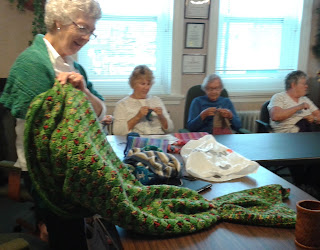 A bit too complicated for me to envision, Wilma had to crawl into it. 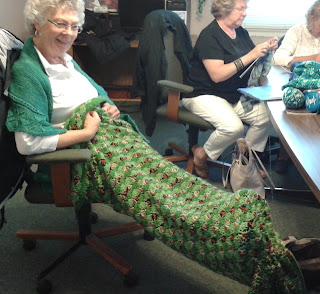 Then show off the tail. 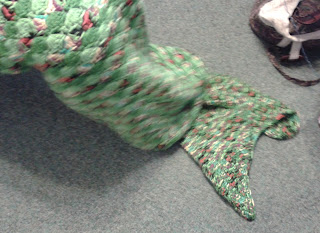 The grand daughters will  love this.

Sharon, home from Newfoundland, showed what yarn/pattern her hubby asked her to buy. 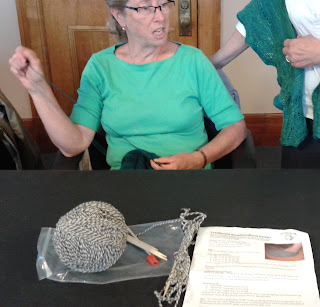 Good ole' Briggs & Little for a pair of warm slippers.  Can't get much more Canadian than that. 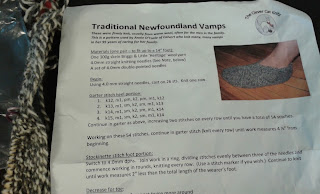 Today may have been my last knit group for a few weeks.   By this time next week, I expect to be deep in prep mode for an early Friday departure for the trek to the trailer in  Hearst.  I will try to
sneak over to knit group, but if I don't make it, have a great summer, Meaford knitters.
Posted by Brendaknits at 7:17 PM

Labels: Thursdays Are For Knit Group 2015

I love the idea of a mermaid tail. While the tail would be a little much, I think about one to snuggle in while watching tv in the evenings in winter.