After All These Years

Son #2, Peter, and his lovely Lady Of Spain came for a weekend visit.  One of the things he wanted to do, while here, was to join his Dad at the weekly 'target shoot'.

Fred belongs to a group that target shoots every Saturday afternoon, January to April. Most of the men are hunters and target shoot to keep their skills honed for next year's hunt.  Fred goes for the camaraderie.  The 4 inch target is 100 metres from where they shoot.  From that distance, Fred says it is a speck.  His aging eyes prevent him from getting a high score. At least,  that's his story and he sticks to it.

I learned years ago, by raising Peter and his brother, Charles, that  you can't keep boys from being boys.  They were raised during the 70s and it was, at least in Canada, an anti-gun era.  Guns  were forbidden in my house.  Toy guns or real - they were not allowed in my house.  Without the mass-produced, plastic variety to play with, my boys, at lunch time,  would bite their peanut butter sandwiches into gun shapes and 'shoot' each other all the way through the meal. So much for my example.

Digression aside, when Peter and Fred were  putting on warm clothing,  getting ready to head out,  Peter thought  he should wear another layer.  He surprised me by digging this oldie from his bag.  It took a bit of head scratching, but eventually I remembered that I had knit him this  sweater  -  the first Cabin Fever sweater I ever knit  -   in 2002.  It was knit with a  Patons chunky weight yarn that I recall having  an iconic Canadian name.  Something like Banff or  Muskoka or North.  Both the yarn and the store where I purchased it - the Hearst Northern Store - no longer exist.

The sweater is 13 years old.  AND HE STILL WEARS IT!!!!!  Woo Hoo.  What an invitation to keep on knitting.

Home from the shoot - at which Peter scored much higher than weak-eyed Fred -  I snapped this photo. 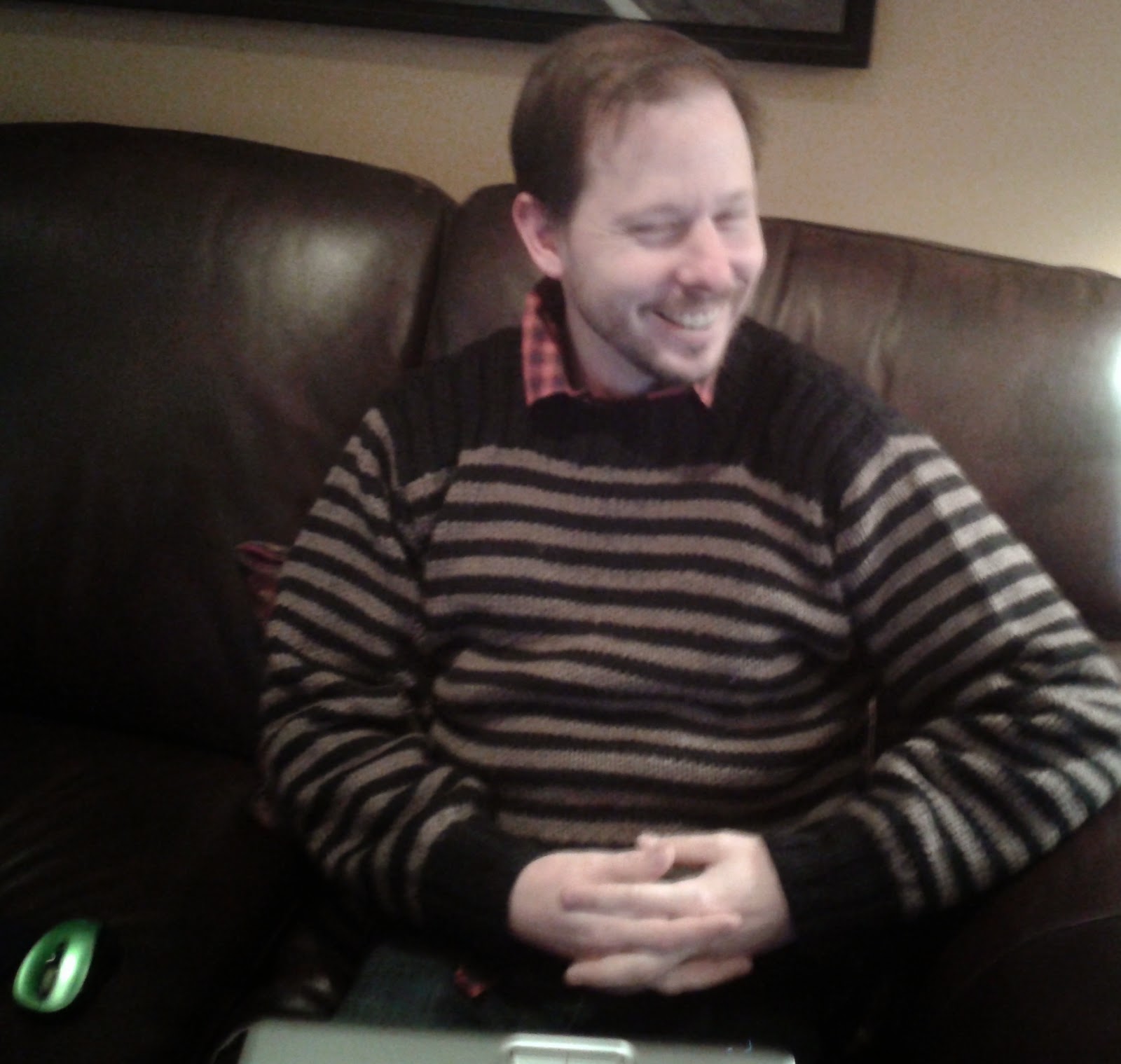 Posted by Brendaknits at 9:46 AM

Aaaand he's an ARTIST and he wears it!!! That means not only is it warm but he likes the way it looks! Now that is high praise indeed!

That is an inspiring story, complete with substantiating photo. Congratulations to the knitter and to the discerning son.

I think that is fantastic. I know what you mean about guns. Do you recall the Tupperware toy that made into several animals? The little yellow tail was a gun. I have always taken comfort in the fact that they also took the rubber pretzel shaped teething ring and made it be a steering wheel. Little Boy. Big Imagination.

I thought I recognized that sweater. An old design, looking just as good today on your son, as it did 13 years ago. Thanks Brenda.