It Pays To Read Ahead

Last night I began to  'finish' Moose Eh!  Beginning with sewing the shoulders together with a three-needle bind off 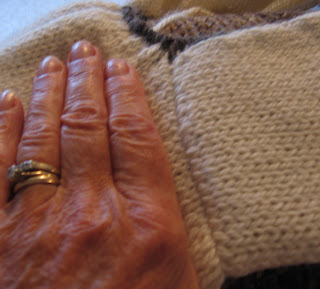 I then moved on to picking up the stitches for the collar.

The pattern said to 'pick up and knit 101 stitches along the right front edge, 32 across the back neck and and 102 down the left front edge'.

101 stitches!!  That's a lot of counting.  Some serious math would need to be done to make sure they were evenly spaced.  Or - I could just do a three-for-four pick up.  After all, I'm not a new knitter, the three-for- four has worked for me in the past.  Elizabeth Zimmermann would recommend a similar strategy.  It would be much easier than marking equal sections to ensure that the 101 stitches get picked up evenly.  So what the heck, why not? 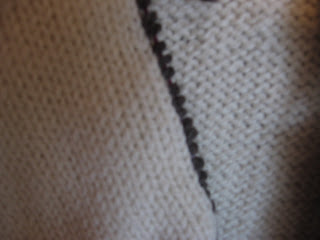 Once that pick-up step was out of the way, I turned back to the pattern for my next bit of instruction.    It read  'place markers after stitches 61 and 163'.  Oops!    Those markers indicate the points in which the knitting wraps and turns to form the short rows that will in turn shape Moose Eh!'s  shawl collar.

Of course, with my three-for-four pick up ratio, I had no idea how many stitches were in my front edges. I just knew that the ribbing would neither  pull nor flop.  Not good enough, it turns out.   If the number was off from the pattern numbers by much, my shawl collar  would be hanging off to one side.  Hmmm!  What were my choices?

I could either count my stitches, and if out - which of course they most probably would be -  adjust the marker points to correspond with my stitches. All of which would be a  c- - - shoot.  Or  I could take out the pick-up row and do it according to pattern.

I hate those times too - when I think I'm so smart, then reality sends me crashing to earth...

Sometimes going to bed is the best option. Did you have your answer when you woke up?

oh, I feel you on this!! that happens to me more often than I'd like, because I utterly loathe picking up more than 50 stitches on anything, and having the whole sweater in my lap while I knit around over and over again.