It was the Bulky Asymmetrical Cardigan by Knitting Pure and Simple that I chose for car knitting on the drive home.  Being bulky - well, chunky really -  it knits up very quickly.  One and a bit sleeve to go and it's done. 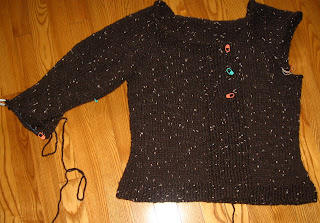 But there are issues.  The front neck is Very Low.    Not that I didn't see that in the picture, but sadly, seeing and registering are often two different things.  It has occurred to me that bulky being bulky, Asymmetrical  probably won't be an indoor sweater.  But with that very low neckline, it won't be the best outdoor sweater either.  That  openness could be  stuffed with a scarf I suppose, but I'm not sure I want to mar the simplicity of the design by stuffing the top with a scarf.  I  can't quite envision it.

Then there is the issue of button/hole placement.  In the picture I've put markers where the buttons will go.  Looks fine, lying flat.  But  on me and my short frame, the 'buttons' seem to end too low on the sweater to truly replicate the beauty of the  'three-buttons-at-the-top' design.   Shortening the sweater from the suggested 25 1/2"   to my standard 'long-sweater' length of 23 inches  obviously shortened the distance between buttons and bottom. No such luck that I might have realized the  shorter length would require shortening the distance between buttonholes.    Dang!  Ripping back to above the sleeve join to redo the buttonholes doesn't appeal to me.  I am considering stitching  the button holes closed and using a pin.  Could work.

Then - point three - there is the flaring/swinging bottom.  The sweater has normal, waist shaping - decreases above the waistline, increases below it.   Those increased hip stitches, done in chunky yarn,  in seed stitch,  falling exactly at my widest point?  Not pretty.  After all  - bulky means bulky.

There will be ripping.  And a note to my knitting file - no more sweaters in thick yarn.
Posted by Brendaknits at 3:38 PM

Can't help with the other problems, but that low neck is crying out for a light t-shirt or cami.

for that very reason, I only knit lightweight sweaters for indoor use. Bulky = coat-type sweater. But the colou is really lovely.
Could you add a cowl-ish or funnel type collar to the front for warmth?