Thursdays Are For Knit Group And Survivor Starts Tonight

What a fabulous 'show and tell' time we had a knit group today. Those of us that went to the Kitchener Waterloo Knitters Fair had lots to show and say. Doreen said she hasn'tyet stopped talking about her day. Not an uncommon reaction from first-time fair goers.

But there was knitting today.

Wilma is at that 'oh-so-exciting' stage of picking up 398 stitches around the edges of her daughter's sweater. Smart though, she marked it off into sections. 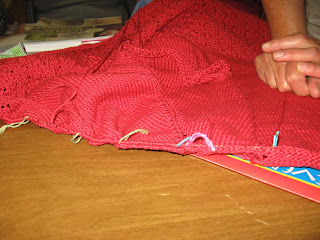 And she's still smiling. Not every knitter would be. 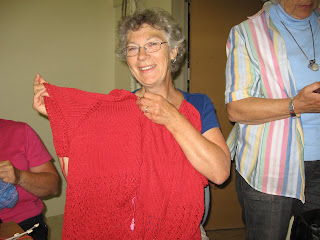 Pat was back after a long absence. She hasn't been feeling well so we were especially glad to see her today. Still knitting toys. Look at her elephants. 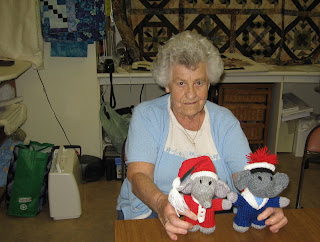 Pat told of one little fellow who, when he saw her elephants, asked her if elephants have an elephant Santa Claus. Pat assured him they most certainly do. I don't know who smiled more, the knitter or the child.

She also brought this wonderful scarecrow. Just in time for Meaford's Scarecrow Festival. 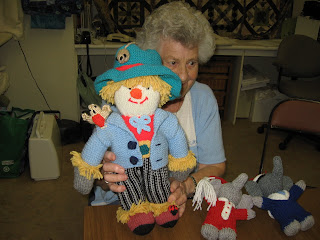 Quite a different set of dangers lurk when having knit group meet at the LYS rather than the library. At the library, the most damage a knitter could do after the meeting would be to borrow a book. At the LYS, well, look at what was on the table. New sock yarn. Aren't those colours gorgeous?

Oh so virtuous, me, I resisted. Many didn't.

Now off to watch Survivor. Fall has begun.

Posted by Brendaknits at 6:49 PM

Love those elephants!
Inquiring minds need to know - were you working at a yarn store???