It started with the Blue Jays.  I have always wanted to go to the home opener - the first game of the season played on home turf.  Having purchased enough Jays tickets to now be on their 'special' email list, I received notice in late January, while in Florida, that I could buy home opener tickets before the ticket booth opened to the crowds.

BUT - dang if they didn't hike the price of those tickets.  Tripled the cost for the home opener.   I settled for home opening weekend and bought regularly-priced tickets to Sunday's game.  In the end, it turned out for the best as that was the only game all weekend that the Jays won.

Son Peter and his lovely 'Lady of Spain' hosted us in a role-reversal weekend.  When Peter was young and came home for the weekend, Mom and Dad operated the 'hotel' while  son came and went, popping in from time to time to sleep and eat.  This weekend, it was the reverse.  Fred and I popped in and out, Peter cooked and hosted.  Pay back! 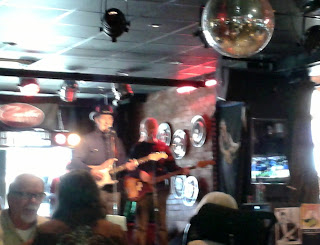 From Peter's place, we can walk to see Danny Marks, now playing Saturday afternoons at the Cadillac Lounge on Queen St West.  A few young families were in the crowd this past Saturday.  Danny treats the kids well and even had this little guy up playing the drums. 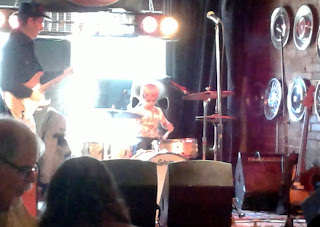 Sunday, we were off to see the Blue Jays 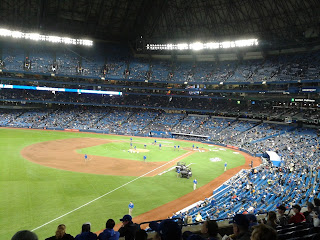 and feast on fat, hot dogs, fries, nachos and licorice.  Can't beat that! 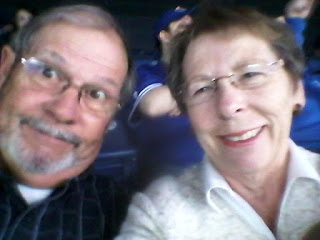 And the Jays won!  Great fun.

There was car knitting, both coming and going.  I'll tell you all about that tomorrow.

'Sounds fantastic! Amazing - all the young families living downtown now. So glad you saw the winner!