The Knitting Gang, at the LYS where I work on Wednesdays, decided they wanted to learn to do some thrum knitting.   Trying to lead by example,  never one to be left behind, I decided to knit along with them.  Take a look at the beginnings of my thrummed hat. 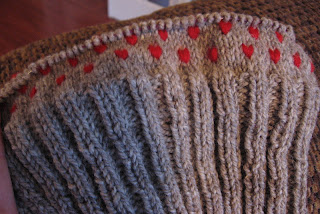 Using some Briggs &Little yarn and roving from my stash, and  my Need A Hat book for stitch count,I just finished my second row of thrums.

There are various ways to create  thrums,  but  I chose to pull  - rather than cut  - the roving at a longer than necessary length. 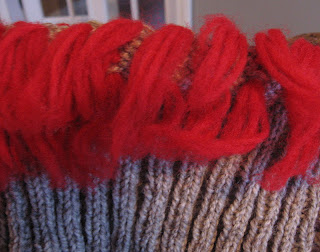 Once the hat is  knit, I will  cut the thrums off evenly leaving them just long enough to fill in the naked   un-thrummed rows.

Like the many ways to create thrums, there are  also many ways to  insert them.  I chose the easy method - surprise, surprise.  Working with a multiple of four stitches, I knit three stitches with the yarn, then one stitch with the roving.   When ready for the  roving stitch, by folding the roving in half and laying it on the needle, I simply knit with it rather than the yarn.    The yarn crosses behind the roving to get to the  next stitch, thereby anchoring it.  The disadvantage of this method  - so I'm told - is  IF the thrum happens to pull out, there is nothing to hold the stitch.  It could drop.  However knowing wool's propensity to stick to itself, I find it hard to imagine that happening.

You can see, in the upper photo,  my four-inch deep ribbing.  I wanted it deep enough to fold in half over the ears.  My thinking was,  if  knititng a double-layered  hat (a layer of yarn on the right side and a  layer of thrum tails on the inside)   shouldn't the ears be covered by a double layer as well?  I think so.

It has been a long time since I have knit somethng with thrums.  It is fun.  And while the hat isn't  my style, it will be a very wam one for someone.  Any grand kids raising their hands?
Posted by Brendaknits at 12:00 PM

Thrummed mittens are so warm so I imagine a hat will be super cozy!

I've only thrummed mitts, but a hat would be super warm! Don't trim the thrums - they'll felt down to a nice layer, especially with the pulled ends.