Family and friends have been calling and emailing to ask about our snow. Do we have any yet? Are the roads open? Have we been skiing yet? Well, let's just say OH MY GOSH!!!

December 2nd, it started snowing here and it stopped for a bit of a breather on December 10. In that period we received 124 centimetres. That's 50 inches for those of us that still speak Imperial.

Yesterday it started again. The weatherman predicts another three days and 30 centimetres of snow. It is a good thing that Fred likes - or at least he used to, an overdose can kill any one's enthusiasm - using the snow blower. He has done little else for the last 10 days. Besides the driveway and the sidewalk to the front door, we are the only people I know that must also shovel the deck. We have a hot tub out there and if the snow isn't shovelled, the hot tub is impossible to access. Would Fred care? Nope. He's not a hot tub guy. It's me that likes the hot tub. There are just enough steps to the deck to prevent Fred hauling up the snow blower, so he shovels. During this never-ending snow storm, he almost gets the entire job of driveway, sidewalk and deck finished before it needs doing again.

And no, we haven't been skiing. Although the hills are just twelve minutes from home, we can't get there. "Oh Canada, we stand on guard for thee" An easy job really - who the heck would come here?

It's impossible for me to convey the snow depth without braving the cold to take a measure tape to it, like Londoner Patti Ann did and I have no intentions of doing, but here are a couple of hots. 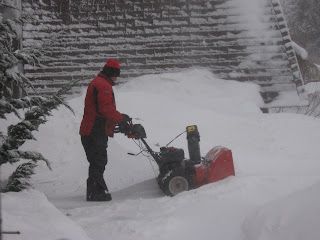 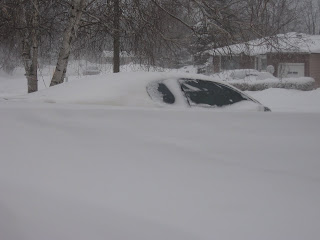 To say that I've had lots of knitting time, would be an understatement. Good thing, too, as I've promised Number Two Son, Peter, a sweater for Christmas. The storm and the sweater were started the same day. Peter chose Avast from Knitty. 14 of the 16 body inches are finished 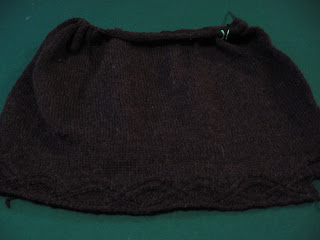 and both sleeve cuffs started. 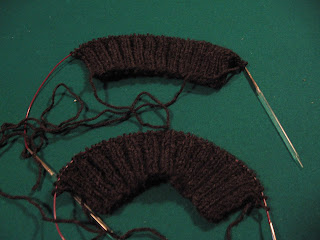 With house-bound hours in front of me today I am going to see if I can get identical gauge on the machine and do the sleeves the quick way.

Brr! I'm a fan of dramatic snowfalls as long as I have lots of knitting to keep me occupied! I'm in Toronto and we've just had rain all weekend, I'd much rather have snowbanks. Good luck with the sweater - it's real nice one, I'm sure your son will love it!

I was trying to figure out where in Canada you are (can't remember). That's lots of snow. Here in Vermont we had 33 inches last winter in one weekend.

My first winter here in Vermont (1969) was awful. Storms so bad that travel by snowmobile only was allowed for several days the week of Christmas.

And that is why we live in Beautiful British Columbia!!! Cliff and I loved your post today, very funny but oh so true. Don't get too much more snow or Fred will have to tote that snowblower on to the roof.

Oh my goodness! And I was feeling sorry for myself, being a California girl stuck in this huge snowstorm in Minnesota and its aftermath. (Where I am now is about the same latitude as Toronto I'd guess.) We got close to 20" on Saturday, but that's really nothing compared to how prolonged your snow is. Geez! What a good time to sit and knit for a while!