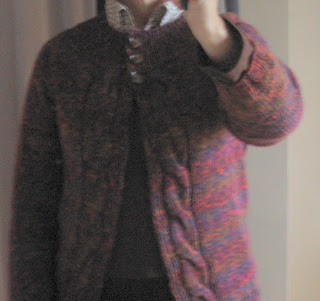 Mono Cable is done. A successful knit. I"ve worn it once already to lots of compliments - of course that was at knit group and knitters are great compliment-ers. 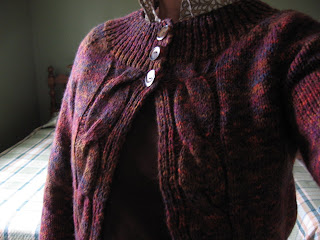 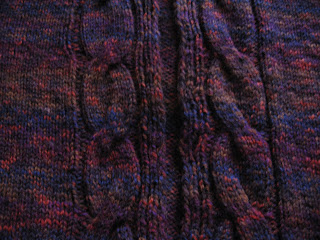 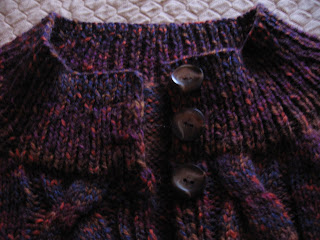 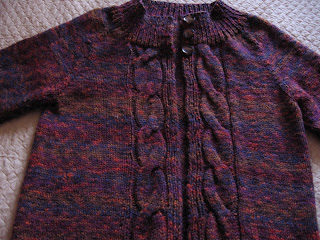 Mondo Cable Cardi - Deets
Yarn - Vienna 8 1/2 balls. The same yarn I used for the poor shrunken Shalom. Shade 604. (The shade on the web site is much more accurate than my photos.)

Mods: A Few.
The pattern called for a bit of an A-Line shape which I eliminated. I am too short and too 'not stick-straight' enough to look good in A-Line.
The collar was also modified. The pattern called for it to be knit at right angles to the body, picking up one body stitch with each collar row. That seemed much too complicated to me. Instead, Ipicked up stitches around the neck and knit until I liked the length/depth of the collar.
The ribbing was to be 5 x 1. But it curled so badly that I converted it to 4 x 2.

Mondo has been blocked twice. The first time, I blocked 'a la' Deb Gemmell by pinning the sweater out to size then placing a damp towel on top. The end result was not quite severe enough to showcase the cable. The second time, I turned the sweater inside out, stretched out the cables slightly and blocked with my steam iron using the hovercraft method.

Does this sweater have a 'story'? Why yes it does.

The pattern first caught my attention on the 'net'. I loved the simplicity of the design - a cabled sweater without too much fuss or bulk. The 'de jour' styling of just a few buttons at the neck, the couture ribbing at the bottom and all in my recent, favourite, sweater type - Top Down.

At this point " two roads diverged". One road said. "I don't need a pattern for that sweater. I could figure that out by myself." Especially with the book 'Button Up Your Top Down' by my side as a guide. The other road said "Do I want to be bothered to figure it out myself, when the cost is only $5.95 USD." In the end, my lazy nature won out.

But I might as well have saved my money. The pattern was so confusing - using terms I hadn't seen since grade 9 sewing class, like 'bodice' and never mentioning the back at all - that I ended up doing a spread sheet to get me through the neck and top portions until it split at the underarms. 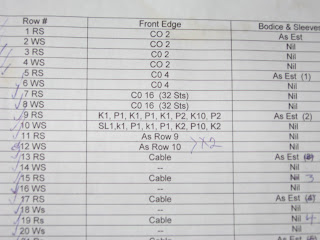 When almost through that confusing section I received an updated version of the pattern via email. Admittedly, the new version was much more straightforward, but too late for me.

On the 'net' I couldn't quite see the cable and thought there might be something complex about it that required the pattern for explanation. But it turned out to be a simple 12 stitch right/left leaning cable. Since I changed the complicated collar construction and the curling rib, there wasn't much about the pattern that I couldn't have 'created' myself.

I hesitated to post these negative thoughts, as I know - or at least have heard - how hard designers work to develop their patterns. Ravelers rave about Bonnie's patterns, so once again, I feel 'odd knitter out'. IMHO this pattern had little going for it. So little that I would have to be 'pushed' to purchase another from this designer. When I compared the pattern to 'Lady Grey' from BUYTD - there was no comparison.

Still, 'all's well that ends well'. Mondo is a great sweater. It will gets lots of wear this winter. The yarn is warm but not heavy and the styling current. I'm happy. Out $5.95 USD, but happy.

Posted by Brendaknits at 8:54 AM

I think well considered, informed comment that shares personal experience with a pattern is totally appropriate. There is no way its always going to be all positive. Designers who give their patterns away are one thing but business - knitting or otherwise - is business. The customer is always right! (And that sweater is fab - whatever your struggles with the pattern!)