Company came.    A couple of weeks ago, I received an email from Zieknits in Indiana.

She wanted to let me know that she and her husband were planning their  annual 'Grey County Fix' vacation and that she would drop into knit group.  Yippee!!  We love company.

Then just this week, I received an email from Elana,  Moe (Mother of Elana) and Maryanne. 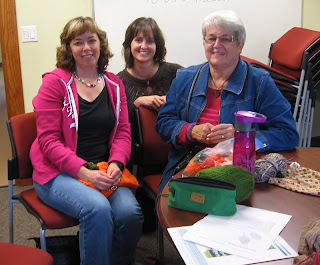 Southampton knitters planning a day trip with a stop at  Meaford knit group as well.  Lots of company!   Lots of fun!

These Southampton knitters don't let any opportunity to boost their community pass them by.    Here they advertise this weekend's  Port Elgin Pumpkin Fest in true knitter fashion. 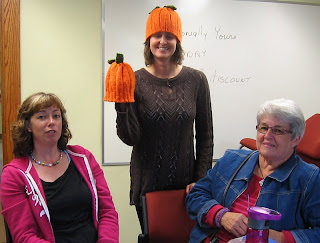 They told us the very sad news that the Southampton knit group is on life support.   So here is your invitation, Southampton.  If you knit, want to knit, used to knit, have ever thought about knitting,  know what knitting is or once saw someone knit - go your local  Library on Wednesdays.  Elana will be there.  You  could be having this much fun on the shores of Lake Huron!  Grab your needles and go!
Wilma had two neat things to show us today. Most important was a  picture of her British Columbia Grand daughters wearing their Grandma-knit tunics, hats and mittens.  Aren't they the cutest? 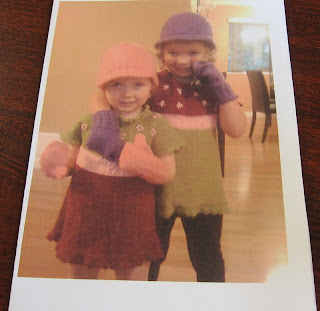 Her other piece of 'show & tell' was more funny than adorable.  Wilma has solved the problem of knitting in the car during night drives or knitting in darkened movie theatres.  She has  needles that light up.  Stranger than fiction and you heard it here first, folks.  Knitting needles that glow in the dark. 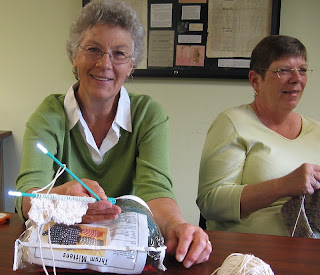 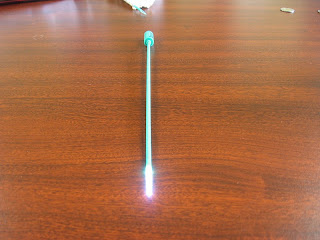 Sharon has a great start on a pair of Zauberball socks. 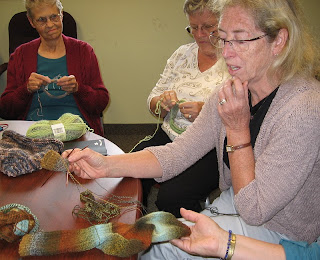 Nice, but not identical, which disappoints Sharon a bit.  I have heard that with Zauberball yarn  it is difficult to get identical. Has anyone else heard this?
Poor Joanne. She injured her ankle on a Bruce Trail hike this summer and it is healing very  too slowly. 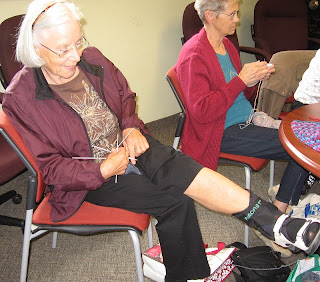 She is now in a new-fangled cast and can get around well, but no hiking for awhile.  The silver lining in that cloud starts with yarn and needles, Joanne.
We got rid of Ruth's mug-shot look.  Much nicer when you smile, Ruth. 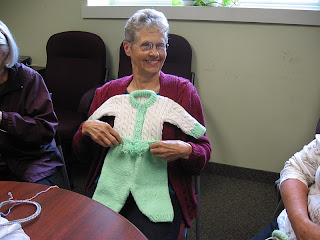 Oh - and cute little knitted outfit too.
With company - international company I point out again - knit group was enthusiastic, loud and fun!   Right next door to our room at Meaford Hall, voters were coming and going at the Advance Polls.  We were hysterically quite loud at times.  I wouldn't be surprised at a higher-than-normal number of spoiled ballots.  If my preferred candidate doesn't win, can I blame knit group?
Part of today's fun came from  trying to guess what Ingrid is knitting. 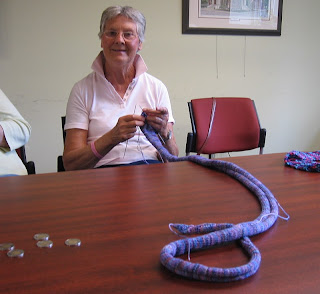 We still don't know.  Our  My comment was so rude she chose not to tell us.  To be continued.
Posted by Brendaknits at 7:33 PM

If your rude comment was what I think it was, I want to meet the man!!